Pentax KP vs K-3 II: Do we have a new flagship?

Yesterday Ricoh Imaging announced the Pentax KP, an advanced weather-sealed DSLR with an intriguing all-new look and a slim body.  Many Pentaxians have been longing for a replacement to the aging Pentax K-3 II flagship— is the Pentax KP the answer?

In terms of specifications, the new KP has several new features not seen before in a Pentax APS-C DSLR, including class-leading sensitivity up to ISO 819,200, electronic shutter up to 1/24000s in live view, new bracketing options, new focus peaking options, and 5-axis Shake Reduction II.  Many of its other features are derived from the flagship K-1 (PRIME IV processor) or K-3 II (autofocus).

Pre-Order Your Pentax KP today for a chance to get it for free!

The KP's 24 MP imaging sensor is of a new design which allows a top ISO of 819,200, which is significantly higher than the other APS-C models in the current Pentax catalog.

While the KP has a more than respectable burst rate of 7 FPS, the K-3 II is still the king of the hill with 8.3 FPS and a buffer accommodating 60 frames (JPG), where the KP can hold just under half that.

Looking at ports, the K-3 II has 2 dedicated IR ports, whereas the KP seemingly has none at all.  The K-3 II also has an HDMI port, whereas the KP requires a USB SlimPort adapter to achieve HDMI output.  The KP similarly has no dedicated cable release port, instead relying on the CS-310 dedicated cable switch that plugs in to the microphone port.  Fortunately, Wi-Fi has been added to allow remote shutter release via the Image Sync app— something the K-3 II lacked.

The KP has a more customizable interface with five USER mode settings on the exposure dial and three control wheels like on the K-1. It also has a pre-programmed HDR mode. Many users will probably apreciate that a built-in flash is back, albeit at the expense of built-in GPS. The GPS fuctionality and iconic Pentax astrotracer can easily be obtained through the O-GPS1 accessory, though.

Speaking of the flash in the KP, it has a low guide number (6), but we can confirm that it can be used as a wireless controller when paired with compatible P-TTL flashes. 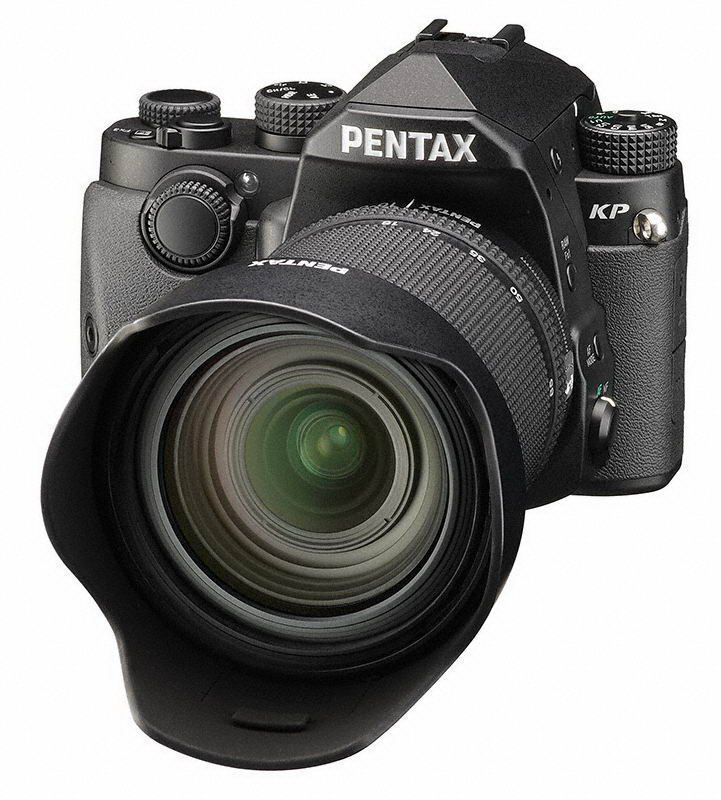 The grip on the body is exchangeable and available in three sizes (small default grip pictured). A battery grip is also available. The battery grip includes storage spece for a spare SD card and takes the smaller D-LI109 battery like the one the KP uses internally, or the larger D-LI90P battery.

The KP is being launched at $1099 in the US, a middle of the road price point for enthusiast models. The price seems fair given the new features.

Like most Pentax DSLRs, the KP is fully weather-sealed and designed for outdoor use.  The rear monitor tilts up and down which is a great help when using live view for e. g. macro shooting. The monitor has the red light mode that doesn't ruin your night vision when shooting in darkness.

Also like the K-3 series flagship bodies, the KP has an external stereo microphone port as well as the SAFOX 11 autofocus sysem with 27 AF points of which 25 are cross type.

Overall, it's clear that the KP outpaces the K-3 II in many core imaging areas.  In other aspects, the cameras share the same technology.  But there are notable ways, mainly related to performance/speed, in which the K-3 II is still noticeably ahead: battery life, buffer size, and burst framerate.

Pre-Order Your Pentax KP today for a chance to get it for free!

Based on these facts, it looks like the KP is still being positioned between the K-70 and K-3 II.  We feel that the "advanced" Pentax DSLR lineup may be splitting up and heading in two ways: the path of the KP, which delivers ultimate image quality at a lower price, and the path of the K-3 II's true replacement, which is faster and all-inclusive.

Of course, we can't know for sure what Pentax has planned.  It's possible that the company wants to remain unique in its offerings rather than competing directly with high-speed cameras like the Nikon D500 or Canon 7D II.  But it would be a shame if Pentax's excellent ergonomics, build quality, and durability didn't make a reapparance in a high-performance crop body, especially when the current full-frame flagship doesn't deliver as much speed.

Following a statement posted on January 26th in which Ricoh describes the KP as a "mid class" camera, we feel that it's likely that we will see another high-end APS-C body soon— likely aimed at a narrower part of the market than the KP.

Learn more about the Pentax KP in the official announcement