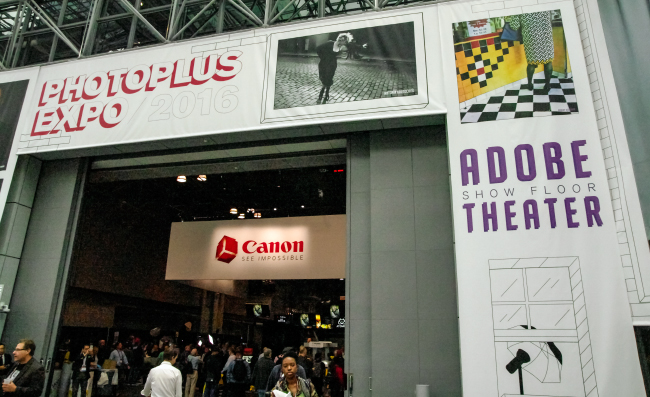 For the past three days, Ricoh Imaging exhibited the latest Pentax and Ricoh camera models at the PhotoPlus trade show in New York.  The booth itself was nearly identical to what we saw last year, featuring the 645Z in the center along with the latest K-mount DSLRs (this time the K-70 and K-1) on either side.  This year, the Theta also had a big presence.  Ricoh's spherical camera line is gaining lots of momentum, and last week we saw the announcement of the Theta SC, an affordable new model with most of the features from the flagship Theta S (released at the start of 2016).

With its 360-degree field of view and solid 14-megapixel resolution, the Theta is an excellent camera for covering trade shows.  We shot the booth tour video below with the new Theta SC, but since Youtube doesn't yet seem to support the Theta SC's 360-degree videos, we manually panned the video using the Theta desktop software:

BigDave, who represented Pentax Forums at the show, also had a chance to sit down for an informal interview with Dan Savoie (Senior Tech Representative) and Martin Shock of Ricoh Imaging.

How has the response been for the K-1?

The K-1 recently had a price increase to bring it up to just over $1,900. Is there a move to increase the price any further?

No, no price increase planned and the last one was due to the Yen-to-Dollar exchange rate.

The K-1 firmware v1.30 was just released. What has been the feedback so far?

So far the response has been very well received. People like the functionalities that have been added, particularly the electronic front curtain shutter feature in live view. Additional upgrades continue to be looked at.

The K-70 was just released and was received well by the markets. What are the plans for the APS-C camera line?

They could not give specifics, but Dan did say that Pentax will continue to develop and improve the APS-C line on various levels.

Moving to the 645Z line, it provides another level of image quality to the Pentax line. Hasselblad and Fuji have recently released medium format cameras near the price range of the 645Z. What are Pentax’s plans for this line?

Pentax will continue to develop the 645Z product line. They are aware of the new cameras on the market and are studying them.

What are the plans for improving US Technical Support?

A call center was added in the US and continues to be staffed and improved. Repair services by Precision will continue as is for now.

The booth also featured a transparent Pentax K-1 as well as its bare chassis.  Click on any thumbnail above for a larger view.

While PhotoPlus didn't bring any other Pentax-related news, we did stumble upon the IRIX booth.  Irix is a new lens manufacturer that plans to introduce a variety of quality manual focus lenses for Canon, Nikon, and also Pentax.  The first lens— a 15mm F2.4 ultra-wide— will be available for purchase shortly.  We plan to monitor and report on its availability.