(Editorial note: this is a first-hand report from the Ricoh Imaging / Pentax booth at PhotoPlus 2017 by Jacquot, a forum member, in cooperation with PF editors and Ricoh Imaging.)

I had the opportunity to sit down and speak with Jodi Palm of Ricoh Imaging as well as some of the gentlemen tending to the displays at the booth.  I told them there were a lot of Pentax Forums members who are very excited about the DA★ 11-18mm F2.8 and D FA★ 50mm F1.4 lenses.  The lenses were not available to hold, and the 11-18mm had some black tape on the barrel.  I asked what that was covering and they could not tell me; it seemed to be concealing the end of the lens name and some switches on the side of the lens.  The 11-18mm is definitely seen as a professional lens to supplement the APS-C line-up, not as a replacement for the 12-24mm F4.

Then I asked about the Theta V 360-degree camera.  Jodi explained the capabilities of the Theta V ($429) and the Theta SC ($199) were quite different.  The V can record 25 minutes of 4K video and can live stream.  The SC has reduced video capabilities (5 minutes and lower resolution), though the two are similar for stills.  They are really targeted to different users and not competitors.  Ricoh did not comment on other manufacturer's products (there are cheaper 4K options out there), but said there was a lot of interest in the V.  It is a really impressive camera and there was a steady stream of people looking at it.

There was a waterproof housing on display (shown below) which is safe to 30 meters.  It will be available by the end of November for $199.  All controls are accessible while in the case.

I asked if Pentax was looking at the mirrorless market now given the popularity of the Fuji and Sony options, and the recent announcements by Canon and Nikon.  I also mentioned Leica.  Jodi said that there is no plan at this time for a new mirrorless body.  She said that the Pentax KP was very compact and close to what is available in the APS-C mirrorless market now.  I spent some time with the KP and also stopped by the Fuji booth, and have to agree.  In fact the KP felt better in my hands than the Fuji X-Pro2 or X-T2, which seemed larger and much less ergonomic. 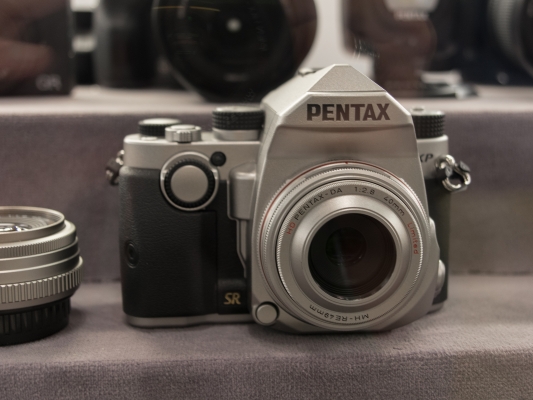 Lastly, I asked about updates to the K-3 II and K-1, and Jodi said that there is currently nothing on the roadmap for new bodies.  I asked if she felt that new designs would integrate UI/connectivity functionality such that those in the Theta V, and she said that each new offering would upgrade usability, and pointed to the KP.

(Editorial note: there have historically been no camera roadmaps, so this means that future plans will be kept under wraps for now.  The two oldest models in the current Pentax lineup are the 645Z and K-3 II.)

She said the response to the KP has been "great."  APS-C sales are strong, and Pentax will continue to support both APS-C and FF as base products.  The new lens offerings and the KP show that commitment.  Generally, she said that Pentax's market has been hit less by the recent downturn than either Nikon or Canon.  They have definitely been affected, but not to the same extent. 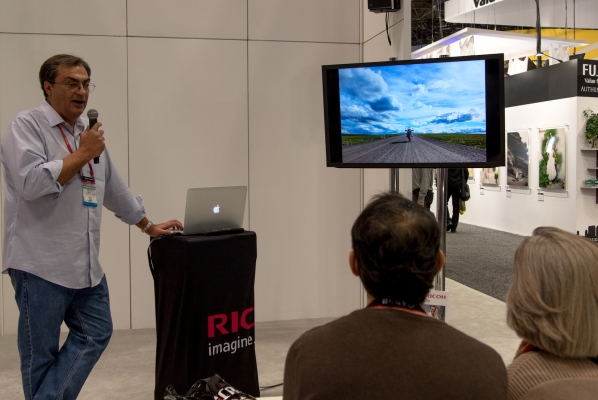 Throughout the day, there was a photographer at the booth giving talks: Ricardo Serpa.  He shoots with the 645Z and K-1.  He presented many photographs, talking about each shot from an artistic and technical point of view.  He explained what he wanted to achieve and how the Pentax system and technology was used for each photograph.  It was a very interesting talk.

To conclude, attending a trade show and talking to the representatives there can be very enriching compared to just reading news and rumors online.  Hands-on experience with the latest products is of course a big part of this.

Here are few more shots from around the booth, including a transparent KP: