Ricoh Imaging (Pentax) exhibited at the Consumer Electronics Show in Las Vegas over the course of the past three days.  The show wrapped up yesterday, so let's take a look at what was shown at the Pentax booth and what new announcements were made.  We'd like to note that since Pentax Ricoh Imaging was re-branded to just Ricoh Imaging late last year, the Pentax logo has since been removed from its corporate identity (and booth branding), but the same great Pentax products were of course still on display.  Note that in our homepage postings, we will continue to refer to Ricoh Imaging as "Pentax".

The sizable Pentax booth was the fifth-largest at the show, behind Canon, Nikon, Sony, and Olympus and the same size as the Fuji and Panasonic booths.

It might come as a surprise that Pentax made no product announcements at the show, but there were plenty of products on display that hadn't yet been showcased at a major show in the US, such as the Pentax K-3 DSLR and HD Limited lenses. Plus, we need to keep in mind that two much more important shows (to the photographic industry) are coming up later this year:

So, we're sure that the key announcements from Pentax will be timed for these two shows (perhaps 2014 will finally be the year of the full-frame!).  We will of course be covering both shows and interviewing Pentax representatives as usual.

Even though there are no new products from Pentax for the time-being, Sigma did announce a new 18-200mm "Contemporary" superzoom lens for the K-mount.

A distinguishing feature of the Pentax booth itself was the "wall of color", which featured all 120 Pentax K-50 and all 100 Pentax Q7 color combinations: 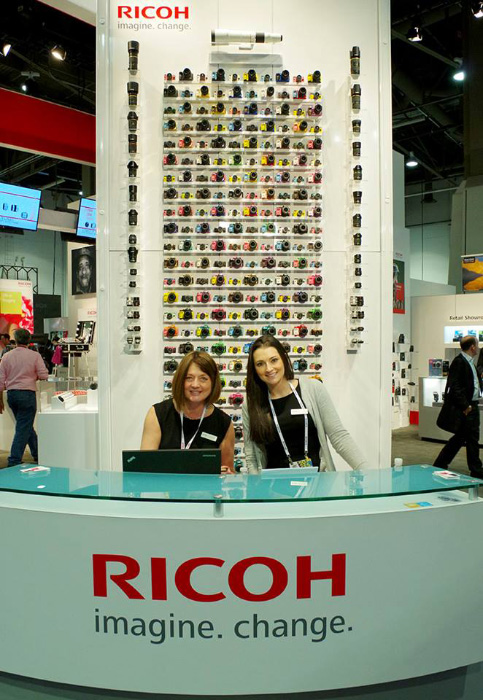 The entire Pentax K-mount and Q-mount lineups were naturally also on display.

Stay tuned for in-depth tradeshow coverage from CP+ in February!  If you'd like to suggest an question for our Pentax interview, please visit this forum thread.