The Making of "Bletchley Park"

Winner of the August, 2017 "Portraits in Natural Light" photo contest

I’ve adapted the writer’s axiom to “write what you know” to my photography: I shoot what I know. My kids are featured prominently in my photos, but like most kids, they don’t always enjoy sitting still for a shoot. I try to limit their “official” photos to once per month, and then they’re often rewarded with a new episode on a handheld device that I can hold off to my side as I shoot. This gets them to look in the direction I want without me having to give directions, and they’re so interested in their show that they forego a cheesy grin.

My daughter had just turned four when she sat for this portrait, and I had chosen her outfit with care. I usually shy away from reds, but this jacket was otherwise so perfectly suited for a photo (textures galore!) that I decided to use it anyway. I usually pick one window in my house that will serve as my “studio” and I refrain from hanging anything at all on the wall behind so I have a relatively blank slate for a background.

I always shoot free-hand (no tripod) with them so I can move about freely as they move their chins, rotate their bodies, etc. I find they’ll naturally go where I want them to if I just move the screen in that direction. The photo was shot with a Pentax K-30 and an smc Pentax-FA 31mm F1.8 AL Limited lens.

Winner of the July, 2017 "Sculptures and Monuments" photo contest

I had no idea what to do with my first DSLR (the K100D). I was terrified to change a lens or blow the sensor, and all the dials and buttons were overwhelming. I quickly decided to do a project with my camera so I could force myself to learn how it all worked together. The project I embarked on was to take a self-portrait every day.

The photo “Solemnity” was taken during the second year of this project. By that point, I had mostly learned my camera (and in fact had moved on to the K200D) and explored tons of different techniques – both with the camera and with post-processing. I had trained myself to always be on the lookout for a good shot for the project because by this point I was desperate for ideas.

I was in Germany and cutting across a residential neighborhood when I came across a small cemetery. I started out by taking a generic straight-on shot of the angel that served as the headstone: 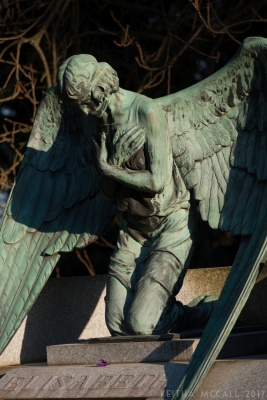 As I walked away from the cemetery, I turned back (and what a great lesson that is in photography – some of the best shots are behind you!). The light bathed the grave beautifully. I took a shot and realized that it might be more powerful with a figure in it:

I never carry a tripod, so I had to set my camera on something else at hand and attempt to frame the shot the way I wanted. I couldn’t quite get that light in the shot with me in it, but I was apparently in a hurry, because I only took one shot with me in it, and it's the one you see here, as it was straight from the camera: 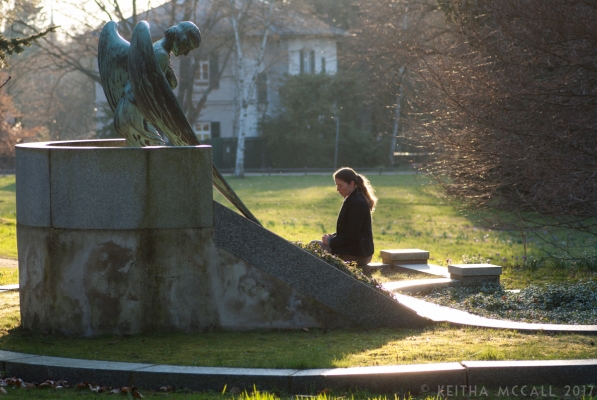 As far as post-processing goes, it looks like I cropped it a bit, heavily burned the right side of the frame, and added a great deal of split-toning (possibly in an attempt to re-create the light I wasn’t able to capture without a tripod). My tastes have changed in the eight years since I’ve taken this shot, and I feel I would process it with less of a heavy hand these days. 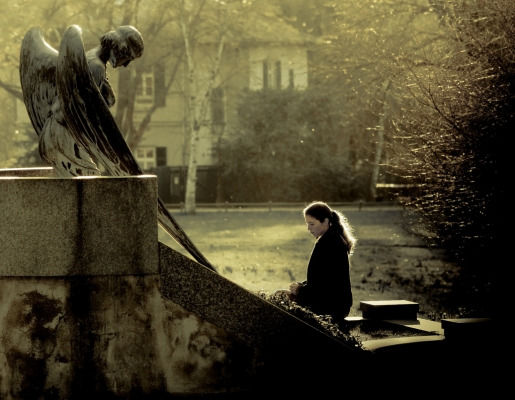 Thanks for voting for my image!

About The Author
K McCall

@Keitha Beautiful picture and very tasteful treatment! I once read a book regarding Bletchley Park. I'm pretty sure its title was...

A masterclass, Keitha. Thank you.

Although I would had preffered to not PP the image, as to be as faithful to natural light as possible, none the less, its a real gem.. First image,...

Hi, tjstimbo, I have an answer for you regarding the title. I was in the midst of reading "Blackout" by Connie Willis (a sci-fi book...

Interested to why it is called "Bletchley Park". I used to live not far from Bletchley Park in Newton Longville or is there some other...