The Making Of "Autumn Colors in a Big-Toothed Aspen Leaf"

How the winning photo of the "Fall Colors" contest was made 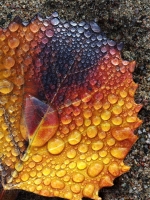 Heartfelt thanks to everyone who nominated my photo, "Autumn Colors in a Big Toothed Aspen Leaf," for inclusion in the Pentax Forum's November Monthly Contest. Need I say that I'm both pleased and honored? I thought not -- but I am.

When the contest's theme ("Fall Colors") was announced, I had something of an embarras de choix. The woods around my home in New York's northern Adirondacks "light up" every October, and my photo archive therefore contains hundreds of colorful "calendar shot" scenics. But the imp of the perverse persuaded me to focus close, instead.

I shot the big-tooth aspen leaf on a small sandy beach alongside the "best dammed little river in the state/country/world" (your choice). It had rained hard all through the night, leaving the many fallen leaves dappled with droplets. The sky was overcast. My goal for the day was to illustrate fossils in the making, and the subject of my shot was one in a progression of images, but I was drawn to this one simply because of its beauty. The gradient of colors from golden yellow to cadmium red to a deep purple seem to me to capture the transitional nature of the autumn season while also echoing the palette of hues in the surrounding hills.

About The Author
Tamia

Thank you all so much for your kind words. I'm humbled.

I can only echo the congratulations of the previous reviewers: not only is your winning entry a lovely piece of art, but also your background story...

The Making Of "Autumn Colors in a Big-Toothed Aspen Leaf"
By wmarkroberts on Jan 2, 2018

Thanks for the story behind the picture. It was my favorite as well ;-)

The Making Of "Autumn Colors in a Big-Toothed Aspen Leaf"
By helmiczka on Dec 29, 2017

Thanks, Tamia, for both the beautiful image and the very well-written text. Beavo!