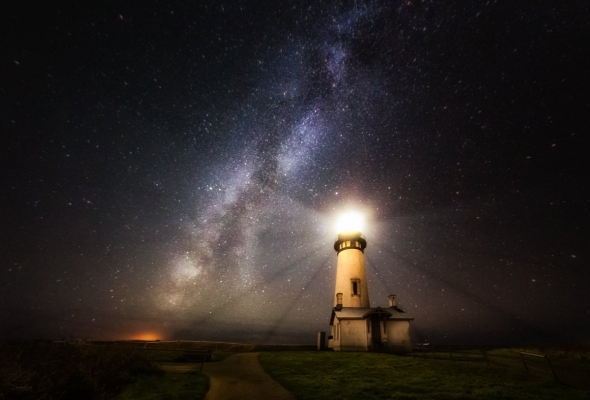 Hello folks, my name is Derek and I have been a long time member of the Pentax Forums. I'm honoured to have won the September “Night Time is the Right Time” photo contest. Thank you so much for your votes! I've been asked, and am happy to share, a little behind the scenes information about my winning photograph.

Back in the autumn of 2013 I was in Oregon and had the opportunity to join a photowalk with Pacific Northwest photography friends. We met up in Newport and walked down to the Yaquina Head Lighthouse in the daytime – it's a very pretty location on the Oregon coast. After supper three of us walked back down to the lighthouse in the dark to photograph it with the stars. It was a moonless night and the Milky Way was surprisingly clear even that we were so near to the lights of Newport.

Because the Milky Way stretched high into the sky, I went super-wide with the Rokinon 8mm f/2.8 manual focus fisheye lens on the Pentax K-5. Locked down on the tripod, I used my wireless trigger to eliminate camera shake.

About The Author
DK77

The Making of "Yaquina Head Lighthouse"
By tbktaylor on Dec 6, 2015

The Making of "Yaquina Head Lighthouse"
By Spodeworld on Dec 2, 2015

That's brilliant, Derek - well done! I was at Yaquina Head lighthouse this summer, on a trip from the UK - but I was there in the daytime.

The Making of "Yaquina Head Lighthouse"
By microlight on Nov 22, 2015

Oustanding! I LOVE these BTS write ups, so thank you :)