A master of surf photography 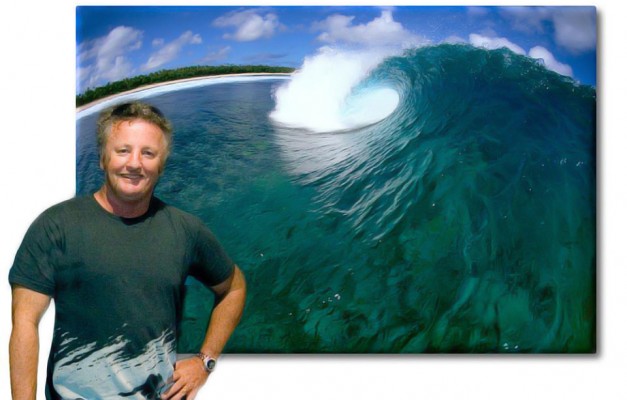 Sean Davey is one of the premier shooters of surf and ocean life photography in the world. He is a native of Australia who now lives on the North Shore of Oahu (Hawaii). Back in 1977 as a teenager he took his very first photograph and has since become a legend of surf photography. He has shot in excess of 140 magazine covers over the years (an average of about 4 covers per year since he took his very first photograph). He has had thousands of shots published in publications around the world, and we've recently had the opportunity to interview him exclusively for our homepage.  We hope you enjoy!

Sean wanted to mention that he owns a Espon 9900 printer and thus prints and signs all of his work personally. He specializes Exhibition Canvas Gloss paper.  Now, without further ado let’s get down to business.

Sean, obviously your bread and butter over the years has been surf photography. That said some of your most amazing work doesn’t even feature actual surfers. Wildlife such as sea turtles and dolphins, seascapes, landscape shots, sunsets, and everything in between increasingly make up more of your portfolio. The common thread there is everything is tropical and generally centered on the ocean.

A: Well yes, the common thread is tropical, but really it's only because I live here in the tropics and do the vast majority of my work here. I really do have a yearning though for the much wilder and remote places like what you typically see Chris Burkhard shooting. My own homeland of Tasmania is one of those places. I am lucky though to be living in such a beautiful place that lends itself so well to my style of photography. I enjoy photographing surfing. It has been my livelihood for more than 20 years, but with the financial downturn, it was no longer a viable option for me to make a living from. Luckily for me, I always had a wider photographic interest than just the surfing itself so I was able to move on to other areas of photography and keep sustaining my livelihood. Sadly surfing plays a very insignificant role in paying the bills these days, but it's not because I don't want to shoot it. It's more about the fact that freelancers have been pretty much wiped out of the surf industry now. The only guys making any money at all are the guys who are working for a company. Pretty much the only true freelancers out there now are guys who really don't need to make a living…

On the surface of things it sounds almost mystical and even a bit unfair that a person would get paid to live in a tropical paradise doing what you do. With that, describe to us the lifestyle of Sean? Have you ever worn a tie in the last five years?

A:Oh no. I honestly can't remember the last time that I had to wear a tie. Perhaps at my brother's wedding, over ten years ago. It is interesting that you pointed out that I get to live and work in what most people would define as a tropical paradise, which it is. The downside of course though is that it's incredibly expensive to live here in Hawaii and so the rat race plays a large part in my day. The need to pay bills keeps me in the office many times when I'd have preferred to be out shooting. It's lucky that I have a preference for the ultra early and late hours of the day. I love the long shadows. I'm an early riser, so I can often get a cool photo shoot in even before the day has hardly begun. Some mornings I'm leaving the beach as the sun comes up. My point is that because I do live here and only minutes from any number of great locations, I can still get a great shoot in, even if it means that most of my day is spent taking care of business, which it often is. I do have a pretty strong creative streak and feel a need to create. Often many of my best images just happen totally unplanned. Those are usually the best images, the ones that just organically happen on their own. 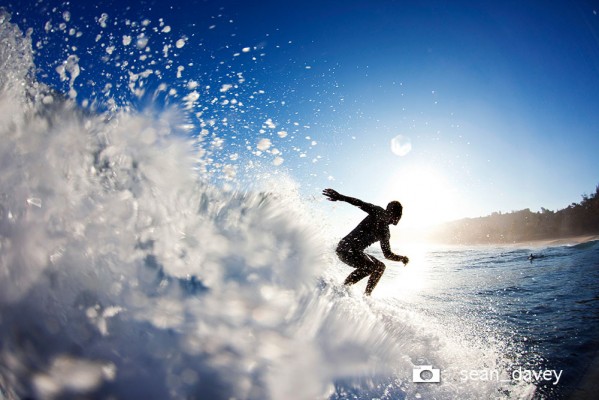 A surfer surfing away from the camera and towards the rising sun at Rocky Point. 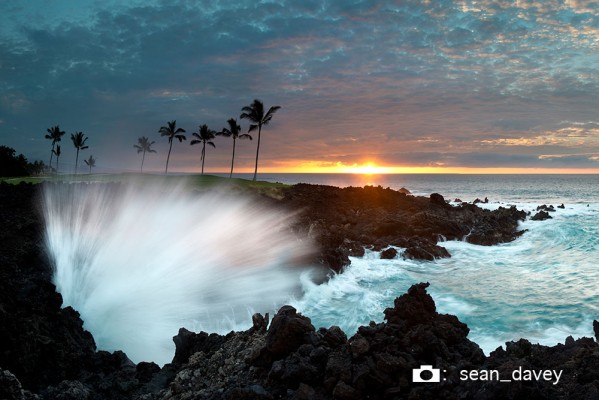 A spectacular sunset on the Waikaloa Coast of the Big Island of Hawaii.  This is actually just half of the full panoramic landscape.

About The Author
alamo5000

friendship with eddie vedder and taking such beautiful photos.... I envy you.

As a hobbyist surf photographer and keen surfer for over 25 years, I've seen hundreds of Sean's images and have total respect for his...

Great interview (pro standard) and the photos are awe inspiring. Thanks for a lift on a gloomy wet day.

Fantastic interview, and the last two photos were the best of the set as far as I'm concerned. Beautiful. Thank you for taking the time to...