The Making of "Avoiding Boredom"

The winning image in our "Just Waiting" photo contest

I would like to thank all of you who nominated and voted for this photo. It felt really great when my picture got into the top 15, not to mention when I was notified that the doggie had won. 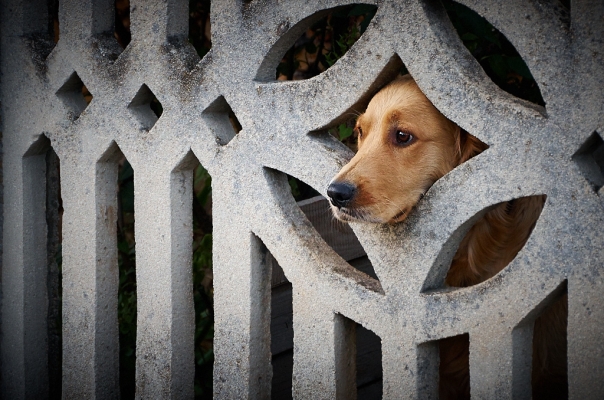 I was already aware that a dog head "built into a fence" would usually be around when one walks by on the street. I often walk by on my way to the supermarket. One day I took my camera with me because I wanted to take a few pictures of him. It turned out to be a sunny day, until I arrived to that specific street.  Soon it became cloudy and the atmosphere got rather gloomy (so much for a fast, far distance shot).

I was a beginner with the DSLR and in the Pentax world as well (I had only owned my K-5II for about a month) so I did not really think much about the settings. I used my camera in TAv mode, and set it to F5.6 and 1/125. I had to hurry, because the dog was shy and not really interested in me getting too close. I only managed to take 2 pictures before the dog left.

At home I looked at the pictures. I was a bit disappointed, because they were dark and flat due to the overcast sky, and the camera had managed to focus on the fence rather than on the head (now that I think of it, I don't really know why I couldn't manage to take another photo, but I guess I have learned that the K-5II has large AF points). I kept the one which was taken from the side.

About The Author
d.v.d

I voted for this but was conflicted because I'm a dog person and couldn't work out in my own mind if I was voting for the photo or the...

The Making of "Avoiding Boredom"
By officiousbystander on Sep 12, 2015

Great shot, it tells a story ! I like the submitted version rather than the original, because it's more focused.