I performed a number of measurements in order to test the RF60's performance. Bear in mind, however, that the following results were obtained using a beta unit. I expect the production units to either match or exceed the performance of the beta unit.

I measured the trigger voltage of the RF60 to be a very safe 3.3V.

The RF60 demonstrated excellent power accuracy, i.e., very small deviations to the target power levels. It easily beat the accuracy of the Metz 58 AF-2. While the Metz showed deviations to the target power levels as large as +0.26EV and -0.21EV, the RF60 stayed within a -0.14/+0.10 EV window and most of the time the absolute error values were less then 0.1EV.

See the diagrams to the right showing the deviations to target power levels in 1/3 EV steps from 1/128 to 1/1.

Moreover, the RF60's response is smoother, i.e., there are less jumps from one power level to the other. This means that local adjustments, e.g., adjusting by small amounts upwards or downwards, will be closer to the desired relative effect.

My tests regarding the homogeneity of the illumination patterns at various zoom levels need to be taken with a grain of salt because the Fresnel lenses of the beta units did not conform to the final production design yet. The diffuser panel was not of the final design either and hence I have not included any shots involving it.

As the images below show, the Fresnel lens of the beta unit set to 24mm (right hand column) produces a light cone that is similar to that of the Canon 540EZ. It is larger overall, approaching that of the Metz 58 AF-2 in size, but has more of a hot spot characteristic and hence in practice may not quite reach the usable illumination size of the Canon.

At the 105mm setting, the RF60 produces a highly concentrated beam, very comparable in size and intensity to those of the Canon 540EZ and the Metz 58 AF-2.

Determining the maximum guide number of a flash highly depends on the measurement method used because it is measured at the highest zoom setting and hence opens up questions of how much of the beam to consider, what weighting to be used, etc.

I hence only looked at a pragmatic comparison of flash power which involved placing all flashes into a softbox and measuring the effective output. In this experiment, the RF60 beta unit produced as much output as the Metz 58 AF-2 which is rated with a top GN of 58. However, note that even very slight variations of the flash head position and/or angle in the softbox influence the result. While I was as careful as possible, I cannot exclude the possibility that the RF60 had a minimal advantage in flash head position and/or angle. Based on other measurements I made, I believe that in practice the RF60 will achieve GNs of around GN38 at 35mm and around GN56 at 105mm. It therefore belongs to the most powerful flashes on the market.

Note that the difference between GN54 and GN58, for instance, corresponds to a mere 0.2 EV difference in exposure (with 1 EV equating to one full stop); a difference that is all but inconsequential in practice. 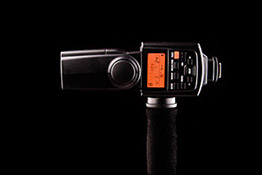