So you decided to take that big step: you want to calibrate your monitor. Maybe you have been told that everybody does it. Maybe you made prints of those fantastic images, and they looked nothing like on your monitor. The reason is not important, but where to start? How to proceed?

In this article, we will walk you through the steps necessary to properly calibrate a monitor by using the Datacolor Spyder4 Express. First, the unit will be presented and described. Then, we will focus on the actual calibration, offering a step-by-step guide that should answer most questions about the process.

Datacolor hold a quasi-monopoly on the consumer screen calibration market. Some other players (for instance Pantone) have offered calibration solutions in the past but none is as commonly used as the Spyder products from Datacolor.

The following table summarizes the differences between the current calibration tools, from a photography point of view.

Datacolor has (as the name of the Spyder 4 implies) reached the fourth generation of its calibration sensors, improving accuracy and consistency over the previous versions. In addition, the color filters used on the calibration unit will show less degradation over time, ensuring a longer life for the unit. Version 4 was released in 2012.

In this review, we will be looking at the Spyder4 Express. The more advanced units offer both hardware and software perks that can be useful for some people, but the basic calibration process will be the same for each. One caveat is that people intending to use more than one monitor at the same time should look at the Spyder4 Pro (calibrating different monitors on different computers is still possible with the Express).

Ready to get your Datacolor Spyder4 Express? Click below to place an order or check current pricing. 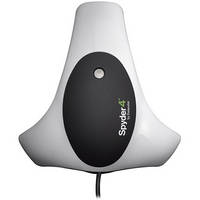