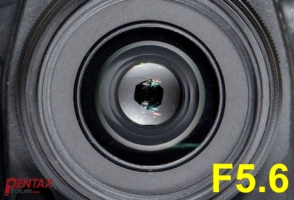 Tip: if you are using a DSLR and your lens has an aperture ring with an "A", setting always leave it set to A and use the camera to control the camera.

Counter-intuitively, the larger the number, the smaller the aperture!

The scale in half stops runs like this - here each number lets in three-quarters of the light of its neighbor to the left:

Watch the animated GIF above to familiarize yourself with the concept of the F-stop numbers running the wrong way.

Tip: When you unpack your new Pentax DSLR it is set to a scale of 1/3rd F-stops. You may want to change that to the more convenient half stop scale in the custom function menu (this will cut down the number of possible settings and save you some scrolling with the e-dial).  For beginners, half-stops are less confusing than third-stops.

No lens has all the F-stops shown above; any given lens covers a smaller range of the scale. As an example, the HD Pentax-DA 35mm Macro goes from F2.8 to F22.

Note: The range of many lenses do not match the full F-stop scale, but starts out or ends at "half stop values" or even at some other value. On many zoom lenses the aperture range even shifts with the focal length set! Fortunately, the light meter in our camera takes this into account and we need not be concerned about it in practice.  Modern metering systems are in fact "stepless" under the hood.

The Effect of Aperture

So what does the aperture do for our images?

The aperture controls how much light to let in. The leftmost image below was shot in the middle of the day and the rightmost image at dusk. At dusk there is less light going around so we opened up the aperture to let enough light in to achieve a proper exposure (as determined by the light meter in the camera):

Think about light as a stream of particles. The larger the opening in the lens the more particles get through in a given time. The darker it is the lower the density of light particles and we must use a larger aperture (smaller F-stop number) in order to let enough particles in to get a correct exposure.

The aperture actually does more than controlling how much light to let in. We're finally getting to the point where we can reveal why we need to be in charge of setting the aperture rather than letting the camera do it for us: The aperture controls the Depth of Field (DoF): the range from near to far in a scene that is rendered sharp (in focus) in our capture. Let's study an example shot with the smc Pentax-D FA 100mm F2.8 Macro and where we have run through the entire range of apertures from the largest (F2.8) to the smallest (F32). Click on the first thumbnail in order to browse through a larger version of the images.  The lens was focused on the closest flower:

These examples show how depth of field is quite narrow at the largest aperture F2.8 and gradually increases as we stop down toward F32. At the smallest aperture, F32, the background is quite defined and we can identify what's there. Which image is best; in other words, which F-stop to use on a subject like this? That's for you to decide depending on how you want the image to look. If your primary goal was to capture the flower, then we would say that F4 and F5.6 have the best balance between keeping the main subject sharp and blurring the background. At F32 the background is definitely too busy and distracting.

Let's say you decided to use F2.8. You proceed as follows: first, set the aperture to F2.8. Then adjust the shutter speed (and/or ISO) until the meter readout is centered. In this example we adjusted the shutter speed from 1/180 of a second through 1/90 s to 1/45 s and left the ISO at 160:

Tip: If you only are concerned with depth of field for a given scene then the Av semi-automatic exposure mode is the logical choice. In Av mode you set the aperture and the camera will set a matching shutter speed (and also adjust ISO if in auto-ISO mode).

We have seen how the aperture affects depth of field. The depth of field also depends on the distance to the subject and the focal length oh the lens. This means that of F5.6 was the F-stop you'd chose for the scene above you would need a larger F-stop to achieve the same narrow depth of field if you were shooting from farther away.

The widest aperture settings on any lens are not as sharp as slightly narrower settings.  Similarly, the narrowest settings such as F22 are not as sharp due to a phoenomenon known as diffraction. Many lenses deliver peak sharpness between F5.6 and F8.

If your objective is to render as much detail as possible with no regard to depth of field you should pick an F-stop where the lens performs its best in terms of resolution and contrast. This could be relevant in connection with product photography for example. Most lenses reach peak performance when stopped down around two stops, but this varies for each lens (refer to our in-depth lens reviews for details on each Pentax lens). Many Pentax DSLRs have an "MTF" program mode that will set the optimal aperture for you based on information encoded in the lens. This program works for Pentax autofocus lenses only.