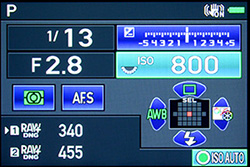 The third and final exposure parameter we have at our disposition is the light sensitivity of the sensor, popularly called the ISO.  Back in the film days we had to change to another film in order to change the ISO. Not so with digital— the ISO can be changed manually from frame to frame should we so desire— or we can let the camera automation set the ISO to match the aperture and shutter speed we have set.

Unlike the aperture and shutter speed, the ISO has no impact on how the final image is rendered other than a high ISO will add grain (noise) to the image and reduce color accuracy/dynamic range, just like a fast film would result in grainy photos.  The ISO is oftentimes seen as a more of a "set it and forget it" setting that you will be adjusting must less frequently than the shutter speed or aperture.  As a result, the ISO is typically set via the camera's ISO button/menu rather than the mode dial.  The exception to this is the Pentax Sv mode, which is just a more convenient way of changing the ISO while retaining P mode functionality.  The Sv mode is found on select higher-end bodies only.

Tip: look for an ISO button or menu to change your camera's ISO.

The ISO scale in full EV steps goes like this:

Your camera will cover some but probably not all of this range.  ISO 100 is typically the baseline sensitivity of modern cameras: the setting at which you get the best image quality possible.

Reminder: the best image quality is obtained at low ISOs, but high ISOs can be a life-saver for low-light photography.  The higher the ISO, the more sensitive the sensor becomes, but this comes at the expense of image quality.

Each successive number doubles the sensitivity of the sensor compared to its neighbor on the left: ISO 800 makes the sensor 1 EV (1 stop) more sensitive than ISO 400.

The scale in half stops on a Pentax K-3 starts out like this:

And if you set the EV scale to steps of a third of a stop you will see this sequence:

Tip: To avoid too much scrolling through values when you change ISO manually we recommend that you set the ISO step to 1 EV in the appropriate custom function.

As we have already mentioned, increasing the ISO will result in added noise (grain), reduced resolution and eventually also reduced contrast. The image quality is also impacted by the noise reduction whether performed by the camera or post processing software. The image degradation is illustrated below with test shots from a Pentax K-3 at four select ISO values (click a thumbnail to enlarge and browse):

Given this image degradation as the ISO increases, why wouldn't we just leave the ISO set at its lowest value at all times?

That's because the ISO setting is a facilitator that allows us to set the shutter speed and/or aperture we have decided is required for our image as discussed on the previous pages.  Modern sensors continue to evolve to deliver good performance at higher ISOs (such as 3200 and above), and modern noise reduction software can be very effective.

As an example, let's consider this photo, taken in the light that was available with a Pentax K-5. It required a reasonably fast shutter speed to freeze the action and be shot hand-held with a 135mm F5.6 lens. We also wanted to stop the lens down at least one stop for added depth of field.  The K-5's sensor is capable of producing usable results at ISO 12,800, so that's what we opted for.  This enabled a shutter speed of 1/60s and an aperture value of F8, which is otherwise a very narrow setting for low-light scenarios. 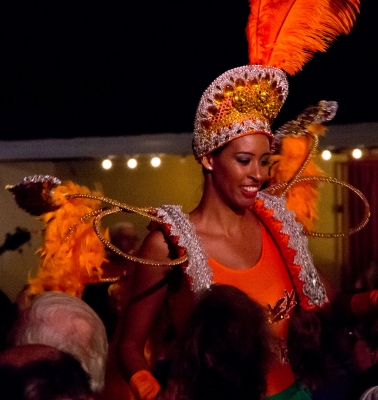 Using a high ISO value makes shots possible at night that were unthinkable to pull off with film. During the day, however, it is advisable to keep the ISO as low as possible given the desired F-stop/shutter speed combination.

Homework: Do some test shots running through the ISO range in daylight as well as at night so as to find the threshold of acceptable image quality for your specific camera.

When working on a tripod where camera shake is not an issue it pays to keep the ISO relatively low, also at night, unless of course you need to freeze a moving object with a fast shutter speed which could force you to increase the ISO. 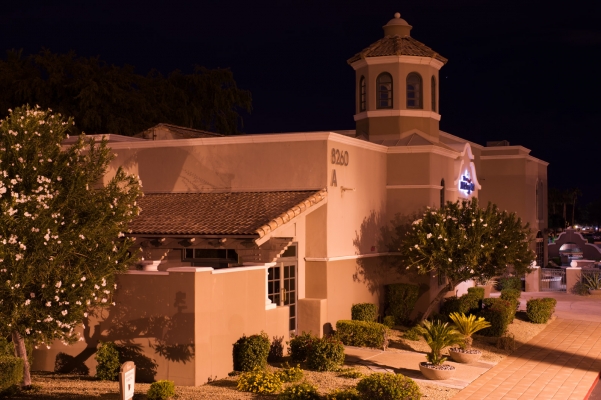 No movement, no wind, so for this image we could keep the ISO low and use a slow shutter speed.
ISO 100, 20 second exposure, F6.3

The ISO setting is a facilitator that allows us to set the shutter speed and aperture that we've decided are optimal for our image. Increasing the ISO comes at a cost, though. As the ISO goes up, image quality deteriorates, but we may have to compromise on image quality and use a high ISO in order to get a particular shot.  After all, a grainy photo is better than a blurry one!

At the lower end of the ISO scale the loss of image quality from one ISO value to the next is small, but when you get above a certain value (camera dependent but typically in the high thousands) the image quality drops quickly. Resolution, contrast (dynamic range) and also color accuracy all suffer at high ISOs.

The primary use for high ISO is hand-held shooting at night; this is an area where digital photography really shines compared to shooting film.