The Fujifilm X20 offers a dedicated movie mode with some amount of customization.  However, manual exposure is not supported: it is not possible to adjust the ISO, shutter speed, or aperture before or during recording.  Also, the exposure compensation dial has no effect during movie recording. The value that was set prior to starting the recording will be used.

It saves .MOV files using the H.264 codec, which is used in the majority of current digital cameras.  During video recording, the X20 compensates for camera shake using its in-lens Shake Reduction system, if enabled via the main menu.

Movie mode is engaged when the mode dial is turned to the appropriate setting: 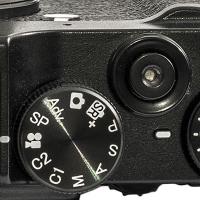 Recording is started and stopped by pressing the shutter button. There is hardly any lag before recording begins. During recording still photos can be taken by pressing the OK button. If the still image format (resolution and aspect ratio) is set to that of the movie in the customization menu, the movie recording will not be interrupted. Still images can also be taken in full camera resolution in which case movie recording will be interrupted while the still image is captured. We found the images shot in the resolution of the movie of mediocre quality and with quite visible compression artifacts, even when shooting in Full HD. This feature is truly for snapshots only. The image also illustrates the quality of the movie and we're not impressed.

Notice how poorly the leaves of the trees are rendered. The movie was even recorded in Full HD.

We have provided another movie in Full HD here (170 MB). It is a big download but if we had uploaded it to YouTube it would have been compressed further and thus not represented the quality of the movie.

While it is very easy to record a movie with the X20 the quality is disappointing.

The movie customization menu can only be called up when the mode dial is set to movie.

As illustrated by the movie mode submenu image, the X20 can record in full HD at 60 FPS, in 720p at 60 FPS, and in VGA at 30 fps. The maximum length of each Full HD file is about 14 minutes and an HD file can be up to 27 minutes.  There are also three high speed recording modes at low resolution. Movies recorded in these modes will be played back in slow motion.

When the Scene Recognition mode is ON the recording is fully automatic and continuous autofocus is engaged irrespective of the setting of the switch on the front. You may even risk that the AF assist light comes on during recording so it is advisable to disable AF assist light in the setup menu before starting shooting a movie. With scene recognition on the camera will select a fitting scene and expose accordingly and face detection is always ON.

When the Scene Recognition mode is OFF you have more control:

Even in this mode adjusting the exposure compensation dial during recording has no effect. The setting prior to starting recording will be used.

Before we leave the movie menu system, let's take a look at two of the more interesting movie mode submenus:

In addition to the menu tab, movie mode features its own Quick Menu screen:

This screen is accessed by pressing the Q button in movie mode prior to starting recording, and it allows you to adjust the following settings:

Zooming during recording generates no noise on the sound track thanks to the manual zoom.

The X20 supports continuous autofocus during movie recording. While still image autofocus is very fast, the movie AF is very very slow, and not responsive or fast enough for any sort of action.  In addition, it isn't possible to take advantage of the X20's macro capabilities in video mode, which is a shame. With scene recognition turned off it is possible to use manual focus.

The LCD monitor looks the following during recording with manual focus: 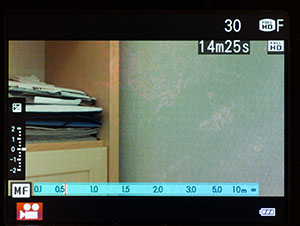 This video sample illustrates the AF speed during recording:

The X20 has a built-in stereo microphone.  The sound quality is very good overall, and the noise from the focusing motor is for the most part suppressed. The volume of the audio can be adjusted in four steps prior to recording. There is even an external microphone input for connecting a Fujifilm MIC-ST1 microphone.

The built-in microphone is however quite sensitive to wind and there is no wind noise suppression filter.

Here's a sample video shot with the X20:

The X20 is great for casual video shooting and fool proof if you keep it in Scene Recognition mode. The high speed modes let you get creative without having to do any heavy post-processing.  We miss a time lapse movie feature as found on the Pentax MX-1, though. For many this is perhaps a more useful feature than high speed movie recording.

Because you can't control the exposure, the X20 can't be relied on for more serious video assignments. Also, we found the compression artifacts quite heavy when recording moving subjects, whereas noise was negligible in daylight scenarios.

We find it a pleasant surprise that Fuji included provisions for an external microphone, but even with the built-in microphone audio is good albeit sensitive to wind.

Concluding, the video quality is acceptable, but not stellar, and the audio is good. However, at the price point of the X20 we probably cannot expect more. We only wish that Fuji had included manual video controls and a time lapse feature. 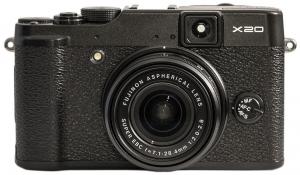