Let’s get this out of the way : the V850 is a very well made flash, its low price notwithstanding. Nothing feels cheap or low-cost about this unit. Both of my test units are well assembled, with no loose parts, weak joints or any obvious flaws. Buttons are responsive, every port or door is solid and operates well. The build quality is on par with the most recent Pentax flashes, and above what one would expect from Yongnuo or even Sigma.

The flash is about the same size as the Pentax AF540 FGZ, the latter being a little thicker and the V850 being slightly larger. 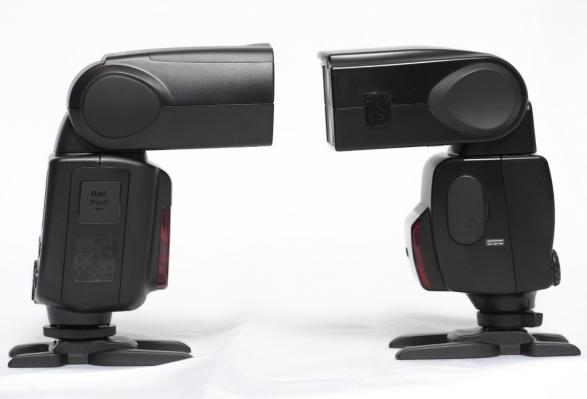 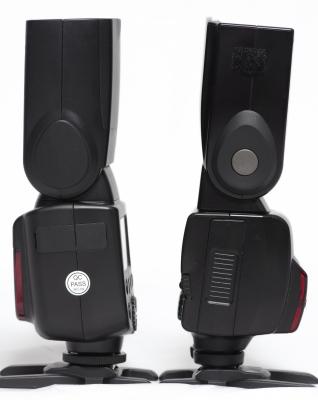 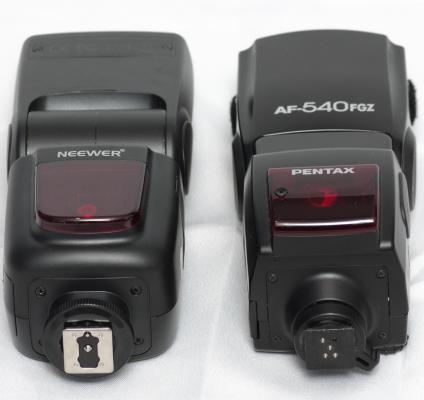 The head of the flash swivels a full 360°, going fully backwards in each direction. Few flashes on the market offer this capability.

Angles are marked on the flash head, and soft clicks allow for repeatable positioning. Rotation is stiffer than what should be expected. I feel that a gasket probably adds to the friction, and should loosen up over time. While this is no problem when mounted on a light stand, it could put some strain on a camera’s hotshoe. Care should be exercised when swiveling the head while mounted on a camera. 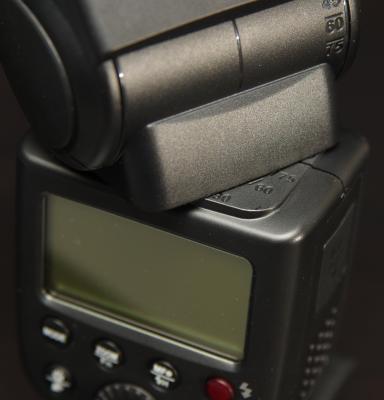 The flash tilts down to -7°, allowing more precise shooting in the center of an umbrella, and up to 90°. There are clear clicks at strategic positions. No button press is necessary to tilt or rotate the head. In comparison, Sigma flashes require one button for rotation and another one for tilt, while Pentax flashes require a button press to move the head below 0°). The absence of buttons increases the usability of the head. When the head is tilted at -7° and then rotated, it slides up smoothly back to zero. 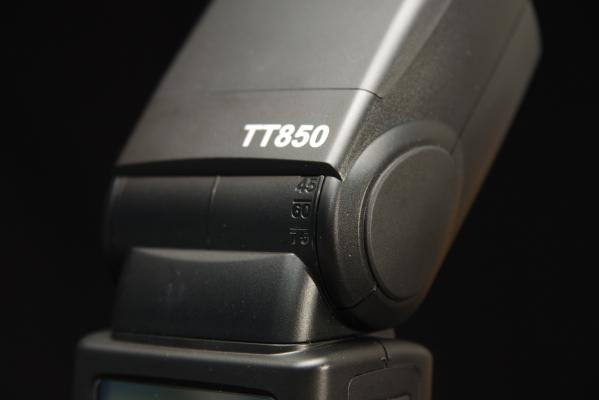 The flash head includes a wide panel diffuser and a catchlight white card. The card feels flimsier than what is found, for instance, on the Pentax AF540, but by no means cheap in and of itself. 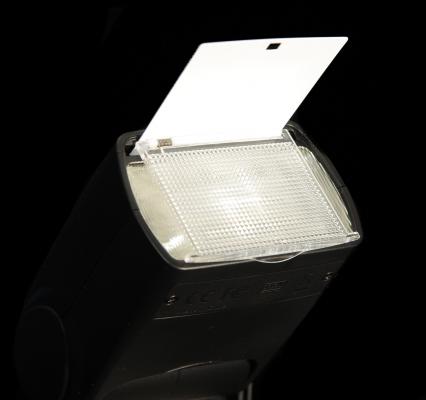 The front of the flash is dominated by the ubiquitous red window hiding the slave mode sensor and the focus spotbeam.

The back of the flash shows a large, easy-to-read LCD. On the left of the screen are displayed the various shooting modes (manual, slave, multi-exposure). The center shows the power level, zoom position, and special controls (settings for multi-exposure, delays for the sleep modes and focus assist light, for instance). The right side shows the battery status, the beep icon, sleep symbol, and displays the eventual overheat warning.

Adjusting settings is simple and straightforward. Most users will be able to adjust the flash without reading the manual. The power button is a lever, easier to use than what is found, for instance, on Yongnuo speedlights. The flash is ready to shoot in under two seconds, much faster than your typical AA-powered flash head. The red ready button doubles as a test button. In idle mode, rotating the round dial changes the power level. It is not necessary to press SET to confirm the changes.

The MODE button cycles between manual, slave (1 and 2) and multi (labelled RPT for repeat). Pressing the ZOOM button makes the zoom value blink; rotating the dial then adjusts the zoom. Values don’t cycle as with most flashes, but go up and down when you rotate in one direction or the other. You can press SET to confirm, or wait a few seconds. Holding down the ZOOM/Fn button lets you adjust the sleep delay (3, 10, 30, 60 minutes or off). Waiting brings you back to idle, while pressing SET switches to focus assist lamp duration (10, 20, 30 seconds).

MF lights up the focus assist beam. Holding this button will let you enter high-speed sync with Canon cameras. 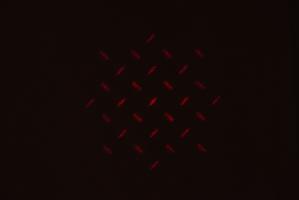 The focus assist light is a laser holographic pattern of red light. It is very effective at helping the phase detection autofocus of the K-3. Even when the beam illuminated a pattern a few dozen meters away, at night, the camera locked focus almost as if it was daylight. This is the main advantage of using a laser beam to assist your AF system. On the other hand, even with low intensity lasers such as this one, there is always a minimal risk of eye damage, so proceed with caution.

The lower left button lights up the screen with a soft blue light when pressed. Those familiar with the Pentax AF500 FTZ will recognize the look. It is worth noting that the buttons are also illuminated, a first in my experience. Holding down this button turns on the beep (when the flash is ready or when changes are made via the transmitter).

On one side is the battery door. This door is one of the best I have seen, and puts the Pentax AF540’s door to shame. It slides down then springs up at a right angle. A small lever releases the battery. To close the door, press it down and slide it back up. This door shows a nice side-effect of using a li-ion battery : because AAs connect with springs, they push against their battery door at all times, while a single li-ion cell is held in place and puts no stress on the door, letting it operate more smoothly. What’s more, even if the door is damaged or removed, the flash will still operate properly!

The left side shows a rubber cover with two connections underneath. The first one is the (somewhat) standard 2.5mm jack, allowing simple triggering of the flash. The second one is proprietary, made to host the RF-16s receiver. The cover rotates out of the way easily. While rubber covers are always a potential weak spot, I do not feel that this one is less reliable than any other I have seen in the past. 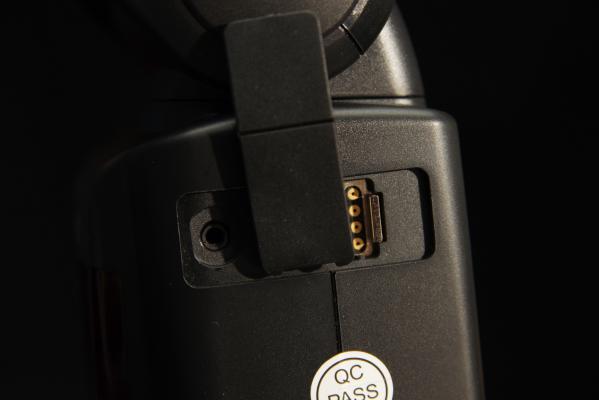 The receiver attaches to the flash by simply pressing its spring-loaded pins into the hole, and it’s done! The flash can now receive commands from the transmitter. 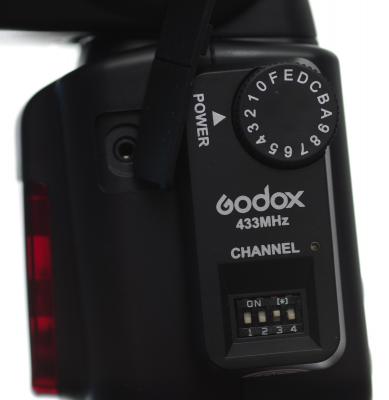 The hotshoe is made of metal, which should please most users. It locks in place by using a ring. While I prefer a lever, this ring is large and easy to rotate. 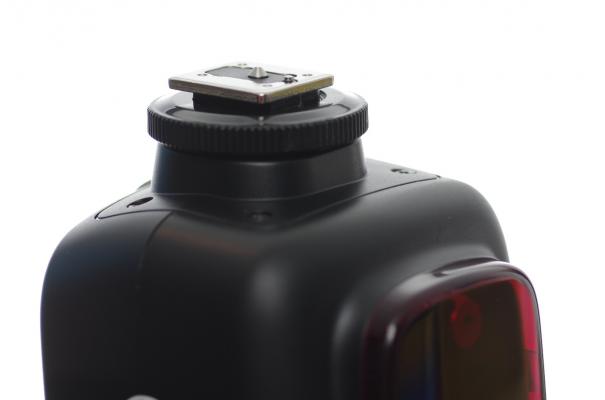 The flash’s charger is your typical, corded affair. It is well-made, and even shows charge levels (0-20-50-80-100%), which is more than what most chargers do. The battery is inserted vertically, which means you can stack several chargers if space is an issue. 2.5 hours will fully charge a depleted battery. The charger can also give a warning if something ever gets wrong with your battery. Lastly, it can accommodate an optional car plug. 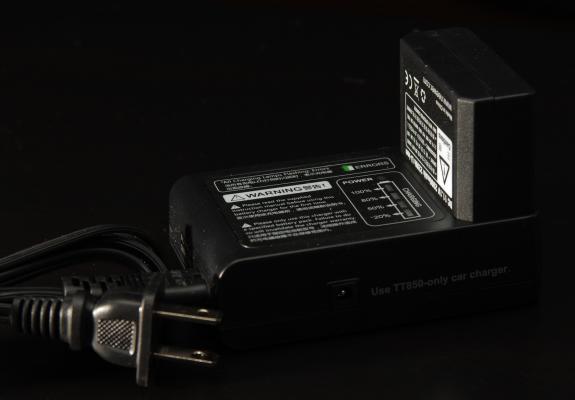 In summary, I am more than pleased with the quality and design of the flash. It is well made, easy to use, and should last a long time. While it lacks any kind of port for a battery pack, it does not need it, as you will see in the following pages. 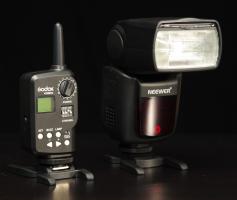