There is a small gap between the edge of the zoom ring (green ring in the photo below) and the tip of the lens barrel that extends; this is not a defect but rather a clever design choice to prevent your fingers from accidentally getting clamped after zooming out. 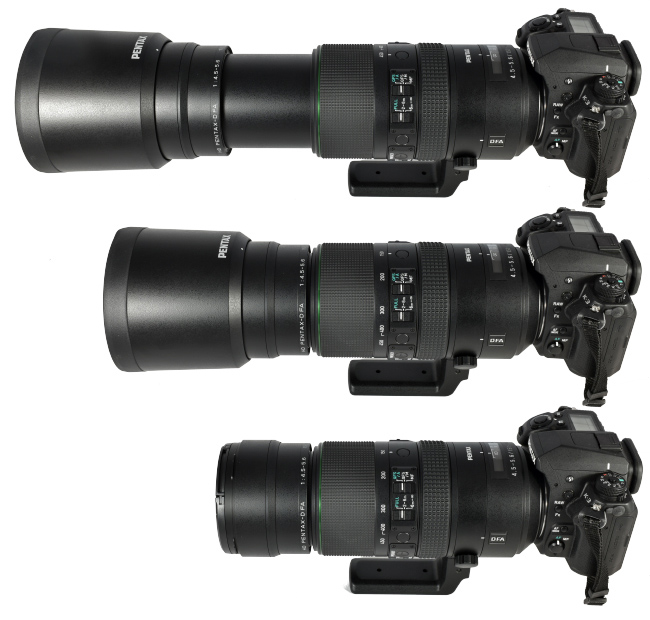 The zoom ring is stiff and requires a considerable amount of force to be turned.   Due to the friction, zooming with only your fingertips is difficult.  As a result, most of the time you will be using your entire hand to zoom.  This not only causes discomfort and compromises your grasp of the lens, but it also places a considerable amount of strain on the lens mount (if you are hand-holding the camera by its grip).

The lens is somewhat heavier toward the rear at 150mm and shifts to being front-heavy at 450mm.  Due to the layout and length of the barrel, it does not always balance well or rest comfortably in your hands. We recommend turning the tripod foot stub to 3 o'clock when shooting hand-held to be able to utilize as much of the surface area as possible for support.  Had the lens offered more empty space between its two rings, at least underneath, it may have been much easier to hold.  Placement of its switches near the "DFA" badge could have made this possible.

We compared the 150-450mm to the Nikon 80-400mm in terms of handling.  In general, the competing lens pulls ahead in this area as it is over 600g lighter and has a shorter zoom extension with considerably less friction.  This makes a world of a difference when not shooting on a tripod, but it comes at the expense of build quality: the Nikon lens has a cheaper feel due to a plastic outer barrel.  Its focusing window is also a bit small.

Both lenses have roughly the same diameter throughout.  Relatively speaking, the 150-450mm only widens at the front.

Having performed this comparison, we cannot recommend the Pentax 150-450mm for hand-holding; lighter lenses such as the DA* 60-250mm F4 handle much better, as do long Sigma zooms like the 150-500mm. The 150-450mm gets by handling-wise only when you don't operate the zoom or focusing rings frequently.

Fortunately, everything changes once the 150-450mm lens is a placed on a tripod.  When the weight of the lens isn't slowing you down and straining your wrists, you can fully enjoy the fact that it is a zoom and focus on what's most important: capturing the shot exactly as you'd like it.  The convenience of zooming can be indispensable in many scenarios, especially if your subjects can rapidly move toward or away from the camera.

At the end of the day, even though the 150-450mm can be cumbersome in the field without a tripod, one needs to factor in its superb image quality before opting against it. If you find a tripod to be too inconvenient, a monopod certainly also improves handling.