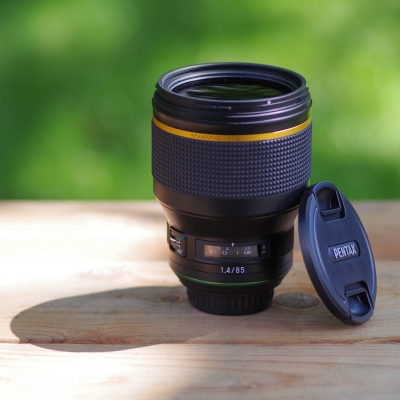 There is no avoiding the fact that this is a large and heavy lens. Apart from lenses in the tele range (200mm and more), there is probably no bigger prime currently available for the K-mount.

Built according to the quality standards associated with the STAR line, this lens is solid and rugged, assembled with extremely tight tolerances, using high-quality materials. It does not look like a fragile jewel, but a reliable tool able to withstand a lot of abuse.

The 85mm uses the most recent iteration of the K-mount. As such, it won't be compatible with older camera bodies. The focal length falls directly in the range associated with portraiture but can also serve as a short tele.

The 85mm's optical capabilities are where it really shines. Center sharpness, in particular, is above expectations at all apertures, even wide open. Bokeh ranks among the best, and preserves its qualities even when the aperture closes. Distortion is almost absent, requiring no corrections. Flare is well controlled, with rare and discreet occurrences. Images have superb color rendering, in line with other Pentax lenses, and fine tonal reproduction. The lens is even able to produce pleasing starbursts. Regardless that this is a STAR lens, the 85mm goes beyond what users would probably expect.

Focusing is as good as it gets, with focus speeds almost too fast to measure in medium to good light. AF accuracy is high, even in very low light.

Everything is not perfect of course. Sharpness in the edges and corners is good, but nowhere near the center results. Vignetting wide open on full frame is strongly present. There is some chromatic aberration occurring at wide-to-medium apertures. Luckily both these elements are easy to correct via post-processing or even in-camera.

If one is not overwhelmed by the size (and price), the 85mm is an extremely rewarding lens with no true flaws, and long list of qualities, both technical and artistic.

Who is it For?

With its large size, rugged metal build, fast aperture, and portrait focal length, the D FA* 85mm is a lens with no compromises. While it can serve anyone wishing to dabble in portraiture or interested in a short tele, there is no avoiding the fact that the lens is meant for professionals, or amateurs willing to spend money, to get the best product available. The high cost of ownership makes it difficult to recommend it blindly; while it is certainly more than worthwhile optically, it remains expensive. Value is hard to quantify. However, to attain this level of quality, one must be willing to pay the price.

The elephant in the room is that, when comparing with the older (and cheaper) FA 77mm F1.8 Limited, the latter can hold its own in many aspects. The D FA* 85mm remains superior both regarding its optical capabilities and its autofocus, no small feat.

Setting aside the high price, the D FA* 85mm F1.4 is among the few best overall lenses in the entire K-mount lineup. This is a bold assertion, but one which can be written without hesitation. Even the large size is not as much of a problem as one would think before using the lens. We wrote it at the beginning of this page, and write it again to conclude: the D FA* 85mm F1.4 took our breath away.

Be sure to check the user reviews or post your own if you already own this lens. 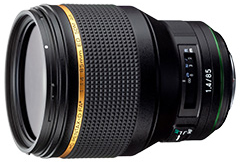