In order to cater to professional photographers, a manufacturer must meet several requirements. In addition to a full frame body, a 70-200mm F2.8 telephoto lens is very high on the list. It is thus not very surprising that Pentax released its own version of that lens just prior to the launch of the Pentax K-1 itself.

The HD Pentax-D FA* 70-200mm F2.8 ED DC AW lens was launched alongside the 15-30mm F2.8 and 24-70mm F2.8 to create a trio of fast zooms able to cover most photographer's needs. Unlike the other two lenses, which are a repackaging of a comparable Tamron lenses (otherwise unavailable for Pentax), the 70-200mm appears to be a brand new in-house design. The 70-200mm's launch was delayed after the initial announcement, to allow the engineers more time to perfect their design.

A 70-200mm lens serves many purposes, especially on full frame. It can be used for portraits (both outside and in a studio), sports, weddings, photojournalism, wildlife, concerts and shows. Such a lens also comes with high expectations. Photographers will expect a high level of optical performance, fast AF, and high reliability.

Pentax APS-C users have long had access to the DA* 50-135mm F2.8 lens, which covers approximately the same field of view as a 70-200mm on FF, and to the DA* 60-250mm F4 which has a slower aperture, but is lighter and covers a longer range. The only direct competitor to the new D FA* 70-200mm is the Tamron 70-200mm F2.8, which is an older design (a newer version was released in 2012, and is not available for Pentax) but nevertheless one that we will be examining closely. Canon, Nikon and Sony users of course have access to equivalent lenses in their respective mounts.

Pentax used almost every optical technology available to it in this 70-200mm lens. From the premium HD and Aerobright II coatings, to Super Protect on the front element, silent DC focusing, internal focusing and zooming, extra-low dispersion glass and of course weather sealing, this member of the star (*) line is intended as an advanced, professional tool with no half-measures.

In this 15-page review we will look in detail at the HD Pentax-D FA* 70-200mm, covering all its physical characteristics, features and controls, as well as fundamental aspects of its optical performance.  We also perform a direct optical and real-world comparison between the Pentax lens and the Tamron 70-200mm. How good is the D FA* lens alongside its main competitor? 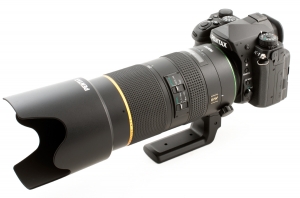