The Pentax DA-series Limited primes are very compact lenses. The 20-40mm zoom therefore surprises you a bit when you first unpack it.  Although still very light, Pentax's new zoom comparatively larger: it is no longer dwarfed by the camera body in the same way that the Limited primes are. The images below compares it to the standard 18-55mm kit lens (click to enlarge): 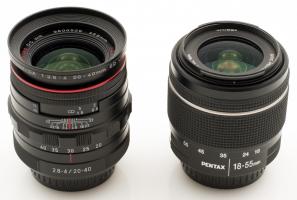 The key thing to note is that the 20-40mm has a wider diameter than the 18-55mm as well as the other Limiteds.  Also, the DA 20-40mm zoom has a filter diameter of 55mm, which is a first for Pentax. If you want to use a filter you first unscrew the lens hood, mount the filer and then screw the hood back in.  There are no threads in the hood itself.

While the lens is large for a DA Limited it doesn't extend much when zooming or focusing. Focus throw is about 60 degrees. The lens is at its shortest at 30mm:

The outer as well as the inner barrel and lens hood are all made of metal. There is no wobbling or looseness anywhere; the lens feels solid and it has a confidence-inspiring design.  On top of the lens there is a window with a distance scale as well as a classic depth of field scale, which isn't the most helpful given the short focusing throw. 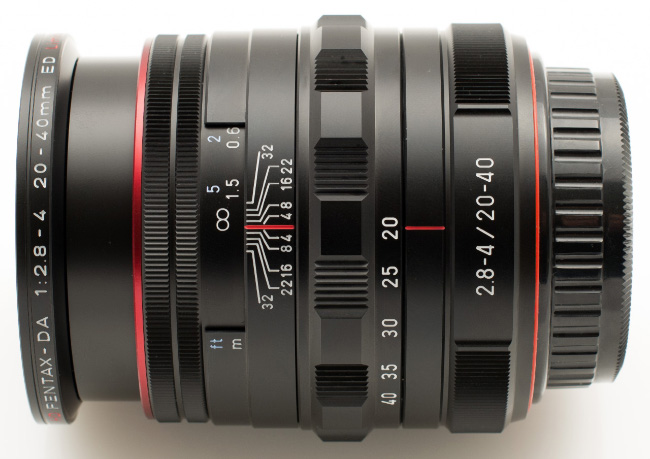 The Takumar-style design of the zoom ring looks foreign at first for a Limited lens, but is actually very convenient in the field as you can easily locate and operate the zoom ring by feel alone.

The lens cap is also made of metal and is lined with felt inside. 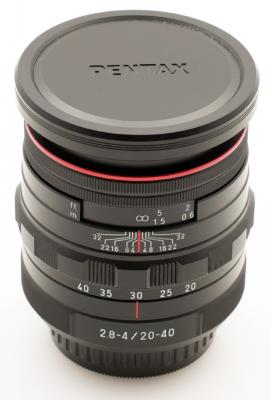 The back of the lens has a simple design, with no labeling or controls.  The length of the lens complements the size of your hand very well so it is easy to hold. 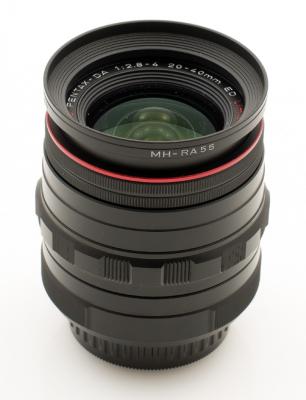 Unlike all other Limited series lenses, this new zoom not only has a built-in focus motor but it is also weather sealed.  There is a red rubber gasket around the lens mount as well as numerous seals inside the lens itself.  On top of this, the front element has been treated with the Pentax Super Protect coating to repel dust and to make it easy to wipe clean when wet. 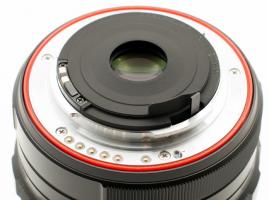 The rear of the lens is a matte black and the exit opening is made as small as possible. This helps to reduce/eliminate flare from light reflected from the sensor back out towards the lens. The KAF3 mount has no provision for traditional screwdrive AF, so owners of Pentax K100D/K110D and older cameras must resort to manual focus.

The HD Pentax-DA 20-40mm F2.8-4 has a very nice metal build quality.  The lens balances well on the camera and it is easy to hold.  One of its best aspects in terms of handling is that the zoom ring is easy to locate by feel alone. Add to that the weather sealing and a built-in focus motor; this lens leaves major nothing to be desired handling-wise.

We would have liked to see a larger and more effective lens hood, however, preferably one that's petal-shaped. Our tests later will show to which extent the diminutive lens hood takes away from the image quality.  The appeal of the Zeiss-style "2.8-4 / 20-40" labeling in lieu of the more traditional "Pentax 20-40mm" is also debatable.

Ready to get your HD Pentax-DA 20-40mm F2.8-4 Limited? Click below to place an order or check current pricing.