The HD Pentax-DA 20-40mm F2.8-4 DC WR Limited is the first zoom lens to join Pentax's lineup of high-quality, compact premium lenses known as the Limited series.  In the Pentax world, the "Limited" designation refers to an all-metal construction and optical designs that prioritize image quality and small size over speed.  The term is a misnomer, as it does does not imply a short or limited production run; this can be confusing for users new to Pentax cameras.  The Pentax Limited lens series is unique, as no other camera manufacture currently offers a lineup of ultra-compact, all-metal DSLR lenses.

The 20-40mm zoom was a long-awaited by the Pentax user community, as it made its first appearance on the Pentax lens roadmap well over a year ago.  Our expectations of this lens are high, as the existing Limited primes have enjoyed great popularity and are among the highest-rated lenses currently available for Pentax.  We also expect the performance of this lens to justify its $999 price tag.

Designed exclusively for Pentax APS-C DSLRs, the 20-40mm is meant to be used primarily as a walkaround lens, since it covers a focal length range starting at a wide-angle field of view (20mm) and ending at a long "normal" field of view (40mm).  This makes it well-suited for a variety of everyday shooting styles and means that it should be considered as a replacement for the 18-55mm kit lens or other walkaround zooms. The 20-40mm's zoom range happens to overlap with three of the five Limited primes: the 21mm F3.2, 35mm F2.8, and 40mm F2.8, so some users might consider getting it in lieu of some or all of that trio. 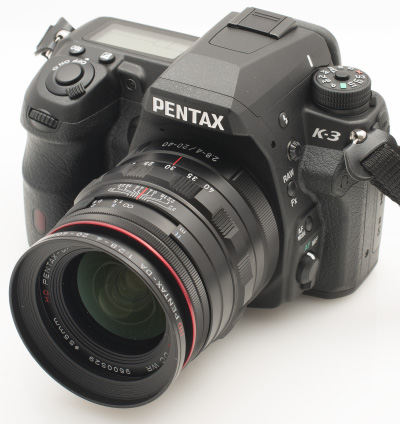 The 20-40mm is packed with the latest Pentax lens technologies, including the HD coating for its optical elements.  This new coating was launched to improve ghosting and flare performance over the traditional SMC coating, and it has certainly lived up to expectations on the other Limited lenses.

Even though it is designed to be a compact lens, Pentax have been able to fit the 20-40mm not only with silent DC autofocus, but also weather sealing to repel water and moisture when shooting outdoors.  This means that the 20-40mm lens will compete with the DA* 16-50mm, DA 16-85mm, and the 18-55mm WR weather-sealed zooms. 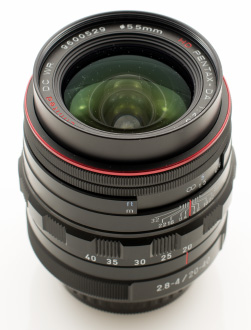 Metal lens barrels are certainly a rarity these days, as are optical designs that prioritize compactness over speed. This type of construction is what makes the 20-40mm so unique.  This lens is also the first Limited to receive silent autofocus (a much-needed alternative to the noisy screwdrive mechanism) as well as weather sealing.

On the other hand, this lens offers a narrower zoom range than both the 18-55mm and 16-50mm, and at the long end, it's considerably slower than walkaround primes like the 35mm F2.4 or 50mm F1.8.  But does the premium image quality and high build quality make up for this?  Read on to find out!

Ready to get your HD Pentax-DA 20-40mm F2.8-4 Limited? Click below to place an order or check current pricing.