At Photokina 2012, Pentax announced a brand new lens coating which they named the "HD Coating".  This coating is slowly starting to replace the conventional "Super Multi Coating" (SMC) on high-end Pentax glass.  According to Pentax, the new HD coating greatly reduces reflectance without making any sacrifices in terms of durability.  This kind of coating isn't new to the industry, however: Pentax digital medium format lenses have been treated with a slightly less durable variant called Aero Bright coating ever since their debut, and other manufacturers have been using "nano" coatings on their premium lenses for several years.

In this review, we will be taking a look at the five new "HD Limited" primes Pentax announced in August, 2013: the HD Pentax-DA 15mm F4, HD Pentax-DA 21mm F3.2, HD Pentax-DA 35mm F2.8 Macro, HD Pentax-DA 40mm F2.8, and HD Pentax-DA 70mm F2.4 Limited.  These are among the latest lenses to be treated with the HD coating.  In the Pentax world, the term "Limited" simply refers to the fact that these are compact pancake-style lenses sporting an all-metal build and top-shelf image quality.  The term does not imply a short or limited production run.

You might wonder why we're evaluating 5 lenses in a single review. The answer is simple: none of these lenses employ new optical designs; they are simply updated versions of 5 corresponding "SMC Limited" primes. The key difference between the HD and SMC Limited series is the type of lens coating used, the aperture blades, and the barrel lettering.  In this review, we will be focusing only on the differences between the HD Limiteds and the SMC Limiteds.  Specifically, we will be looking at construction/design, aberrations, flare/ghosting, contrast, and bokeh.  For remarks on sharpness, vignetting, handling, recommended uses and general performance, refer to our existing reviews of the SMC Limiteds:

Before we move on, we'd like to mention that lenses like these are unique to Pentax.  An all-metal build quality isn't something you come across often in autofocus lenses, nor are optical designs that prioritize compactness over speed.  You will be surprised how much performance you get from these tiny lenses!  Now, without further ado, let's go ahead and take a look at how the new Pentax HD Limiteds fare. 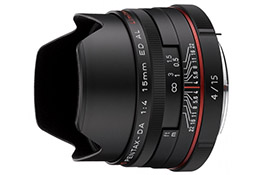