The old and new kit lenses might seem similar on paper, but they look quite different! On this page we will take you on a guided tour of the two lenses. We will look at the lenses from every angle up close, so you can know beforehand what to expect if you decide to add either one to your bag. Please note that, since the HD and DA L versions of the retractable lens are very similar, we will present only one of them here. The previous page emphasizes the difference between them.

The lenses look very much alike when viewed up front. Both show their name and pedigree around the front lens element. With the new version, Pentax replaced the blue WR lettering with plain white. 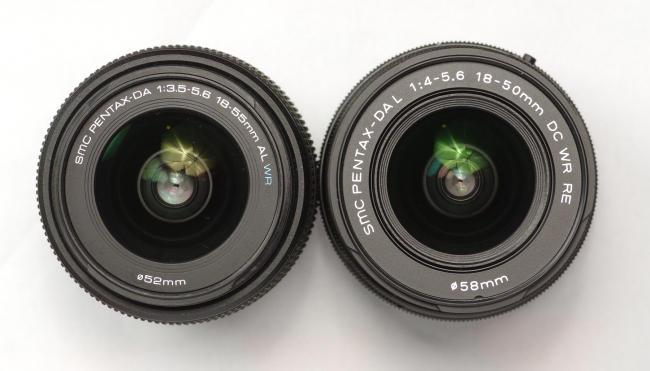 The older version uses 52mm filters, while the new one increases this diameter to 58mm. The front element is covered with the SP (Super Protect) coating in both cases. In our experience, this coating does an excellent job to protect the glass and repel grease and other contaminants. The caps are the regular Pentax pinch-type.

Both front elements are almost flush with the surface.

Here is where the lenses differ the most.  See the animation below to see how both lenses extend during focusing and zooming: 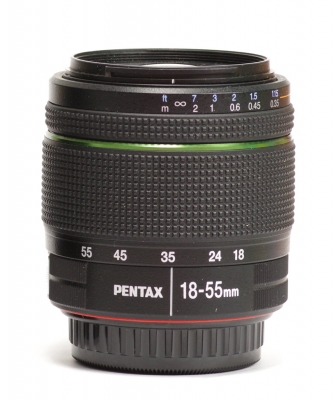 The lens body is all plastic, making the lens very light. Its finish perfectly matches that of most camera bodies. The center is occupied by the textured zoom ring, which is easy to find and manipulate even with an eye on the viewfinder. The lower part of the barrel shows the lens' zoom range, along with a line indicating the current focal length (and gives a key to align the lens when mounting it on the body). The top part, just above the green ring, sports the narrow focus ring featuring the same texture. Two scales, in meter and feet, are printed on the focus ring, which rotates when focusing. An orange mark indicates the "close focusing" range.

The focus throw is short, at about 90°. the lens features external focusing, but the variation in length is, at most, a few millimeters. The ring's action is lifeless, providing almost no feedback. Quick-shift is available at all times (this is not true for the DA L versions of the lens).

The lens is at its shortest at the 35mm mark, and extends by a maximum of 7mm when zooming in or out.

The sides are devoid of any markings except the the "Pentax DA" plate on the left (when seen from above). The back of the lens shows the CE certification and country of assembly at the bottom. 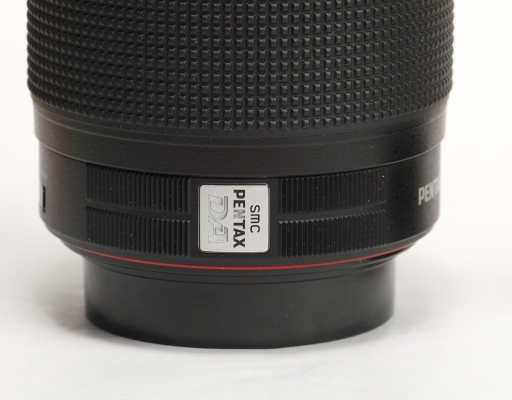 The design is elegant and functional. Considering that this is essentially a $100 lens (when purchased in a kit), the build quality is, in fact, surprisingly good. There is some wobble but, thanks to the short length of the inner barrel, it's not a problem. The finish is scratch-resistant and the rings operate well. Despite the light weight, the lens does not feel cheap.

The new retractable design is something else entirely...

When collapsed, the lens bears a vague similarity to Pentax primes, a feeling emphasized by the minimalist lettering reminiscent of the new HD Limiteds. It is indeed just as small, being the same length as the 15mm limited. The lens does not showcase the name "Pentax" on the front, but only the focal length and aperture ranges. When collapsed, it feels solid and modern. When the camera is turned on with the lens collapsed, it will show a blurred, unusable image. The K-S2, K-3 with firmware upgrade 1.20 and K-S1 with firmware upgrade 1.10 will display a message stating that it cannot be used while retracted.

In order to extend the lens and actually use it, one needs to press the button on the left and rotate the zoom ring. It clicks audibly once it reaches the usable range. The rotation is stiff, but is easier to perform with the lens mounted on a camera body. We observed a difference in stiffness between the DA L and HD versions that we tested. When extended, the whole lens comes to almost exactly the same length as the 18-55mm (a tad longer). Two inner barrels and the rather large front element are then visible. There is some wobble, caused in part by the presence of the two inner barrels. The wobble is more visible, but not really worse than on the 18-55mm. 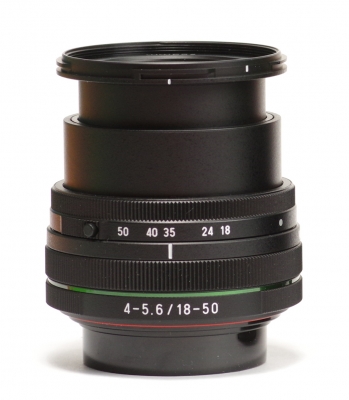 The lens body is much more minimalist than the 18-55mm. There are no markings on the two inner barrels, and the only numbers on the lower part are the focal lengths and the lens name. There are no focus distance scales or other indications.

Just like with the 18-135mm and 16-85mm, the focus ring is positioned near the camera body, above the green ring (which is also present on the HD version, the first HD lens not to feature the red ring). The zoom ring is thus positioned nearer to the front. Its narrow width makes it much harder to find blindly, and its operation is not as smooth as we would like. Both rings are much narrower than on the 18-55mm.

The focus ring rotates freely. The operation of the ring is a novelty for Pentax users, as it is the first lens to feature a focus-by-wire system. This will discussed in more detail in the Focusing section.

The focus ring rotates approximately 45° to cover the whole range, about half the throw of the 18-55mm. The lens extends in the same fashion as the 18-55mm, getting longer at both ends of the range. The feeling is smooth enough, though marginally less so than the older model.

The left side of the lens bears a very small print showing either DA or DA L depending on the version (the older lens, in line with most Pentax DA lenses, has an iridescent cast for the DA letters, mounted on a plate). The other side shows the name "Pentax". The back shows, again, the regulatory markings and country of fabrication. The markings on the lens are prints. Both our copies (DA L and HD) are identical regarding the font, size, finish and quality of the print.

The retractable design means that, when extended, the lens' inner barrels are actually longer than the sturdier outer barrel, which is rather unusual. In addition to limiting the total surface available to handle the lens, it could make the assembly more fragile.

The HD version we received for testing had, from the beginning, more friction on the zoom barrel than the DA L version. This was never a problem while handling the lens, but near the end of our testing period, an internal component either got displaced or damaged. The result is that our sample cannot be retracted anymore, and that AF at focal lengths wider than 35mm is now inaccurate. Since the friction was stronger to begin with, we hypothesize that the first damage occurred either during fabrication or transportation.

We have seen no other reports of such problems anywhere on our forums, and our DA L sample performs as expected. We thus do not expect this problem to be common, but it is still worth mentioning that care should be taken when manipulating this lens.  We consider the DA 18-55mm to be a more robust lens from a physical standpoint.

The lenses do not offer an aperture ring. The 18-50mm features 7 blades, rounded to deliver a more pleasing bokeh. The older 18-55mm has 6 straight aperture blades. As can be seen from the pictures above, the aperture of the 18-50mm is not perfectly circular when fully closed down, but is still rounder than the 18-55mm. Its effect will be evaluated in the Bokeh section of this review. 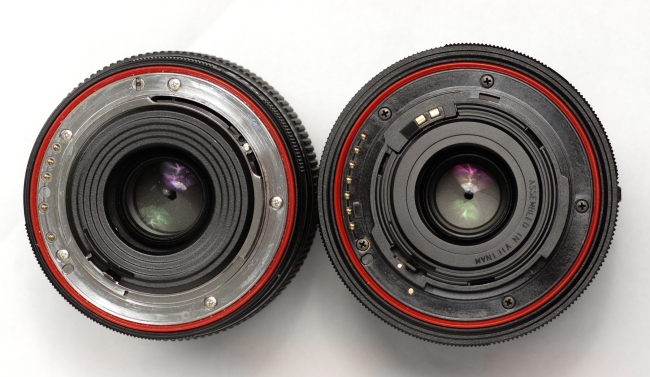 The new version has a plastic mount, for both the DA L and HD versions. In the past, plastic mounts were used only on DA L lenses. While metal is often perceived as higher quality than plastic, we do not feel that the plastic mount decreases the quality of the lens in this case. The older lens has an all-metal lens mount (DA L versions of the 18-55mm are plastic, however). Both show the red o-ring which couples to a WR body to prevent water ingress.

The 18-55mm is screw-drive, and lacks the contacts for SDM or DC motors. On the other end, the 18-50mm only has contacts for the DC motor and lacks any kind of screw-drive. This combined with the focus-by-wire implementation in the 18-50mm means that cameras older than the K10D (2006) will not be usable with this lens, since even manual focusing won't be possible.

The following illustrations show the seals that Pentax included in the lenses to ensure protection against the elements.

The older 18-55mm WR ships with a regular petal-shaped Pentax hood. The inside is textured to limit reflections, and the hood shows the usual window cut-out to use polarizing filters. The hood of course reverses for storing.

The newer 18-50mm ships with a hood only with the HD version. That hood differs strongly from the usual. It is a flat plastic disk with a rectangular cutout in the center (similar to the hood on the 21mm Limited). This means the hood is much thinner and can be left in place at all times. Filters cannot be used with the hood in place, however.

The images below show how the 18-50mm looks when mounted on a Pentax cameras.

Comparison with Other Lenses

Here are a few images of the 18-50mm next to other Pentax lenses, for reference.

Seven years have passed between the genesis of the two lenses we are looking at. While we are sure to find differences in autofocus and image quality, the construction of the lenses are enough to set them firmly apart.

Both lenses are well-made, especially considering their price points. They are both light and compact, if not very tightly assembled. There is no premium feel on either lens, but no feeling of corners being cut either. The older 18-55mm design is straightforward, with a large zoom ring. The newer 18-50mm is extremely thin, with rings that are harder to operate because of their limited thickness and stiffer friction. Its handling is, in general, not as comfortable as a regular lens.

It boils down to comparing a lens with a standard, utilitarian design with one with a extremely compact, but more awkward style. The retracted size of the 18-50mm is certainly more than a novelty, and is perfectly in line with Pentax's philosophy of compact lenses and cameras.