A lot has changed in seven years regarding autofocus on DSLR lenses. At the time, the bulk of the Pentax lineup was still made of lenses using the screw-drive autofocus system first seen on the F line of lenses. Today, lens-driven autofocus is being used on almost all of the new lens designs released by the company.

Pentax has long claimed that screw-drive AF was just as fast as lens-driven AF. The company’s AF system was never regarded as the fastest in the industry, although when combined with the latest DSLRs it is certainly class-leading in terms of accuracy. With screw-drive lenses, the camera couples with the lens and provides torque to move the focus system. The system is reasonably noisy, and its speed is driven mainly by the weight of the optical elements inside the lens, as well as the motor’s strength.  The Pentax K-3 and newer bodies have more powerful motors that can deliver screwdrive focusing that is up to 50% faster.

SDM (Supersonic Drive Motors, sometimes called Silent Drive motor) was released with claims of “smoother and quieter focus”. The first lenses with this system (which uses a micro-motor inside the lens) didn’t show significant improvements in AF speed, but was noticeably quieter. SDM has suffered from more than its share of faults in the past. Pentax claims to have solved this problem several years ago, and further improved the system by introducing the DC (Direct Current) AF drive in recent years. So far DC has been regarded as more reliable than SDM, as we have not observed any widespread reports of DC failure.  Several DC lenses rear-mounted focusing rings optimized for faster focusing.

This section will compare the auto and manual focus features of the two kit lenses under review.

The older AF system of the 18-55mm generates a moderate amount of high-pitched noise, which can be annoying when the lens rakes through all its focus range, but won't be disturbing for fine-tuning between shots. Luckily the AF throw is short and moving from closest focus to infinity does not take much time. Using the viewfinder (in phase detection AF, or PDAF) the 18-55mm seems responsive and surprisingly fast for such an inexpensive lens. The focus ring turns when the AF system is active. It features a distance scale.

The DC motor of the 18-50mm feels like a much more modern system (which it is). It is indeed almost silent, and moves quickly and decisively towards an accurate AF lock. In terms of perception alone, it was a much-needed improvement that is likely to leave a better first impression for new users. The focus ring is devoid of any markings and does not turn when AF is active. The total lens length does not change when focusing, however the front glass element will move inside the barrel at certain focusing distances.

Both lenses are shorter at infinity, gaining a few millimeters when moving to closer focus distances. The front elements do not rotate when AF is active, making it easier to use polarizers.

Live View AF (using contrast detection, or CDAF) is one area where the newer DC motor really shines. While the 18-55mm is both slow and hesitant using live view, the 18-50mm feels just as fast and decisive as it does when using regular, viewfinder-based AF. The same is true for many lenses using screw-drive, a system designed before live view was invented. Here the improvement results in a clear victory for the retractable lens.

The 18-55mm’s focus ring is located at the front, the most common position for FA and DA lenses. Its throw covers about 90°. The ring feels lifeless, with little dampening and feedback. With DA versions, quick-shift is available at all times to override the AF system. DA L versions do not offer quick-shift.

The 18-50mm is the first Pentax lens to offer focus-by-wire. The small size and retractable design likely made this change mandatory. Focus-by-wire means that the focus ring is not mechanically coupled to the focus system. Instead, when the ring is rotated, it sends an electronic signal to the lens which then moves the AF engine according to the detected movement. This has four impacts:

The focus throw is about half that of the 18-55mm, at 45°. The ring doesn’t meet a hard stop, but rotates freely without any change in friction. It means it is difficult to know when the end of the focus range has been reached. One perk of the focus-by-wire is that it allows quick-shift for both the HD and DA L versions of the lens, a first for a DA L lens. Still, the 18-50mm clearly does not feel like a lens designed for manual focus.

The DC motor will often make fine adjustments to the focus as you zoom in and out with the 18-50mm.  This generates a very faint clicking sound that is perfectly normal.  Note that this does not make the 18-50mm a parfocal lens; you will still have to re-focus after zooming in.

We tested the AF speed with a Pentax K-3, using both Live View and the standard PDAF (phase detection AF, through the viewfinder). We tested AF at 35mm, using as a subject a black line on a while background, about 1 m in front of the camera. We used the central focus point. The lenses were set at infinity before each test, and three measurements were averaged for each data point. Measurements were performed by recording the AF noise confirmation, at various levels of ambient light. 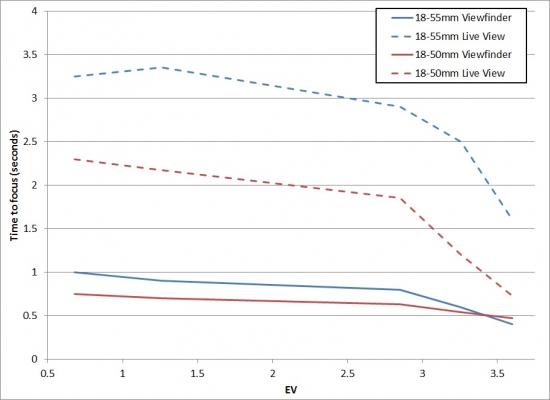 This chart shows that Pentax has made visible improvements to the AF speed with the newer model. The changes are present but minimal when using the viewfinder; the older 18-55mm was pretty good to begin with. However, the improvements are dramatic when using Live View. The new 18-50 is about 1 second faster to focus in low to moderate light.

It is obvious that the camera and lens combo start performing much better when light levels go above 3 EV. Below that, the speed increases steadily but slowly. It must be noted that below 2 EV, using Live View, both lenses struggled to reach focus, and we had to repeat the measurements several times to get any lock. When light levels get brighter than 3 EV, CDAF with the 18-50mm becomes almost as fast as PDAF, which is very impressive!

Both lenses perform well regarding autofocus. The newer 18-50mm lens outclasses the older 18-55mm both for speed and noise, especially in Live View. The silent AF will be useful in many situations, such as concerts and ceremonies for instance.

Manual focus isn't particularly exciting on either lens, but the older design is better than the newer focus-by-wire. The focusing by wire introduces a small amount of latency and is notched. AF accuracy is excellent with both lenses, except in near darkness using Live View.