Kit lenses are a ubiquitous part of DSLR photography. They often come bundled with camera bodies, and for some people they are the only lens they will ever own. Inexpensive, compact, and almost always covering similar focal lengths, they offer varying levels of performance depending on the brand. 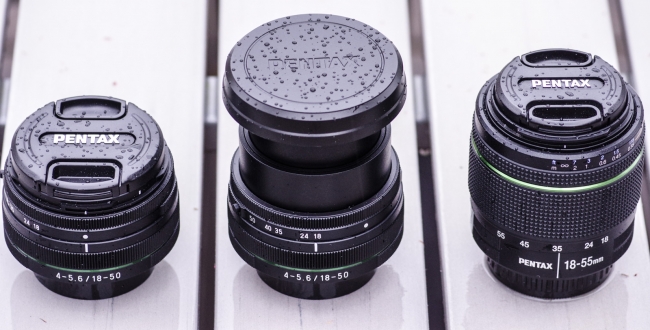 The Pentax kit lens has been through several iterations in the past few years. For a long time, Pentax offered only one version of the 18-55mm lens. In 2008, the company upgraded the kit to “version II”. A lighter DA L version with a plastic mount and no quick-shift was released simultaneously. The next year saw the release of a weather resistant (WR) version, optically identical to version II. The last on this list is the DA L WR version, released in 2013 and sold as a kit with the K-50. All of these lenses, starting with version II, share the same optical formula. The mount material, quick-shift, WR and barrel texture/finish are the only differences.  To learn more about these lens variants and their historical differences, visit our 18-55mm kit lens review.

The Pentax kit lenses are probably better than average in the photographic industry as far as optics. They are almost unique in offering weather resistance. Unfortunately, in 2015 they present one distinct flaw. The industry is moving towards silent, ultrasonic motors and the screw-drive of the 18-55mm is a legacy of the past. While reasonably fast and perfectly accurate, a screw-drive is loud and much less efficient for live view and videos.

In light of this, it was generally regarded as great news that Pentax decided to upgrade the kit lens with the launch of the K-S2 camera in 2015. The company did not simply make cosmetic changes this time, but presented a completely new design with many interesting characteristics. Covering the 18-50mm range, it comes in two flavors: the cheaper SMC Pentax-DA L 18- 50mm F4-5.6 DC WR RE, available only as a kit with the K-S2, and the higher-end HD Pentax-DA 18-50mm F4-5.6 DC WR RE, available boxed for $299 USD. The latter has the newer HD coatings for improved flare resistance. The former sports the older, but still reliable, SMC coating.

In this review we will be comparing the two new 18-50mm kit lenses to the SMC Pentax-DA 18-55mm WR. The HD 18-55mm and DA 18-55mm are at the top of their respective market segments, but 7 years separate their optical designs. The retractable lens is $100 more expensive, when purchased alone, than the 18-55mm. How will they compare? Keep reading to find out!