Vignetting is inevitable, to some extent. That is even more true with zooms.

In simple terms, vignetting is the darkening of the corners of an image that occurs at wider apertures. Every lens, at wider apertures, will exhibit some of it. Luckily, it need not be a problem for modern photographers. First, it is always possible to shoot at smaller apertures, mitigating the effect. Second, cameras released in the last few years often have built-in tools to remove vignetting automatically for JPEG files.

The kit lenses are inexpensive and, as such, it is expected that they will show some vignetting. Let's find out how they actually performed.

The test was performed by pointing the lens at a blank wall. In order to avoid the bias of the in-camera corrections, we shot each image both in JPEG and in DNG RAW, then used Lightroom to develop the RAW files (using defaults settings to develop the files). JPEGs and RAWs were scaled down, converted to grayscale for improved visibility, then exported. The following settings were used:

The following chart summarizes the findings at three focal lengths, for the RAW files. The solid lines represent the 18-55mm, and the dashes the 18-50mm. 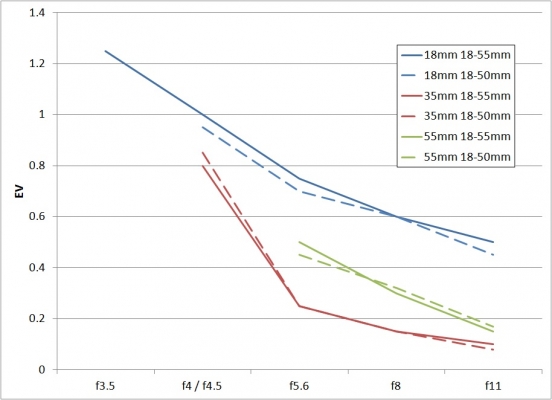 Vignetting is worse at 18mm, best at 35mm, and in-between at 55mm, which is to be expected for entry-level zooms. What is impressive is the high level of agreement between the two lenses. This suggests that, even though the optical design evolved, its foundations are the same.

The JPEG engine in-camera took care of vignetting for both lenses, making it all but disappear.

The following images illustrate the worst cases of vignetting at three focal lengths. They were cropped to be better seen side by side, with the vignetting corners in the center of the page.

As can be expected, JPEG files with in-camera correction show no visible vignetting. RAW files, allowing a more accurate evaluation of the lenses themselves, show similar vignetting performance for both lenses. Best results are obtained in the middle of the zoom range. Wider apertures show the worst performance, as expected. At 18mm, vignetting will be noticeable for apertures larger than f8. This could be a problem since wide fields of view are often used for panoramas including a portion of the sky, where corner darkening is easy to spot. At 35mm, vignetting wide open is above 1 EV and will be visible in most images, but thankfully decreases quickly when the aperture is closed. Vignetting at 55mm will be visible not but bothersome in most shooting situations.

The overall level of vignetting is more than managable. It is still one area where more expensive lenses deliver better results. We recommend to keep in-camera vignetting correction enable if you're a beginner. It will almost completely remove any vignetting and improve your images.