The LENSBABY COMPOSER is a soft focus lens with a fixed focal length. What makes it special is that you can place the area of focus, the focus "sweet spot", where you want it in the frame by tilting the lens. And you adjust the size of the area in focus by changing aperture. Changing the aperture also affects amount of blur in the area not in focus. Pentax' own (discontinued) soft focus lenses will always have the sweet spot in the center of the frame.

The package includes the lens, lens cap, 7 aperture disks, a tool for exchanging the disks (the tool also holds the disks not in use), carrying pouch, and a very brief user manual.

The lens is manual focus and comes in a simplified Pentax K mount without a stop down lever. There is no variable aperture so a stop down lever would serve no purpose. The aperture is changed by manually exchanging a black disk with a circular hole in it. This aperture disk is placed in front of the optics but is nevertheless somewhat cumbersome to exchange and the disks appear to be quite fragile. Aperture disks are included from f/2.8 to f/22 in full stops. Without a disk inserted the lens f/stop is 2. Naturally, the image in the viewfinder becomes quite dark and focusing difficult when a disk with a small aperture like f/16 or f/22 is inserted. Exposure is most conveniently done with the camera in Av mode. M mode can also be used. In this mode pressing the Green Button will set the shutter speed to match the f/stop of the lens.

The aperture controls the softness: The larger the aperture the smaller the area that will be sharp and the blurrier the out of focus area will be.

The front element sits deeply and no lens hood is required as illustrated in the photo below. The photo also shows the aperture disk, here f/4, placed in front of the optical elements.

The lens has an amply sized, ribbed focusing ring which you also grab hold of to tilt the lens. There is no focus scale and there are no scales indicating the amount and direction of tilt (the lens tilts freely in all directions). You have to evaluate the effect in the viewfinder or on the screen and adjust the tilt and aperture until you get the effect you want. The lens is very light and the lens barrel is part plastic, part metal. The lens mount is of metal.

The lens has a two element optics which can be exchanged with three other types (not included): A Plastic Optic for an ultra-soft and ethereal look, a Single Glass Optic for a vintage look, and a Pinhole/Zone Plate for softer, dreamier focus images that are equally sharp from edge to edge.

Before we go any further, let's take a look at the image effect. Thee three sample photos below were taken at f/4. In the fist sample the sweet spot was placed center, then to the left, and finally to the right.

This lens is not about image quality in the usual sense but should rather be evaluated on its ability to create special effects so we will only make few comments on the traditional parameters.

We also included a comparison of the sweet spot in the center of the Lensbaby with the center of the smc Pentax-FA 50mm F1.4 lens. The test chart shots are 100% crops of the chart and were shot with a PENTAX K-5.

The bokeh is pleasing due to the perfectly circular diaphragm. Areas well away from the sweetspot not only become blurred but distorted - circles become ovals radiating away from the canter of focus - an effect you may or may not like.

With a magnification ratio of 0.15x, this lens is no macro lens but the magnification can of course easily be increased with extension tubes.

Who is it For?

If you have a need for working creatively with soft focus and would rather avoid doing so through post-processing, this lens might be for you. At more than $250 new, however, this lens is somewhat expensive for what it is and does.

It is possible to create some fun effects with this lens. If you don't need to evaluate the effects in the field an alternative would be to use one of your existing lenses and create the effects during post-processing with Photoshop or the like.

The lens ought to have an aperture ring instead of the hard-to-use aperture disks since the aperture will have to be adjusted frequently in order to achieve the desired effects. The relatively high price of this lens could better be justified had the lens had an aperture ring and thus been easier to use.

The build quality is adequate for the occasional use this lens is intended for; the exception is the aperture disks which are somewhat fragile.

The rating cannot be compared with other lenses. The sharpness rating is only for the sweet spot and when centered. The aberrations rating disregards the distortion of the blurred area.

Ready to get your LENSBABY COMPOSER? B&H has it in stock! Also, if you currently own the lens and would like to write your own review, please visit our Third-party lens user reviews section.

Ready to get your Lensbaby Composer? Click below to place an order or check current pricing. 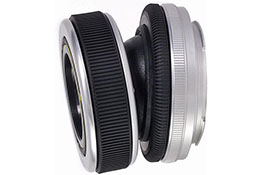