We performed two sets of image quality comparisons with the 645D and the D800E: one in the studio, and one in the field.  Let's first take a look at our studio results. 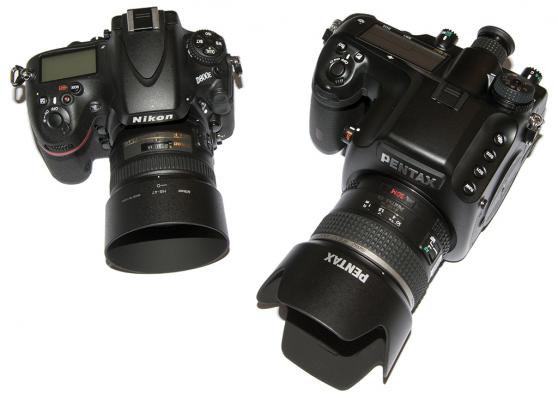 Below is a photo of our test setup, which will let you evaluate much more than our traditional test chart would: 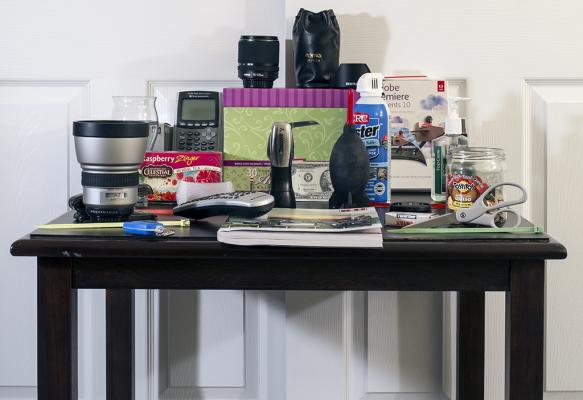 Since we could easily control the position of each camera, we preferred to use the 50mm on the D800E in order to ensure the highest possible image quality.  We also shot the scene with the 24-70mm zoom to get a set of shots from an identical distance. The test scene was photographer from a distance of approximately two meters.

We tried to control all variables to the best of our ability.  Both cameras were set to record in RAW+, and M mode was used to ensure that the exposure would remain constant from shot to shot.  We set the 645D to F16 and the Nikon to F11 (in retrospect, F13 would have been a better choice, as this would give the Nikon nearly the same DOF as that Pentax- however, this did not influence the test results in any significant way as long as you disregard the corners in the Nikon photos).  All standard ISOs were tested in 1-stop increments, from 100 to 1600 on the 645D, and 100 to 6400 on the Nikon.  We did not formally test the Nikon's Lo (50) or Hi (12800-25,600) sensitivity settings, though informally, the expanded ISO settings weren't impressive.  Both cameras were focused manually on the black leather lens case.  We did our best to ensure that both cameras shot the scene from an identical angle, though the perspective did end up changing ever so slightly when we positioned the D800E after completing the 645D tests.  We deliberately underexposed by about half a stop in order to push the cameras to the limits of their dynamic range.

In order to properly draw conclusions from this test, one must look at the original RAW files.  Below are links to the RAW downloads as well as the camera-generated JPEGs:

The RAW files give you a lot to work with, and at low ISOs, all noise can virtually be eliminated from photos taken by either camera (we used Adobe Camera RAW).  Thereafter, a mild unsharp mask can recover most of the detail and yield an image far superior to the out-of-camera JPEG.

Let's take a look at two areas of the test scene: the Pentax 18-135mm lens to judge dynamic range, and the two-dollar bill to judge sharpness.  Click on any photo to enlarge, and use your arrow keys to cycle through the lightbox.

All of these comparative samples were heavily processed in order for us to end up with the best possible photo from each camera.  We encourage you to use the RAW files to come up with your own comparisons!  We used photos from the Nikon 50mm, though the zoom shots would be better-suited for comparing resolution.

At low ISOs, the 645D does have a slight advantage over the D800E in terms of resolution, though once we tried scaling the photos from both cameras down to about 20 megapixels, the difference in resolution was hardly discernible.  At high ISOs, the Nikon has a clear advantage, and it also seems to have a much wider dynamic range at all ISOs.  This is surprising, considering the fact that the Pentax medium format sensor is almost twice as big physically as the Nikon full-frame sensor (age might be a major factor here).

Another interesting conclusion we can make is the 24-70mm zoom is surprisingly sharp, and if not for its slight geometric distortion, it would be just about as good as a prime.  It's certainly a lens worthy of being used for this comparison!

The bottom line is that the 645D doesn't have the same image quality advantage over the D800E as it did over the D3x.  In fact, the D800E even delivers better image quality at higher ISOs, thanks to its great dynamic range.  This, unfortunately, is bad news for the Pentax, which as a result scores lower in our overall image quality rating.