To put it simply, the Everyday Sling is a pleasure to use. The level of craftsmanship is impressive, with an obvious attention to details. A lot of thinking went into designing this bag. New features and details are revealed even after a long time using it, although we have tried to point out most of them. The stitching is flawless and the bag looks very durable. It is very comfortable to carry for long periods of time, its weight (even fully loaded) being well adapted to its shape. 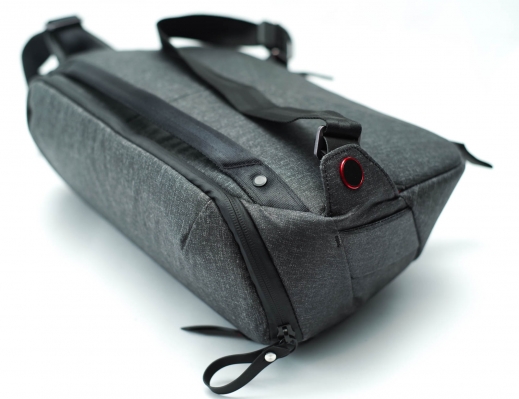 Peak Design’s sliding strap system is arguably their best innovation. The system is intuitive and easy to operate. Usually, changing the length of a strap is not frequently done during use. It requires removing the bag, fiddling with the adjustment buckles and handles, and implies a varying amount of trial and error to get the right length. Some companies like Timbuk2 found a partial solution with a clip allowing the user to set two distinct lengths for the strap. We have yet to see a system as simple and effective as the Peak Design strap. When moved to the back, the Sling can hug the user’s body closely. To move it to the front, one needs simply lengthen the strap and pull the bag in a single, one-handed movement.

The bag is rigidly build and retains its shape even when empty. The flip side is that it is not very flexible and will have a hard time bending and stretching to accommodate irregular shapes. Removing the dividers does allow the bag to compress a lot more, which can be useful to place it inside a suitcase, for instance.

The large opening grants an easier access to gear than a typical sling. It is in fact closer to a messenger in this regard. Slings often use the principle of a compartment opening in two steps, the first giving access to the camera, the second to lenses stowed below it. With the Everyday Sling, the whole compartment is accessible at all times.

Everything is not perfect with the Everyday Sling. For instance, the top flap has a tendency to close when released; it would be nice if it stayed open by itself. As mentioned earlier, the bag also cannot sit upright by itself; it tilts forward.

There is no protection beneath the bag. While the Sling isn’t likely to find itself on a hiking trail anytime soon, one should be cautious when placing the bag on a dirty or wet surface. Similarly, there is little protection for the tripod. This is fairly common, however the placement at the front means that it is somewhat likely to bump into things. 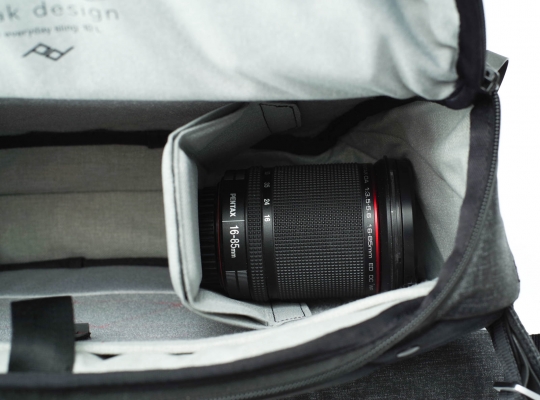 The dividers are stiff and relatively thin. While they are well suited for larger lenses, their size and shape means that smaller lenses like the Pentax Limited will probably move around inside their division.

With larger lenses, the shape and size of the dividers is ideal. This is counter-intuitive since a sling is usually meant for people traveling light. A full frame zoom lens will feel right at home inside the Sling, with the curve of the dividers and of the bag’s ends closely hugging the barrel of the lens.

The bag is surprisingly large for a sling. It is as large as some smaller messenger bags. This is both a good and a bad thing. The streamlined design means that the bag is, in fact, as compact as it can be given its internal volume. For a larger camera like the K-1, a typical sling bag is likely to be a bit small, especially with a longer zoom lens mounted. The Everyday Sling is a good choice in that case.

One last wish would be that the manufacturer had found a way to better integrate the bag with the rest of their system. This system revolves around two components: the Capture clip, which does find its place on the Sling, and the anchor links which do not. On the Everyday Messenger for instance, the company included an anchor which is intended for carrying keys but could also, in a pinch, bear one of the company’s two types of pouches (since these make use of anchor links). On the Everyday Sling, there is no anchor, and no easy way to add one.  This reduces the apparent modularity of the company’s anchor system.

These flaws are minor, and some of them should be seen more like improvement opportunities. They do not change the fact that this is an excellent product which is likely to please almost any user.

Ready to get your Peak Design Everyday Sling Bag? Click below to place an order or check current pricing. 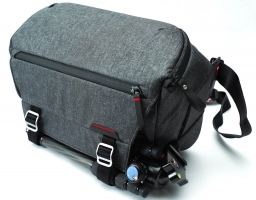