With a ultra-wide angle lens, you need to consider several image factors that are unique to the category. The image factors that we will be examining are sharpness, distortion, vignetting, flare, chromatic aberration, angle of view, and bokeh.

For sharpness testing, we used an Edmund Resolution Power Chart and field tests. A sample of the chart is seen below. The chart was originally designed to determine the maximum resolving power of an optical instrument. We’re not using the chart as it was originally intended, which was to distinguish the last group of visual lines that can be separated. The purpose of the chart is to compare one lens to another. The chart allows the viewer an apple to apple comparison of different lenses using a standard measurement. 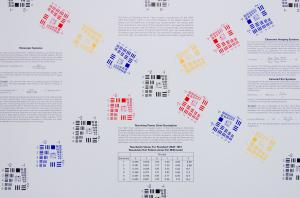 The samples above are cropped views of the center section

For the field sharpness testing a typical architectural setting was selected that offered a variety of elements. The camera was placed on a tripod to minimize changing either the camera location or settings.

The results of the Edmund Resolution Power Chart were very interesting. Initially, the Sigma DG 12-24 f/4.5-5.6 slightly out-performed the Pentax DA 12-24mm f/4. However, once the Pentax lens was either stopped down beyond F4 or zoomed beyond 12mm it performed marginally better than the Sigma. The Tamron came in third.

The field sharpness test told a different story. The Pentax lens consistently performed better than the Sigma throughout the zoom range and regardless of f-stop. The Tamron again came in third place. 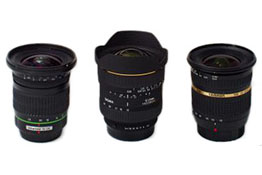