The Pentax 645D is an excellent camera, as is the Nikon D3x. So what is the bottom line and which one to chose? We believe it comes down to the type of photography that the camera will primarily be used for.

The Pentax 645D really shines when it comes to image quality. Even when down-sampled to a size matching the output from the Nikon D3x or a Pentax K-5, the images from the 645D simply look better. Noise is well-controlled and not an issue. White balance is spot-on and metering delivers good results even in scenes with high contrast. As "insurance" against blown highlights we did tend to use the convenient two step auto-bracketing (0, -0.5EV) particularly with the FA 45mm lens, which occasionally would overexpose by perhaps a half stop, however.

The camera handles well but it is preferable to use a tripod at all times due to its large size and lack shake reduction mechanism. Since there is no SR, you will quickly lose the benefit of the 40MP resolution if the camera is moved even slightly during exposure.

The camera is backwards-compatible with all Pentax 645 and 6x7 format lenses without any restrictions in functionality (6x7 lenses require an adapter). This is quite fortunate because only two new lenses have been introduced (a 25mm F4 and a 55mm F2.8) and they are in short supply (we were unable to obtain either of the new lenses for this review). Almost all of the film-era FA series of 645 lenses are available in some markets, for example in Japan. Elsewhere you must be prepared to search for majority of your lens kit on the used lens market (our Pentax Marketplace is a good starting point). It is difficult to understand why Pentax introduced a camera aimed at professionals without making a complete lens lineup readily available world wide!

Some might say that for a medium-format camera, the 645D is relatively cheap and therefore must be second rate.  This isn't the case, however.  Instead of cutting corners when it came to image quality and core design, Pentax decided to re-use many components from their K-7 (such as the LCD screen, firmware, and processor) in the 645D in order to keep costs down.

The camera's forte is the image quality. Landscape and outdoor macro photographers would benefit from the high resolution of this camera. That the camera is weather sealed is an extra bonus. The camera is well balanced with its two tripod mounts. Therefore it operates very well on a tripod - which is how the majority of landscape and macro shooters will work. The relatively slow (compared to the Nikon D3x) write speed and low burst rate are non-issues in these situations.

We also think that the camera would work well for product photos and studio work. Depending on how you work the lack of tethering could be an issue, though.

If you're into action and sports photography where fast responsiveness of the camera is the most important, the Nikon D3x would be the better choice. The image quality of the Nikon is excellent and more than adequate for such use - the extra resolution that the Pentax would provide would be overkill. The dual grip and the availability of image stabilized lenses for the Nikon makes this camera the champion for handheld shooting.

Due to the backwards compatibility with all Pentax 645 and 6x7 lenses of the film era, photographers who already own such lenses may be tempted to acquire the 645D. While the body is expensive, there would be no new investment in a set of lenses.

The Pentax 645D is a great camera as it stands today. With a few additions - first and foremost shake reduction - the camera would be a good choice in even more areas of photography than outlined above. 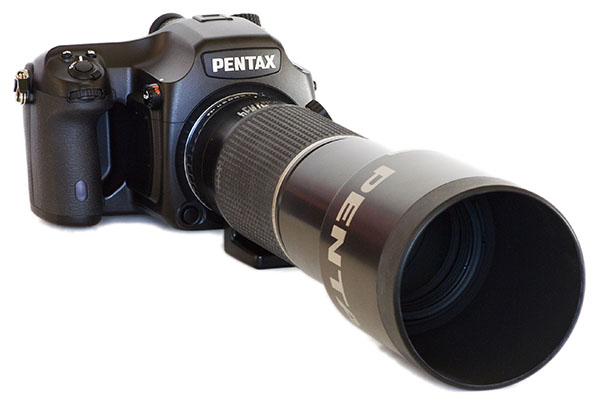 Rating the D3x and the 645D side-by-side so that a comparison is meaningful is somewhat difficult since wre looking camera in two different classes, but we will attempt it anyway. You will notice that the key difference between the two cameras lies in versatility, as the D3x will appeal to a much wider range of users.