At first look the Pentax 645D looks like a big brick. But once you get to use it, you'll notice that it has an excellent grip, feels good in the hand and can comfortably be hand-held with lenses up to 200mm. The "boxy" shape is deceiving; compared to the Nikon D3x the Pentax is about the same width but significantly shorter in height (by 40 mm (1.56")), but deeper (by 30mm (1.17")). The Pentax weighs in at 1,400g, the Nikon at 1,240g, both without batteries.

The cameras are shown below with the lenses we used for most of the tests since they have the same field of view: The smc Pentax-FA 645 45mm F2.8 and the new Nikon AF-S NIKKOR 35mm F1.4G.

The 645D feels extremely well-built with a weather sealed magnesium alloy body with a confidence-inspiring heft to it, all buttons have a nice tactile feel, and thanks to the large dimensions of the camera the controls are amply sized and easy to operate.

The 645D has two tripod mounts, one on the bottom and one on the left side. During the test we had tripod quick release plates permanently attached to both tripod mounts which made it a snap to change from horizontal to vertical shooting.

The button layout will be familiar to Pentax K-5/K-7 users, with all buttons essential for the shooting mode within reach of your left thumb or index finger, and with two control wheels. The 645D has several additional buttons so that most menu usage during shooting is virtually eliminated, we were in particular happy to see that the camera has a dedicated bracketing button (such was unfortunately dropped on the K-7 and K-5). The button layout is well thought out and easy to get used to.

The buttons are truly dedicated thus eliminating any confusion associated with their use – only two (DISP button and rear control wheel) serve more than one purpose.

The 645D has inherited the excellent feature of the K-series DSLRs of clearly marking or underlining the values that can be changed in the current shooting mode. In the view finder the values that can be changed are underlined, and on the LCD display as well as on the rear monitor they have an icon of the active control wheel next to them. This means you're never in doubt about what mode you're in and which values the control wheels can change. 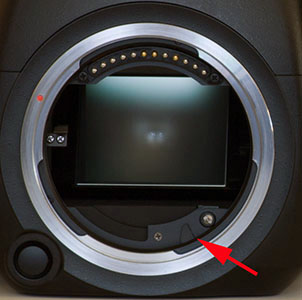 The 645D has a Pentax-645 AF2 lens mount. The mount is 100% compatible with the mount used on the 645 film cameras and it has even retained the aperture simulator lever (see image). The mount supports the new D FA lenses with built-in auto focus motors and also has the auto focus drive shaft for use with film-era FA lenses.

Since the mount is not restricted in any way over the film-era mount, you can use 6x7 lenses (with the Pentax 6x7 to 645 adapter) in Av and M mode. Metering is done with the aperture fully open just like with 645 lenses, a big plus. P-TTL flash automation is also available with 6x7 lenses. 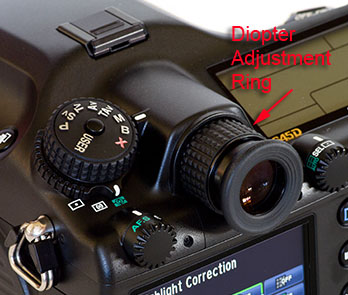 The viewfinder is big and bright and makes it easy to accurately focus a manual focus lens. The viewfinder diopter can be adjusted from -3.5 to +2. The magnification is 0.62x with a 55mm lens and the coverage is 98%. We would of course have preferred 100% coverage, especially since there is no live view as an alternative.

The focusing screen can be exchanged by the user; a total of four types are available.

The 645D shares the rechargeable D-LI90 battery with the K-7 and K-5, and it is inserted from the bottom. We took more than 550 images over three weeks during the test. This included a fair amount of chimping - only during the last few shots did the battery indicator move down from the fully charged mark. We consider battery life to be adequate for a camera of this type. Had the camera been targeted at action photography we would have preferred longer battery life or the possibility to have two batteries connected.

The capacity of the battery is 1,860 mAh. The charging time of the battery is several hours so you'd want to carry a spare fully charged. There is no provision for an accessory with a second battery (such as a grip). In a studio setting the camera can be fed from household current with the optional D-AC50 AC adapter. 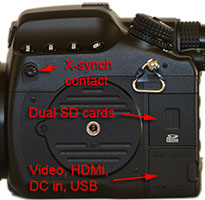 On the back there is a connector for a wired remote control. The left hand side has door behind which the two SD cards are held, and a rubber cover behind which we find the HDMI and video output, the USB connection and 9v DC in. Finally we find the X-sync flash contact on the left hand side of the mirror box. While the images can be played back on an external monitor or PC there is no tethering as such. This means the camera settings cannot be controlled from a PC. True tethering will probably be missed by some studio photographers.

As mentioned earlier we would have liked to see a 100% coverage viewfinder and provision for a second battery. Live view would have been a welcome addition as well but CCD sensors do not lend themselves to live view as they would run too hot.

We also miss shake reduction. Being used to a K-5/K-7 with its excellent in-body shake reduction makes it kind of hard to have to live without it. Although we'd normally use a tripod for landscape or studio photography there are situations in particular in the studio where you'd want to go handheld.

While the Pentax handles well, the Nikon is a notch better for handheld use thanks to the built-in grip for vertical shooting and the availability of lenses with shake reduction (VR). On a tripod the Pentax is the better-balanced and it is much easier to switch from horizontal to vertical due to its dual tripod mounts. These differences hint at which audiences there cameras are built for: The Nikon is for hand held and action photography, the Pentax for tripod-mounted landscape, macro, product, and studio photography.

Compared to the Pentax, the Nikon has a small not-that-easy-to-read top LCD supplemented by a somewhat dim LCD at the lower part of the back. The 645D has an advantage here because there's more space for its LCD and controls. The multi-way controller on the back of the D3x is flimsy - you don’t really know if you successfully pressed it or not. Other than that the Nikon is of similar confidence-inspiring build quality as the 645D, and it is also weather-sealed.

Like the Pentax, the Nikon also has dedicated buttons to for most shooting related functions. Some buttons, however, as illustrated to the right will serve two or even three functions. This can be quite confusing and we missed Pentax's way of clearly marking which values the control wheels can change.

As a plus over the Pentax, the Nikon has live view, tethering, and it lets you add a voice memo to an image through its built-in microphone.  Despite the size of the camera, Nikon didn't find room for a second battery. The Nikon EN-EL4a battery has a capacity of 1900 mAh which is comparable to the Pentax.  Thus, also for the Nikon do we recommend carrying a spare. Neither camera has built-in GPS, but both accept a GPS unit (Nikon: GP-1 GPS for $189, Pentax: O-GPS1 for $249) as an accessory.