Two new lenses have been launched for the Pentax 645D, a 25mm wide angle and a 55mm normal lens. If you need more lenses the FA series film-era lenses are available in Japan (for example through Pentax's web store) but hard to find new elsewhere. Our partner retailers in North America, Adorama and B&H, do not list these lenses, neither does Pentax's web store in the USA. In these markets you will have to scout the second hand market for Pentax 645 FA or A series lenses, or for Pentax 6x7 format lenses.  You will frequently find 645 lenses in our Marketplace.

The two new lenses are weather-sealed and have supersonic (SDM) auto focus support on the 645D. We could not test either lens due to lack of availability - unfortunately this continues to be a problem. 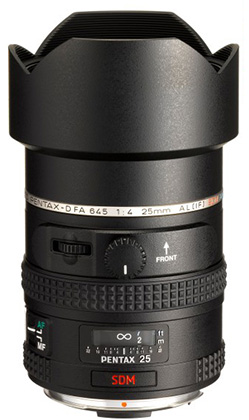 This is an exciting new wide angle lens which on the 645D roughly corresponds to a 20mm in the 24 x 36mm format, or a 13mm in the APS-C format. A unique feature of this lens: a filter holder in the middle of the lens barrel. This means you can use smaller, less expensive filters - this includes a polarizing filter which can be turned via a dial on the filter holder. The lens is weather sealed as is the 645D camera body. The lens covers the full 645 format and can be used on the Pentax 645 film cameras in manual focus mode and with restrictions in exposure modes since it has no aperture ring.  You will be able to find sample photos from the 25mm in our 645d forum section.

Further details and user reviews of the 25mm are available in the PentaxForums lens database.

The lens has not yet arrived (September 2011) at our retail partners, it is however listed at B&H Photo. 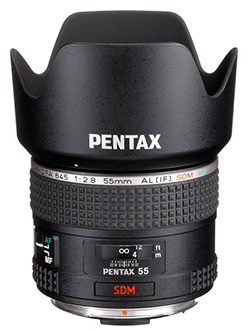 This lens is a "normal lens" on the 645D where it roughly corresponds to a 45mm in the 24 x 36mm format, or a 30mm in the APS-C format. On a 645 film camera the lens is a moderat wide angle. The lens is weather sealed as is the 645D camera body. The lens covers the full 645 format and can be used on the Pentax 645 film cameras in manual focus mode and with restrictions in exposure modes since it has no aperture ring.  This is the "kit" lens for the 645D, although it is not being bundled togather with the body in the US.

Further details and user reviews of the 55mm are also available in the PentaxForums lens database.

At the time of writing this lens is in stock at Adorama. 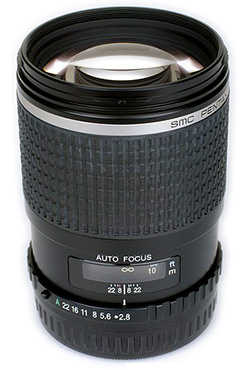 Almost all of the FA lenses are available new in some markets, for example in Japan. Elsewhere one has to resort to e-bay and the second hand market. The Japanese Pentax web store lists these FA lenses as being available:

Check out the 645 lens section in our lens database for details on  the FA lenses and user reviews. 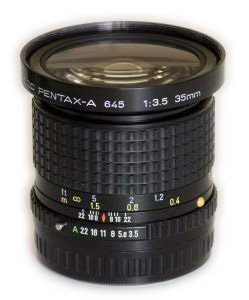 Manual focus lenses work well with the 645D thanks to the large and bright viewfinder, so the A series 645 lenses from Pentax are of interst and less expensive than their FA counterparts. These lenses have long since been discontinued and are only available on the second hand market.

The A-series cover the focal lengths from 35 mm to 600 mm with prime lenses (including an excellent 120 mm macro) and from 45 mm to 160 mm in zoom lenses. Details and user reviews are found in the 645 section in the lens database.

The A series also includes two rear converters, a 1.4x converter and a 2x converter. The latter is still available new.