The HD Pentax-DA 1.4x AW AF Rear Converter mounts between the camera and the lens. You can leave it mounted to one of your lenses if you semi-permanently need that extra reach with a specific lens. We have done just that here, where we have left the rear converter on a DA* 300mm F4 lens, which thus becomes a quite compact 450mm F5.6 lens.

These lenses provide information about focal length and exact maximum aperture (amongst other information) to the camera. When the converter is mounted this information get converted to reflect the effect of the converter:

What matters here is that the focal length is adjusted by the 1.4 factor of the rear converter since that allows the shake reduction in the camera to work correctly.

The conversion of the aperture value is more of a nice to have. The value indicated has no practical effect on exposure; the camera will meter correctly in any event. 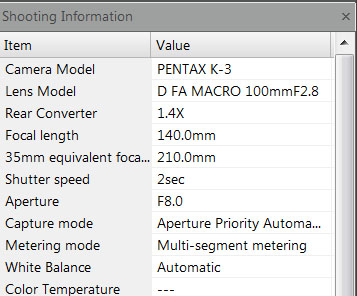 EXIF information as reported by the Pentax Digital Camera Utility

The rear converter has a Pentax KAF2 mount and thus supports autofocus lenses whether they are driven by the motor in the camera (screw drive) or a motor in the lens (SDM/DC). Focusing is done by the lens - the optical elements in the rear converter are fixed in place.  There are changes to the lenses's maximum or minimum focus settings.

If you mount manual focus lenses on the DA teleconverter, it won't support autofocus, unlike what you'd get with the now-discontinued Pentax-F 1.7x AF adapter.

The operation manual specifies that the effective maximum aperture with the DA* 55mm F1.4 lens becomes F2.4 rather than the expected F2.

Our test of the rear converter with an FA 50mm F1.4 lens and an FA* 85mm F1.4 confirm that this is also the case for those lenses. The largest aperture that can be set using the controls on the camera body is F2.4 (you don't need to worry about the exposure; metering is spot on matching this F2.4 aperture).

The minimum effective aperture is F32 as expected (F22 bacomes F32, or one stop slower).

So what is happening here? Apparently we lose the last half F-stop at the fast end.  The reason for this is unknown, but it seems to be forced by the teleconverter's firmware when a fast autofocus lens is mounted.  Perhaps this is to ensure optimal image quality or to eliminate falloff.

Using A, M and K-series Lenses

For legacy lenses the effective focal length must be entered manually on the camera, since these lenses do not provide focal length information to the camera. As an example, for shake reduction to work optimally the focal length for the Pentax-M 100mm should be entered as 140mm (or the closest value available) when the teleconverter is mounted.

Of this group only A-series lenses can tell the camera what their fastest aperture is, and the value recorded in the EXIF information will not be adjusted by the teleconverter.  Thus, the aperture will always be off by one stop in the EXIF, i.e. 1 stop too fast: 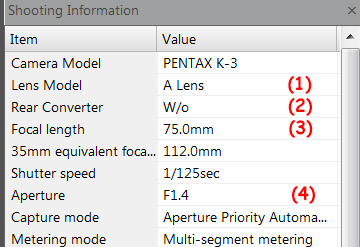 The EXIF information for A-lenses is as follows: (1) Lens series, (2) Presence of the rear converter is set to false (3) manually entered focal length, (4) the aperture recorded is the one the lens is set at, not the effective aperture which would be F2 in this case.

All manual focus lenses can be set to their largest aperture also with the converter mounted. We tested an A-series 50mm F1.4 lens set to F1.4 (effective aperture is F2 with the converter, but F1.4 is recorded in the EXIF data). We measured about 12% light fall-off in the corners, nothing to worry about in practice. At F1.7 and F2 (effectively F2.4 and F2.8) the light fall off was 8%, and from F2.4 (effectively F3.5) there was no vignetting at all.

Does this leave older cameras in the dust? Fortunately, it does not. We successfully used the rear converter on a *istD, and it works. The autofocus was less than stellar in dim light with our D FA 100mm F2.8 lens, whereas the camera delivered accurate autofocus in bright light: 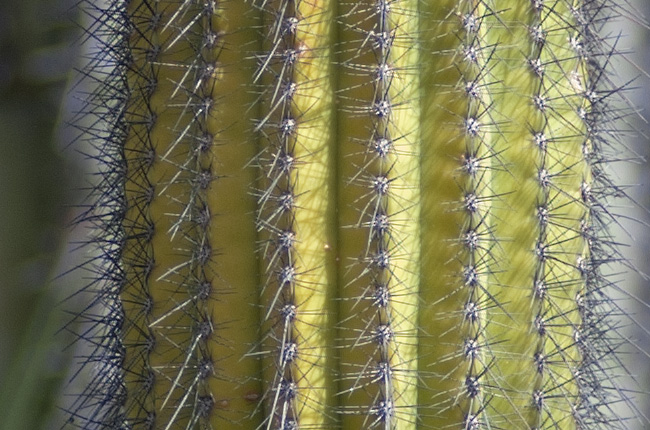 On older cameras, the aperture value does get converted to the effective aperture (F2.8 becomes F4 in the EXIF information) with autofocus lenses, whereas the focal length does not get converted. This means that shake reduction will not work optimally on older bodies that might have that feature, because the wrong focal length will be set.  SR will still compensate for camera shake, just not as much as it would knowing that the effective focal length was longer.

This tells us two things about the teleconverter: it carries out the aperture conversion internally, whereas the focal length conversion is done through the camera's firmware. 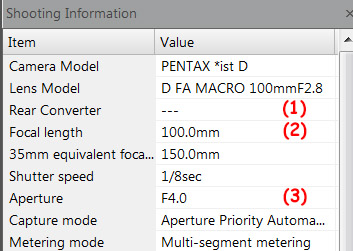 The EXIF data from the *istD: (1) presence of rear converter not shown, (2) the focal length is not multiplied by 1.4, but (3) the F-stop is reduced by one stop (we used the lens wide open for this example).

Autofocus works with Sigma HSM lenses, however, unreliable performance has been reported by our users with certain lenses. The only lens we had at our disposal was unfortunately the Sigma 30mm F1.4 DC HSM "Art", which count not lock focus with the teleconverter.  According to user reports, Sigma firmware updates may be required for proper AF performance.

Bottom Line on Conversion of Focal Length and Aperture

We have prepared this handy table to illustrate how a 300mm F4 lens set wide open will be reported by the camera - yellow indicates where an erroneous value is reported:

If you stick with newer cameras and autofocus lenses there is nothing to worry about- focal length and aperture are reported correctly.

Ready to get your Pentax-DA 1.4x AW AF Rear Converter? Click below to place an order or check current pricing.