The image quality of the DA 21 mm Limited is, as expected, very high. It delivers extremely bright and vibrant colors, with impressive sharpness and no obvious optical flaws. The sections below detail the formal findings of this review. All tests were performed with the K20D.

Center sharpness is extremely high at all apertures, while corner sharpness is acceptable wide open, and increases very fast when the aperture is closed down. The pictures below compare the DA 21mm with the DA 18-55 WR and the Sigma 17-70 f2.8-f4.5, both at 21mm. Each picture was shot with the camera on a tripod, at ISO 100, with SR turned off and 3 seconds mirror lock-up activated. The shutter was triggered with a remote.

The DA 21mm produces an unusual bokeh, busier than a dedicated macro lens, for instance. However, this texture does not degrade the image quality, and contributes to creating a 3D-like effect that has been praised by many users. The pictures below are two examples of this particular bokeh (both images are shot at f3.2).

The lens does produce a small amount of vignetting at f3.2 (around 1 EV). Closing down the aperture a half-stop (to f4) decreases the vignetting, and it becomes hard to notice at smaller apertures.

The lens produces a moderate amount of barrel distortion, visible when straight lines follow the sides of the frame. While present, this is rarely noticeable in field use. To some extent, it is to be expected of a wide lens, but should be minimized for a Limited prime.

Chromatic aberrations are very well controlled. Although CA can be visible in the corners in some extreme conditions, it is generally no more than 1 pixel wide with the K20D, hardly field relevant.

Ready to get your Pentax-DA 21mm F3.2? Click below to place an order or check current pricing. 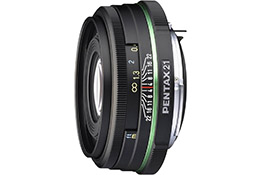