Image quality is complex. Sharpness, color rendition, bokeh, aberrations, and focus accuracy all work together to yield an image that is pleasing to the eye. Lets break down some of these in greater detail.

Overall, sharpness was very good. Sharpness was compared at various focal lengths and various apertures by photographing a brick wall using these same conditions for all images.

As can be seen from the pictures; images at 55mm, 100mm, and even 200mm are a little soft on the edges when the aperture is wide open. However, as you begin to stop down, they sharpen up nicely. Compare any of these focal lengths and see how the edges and corners sharpen up as the lens is stopped down.

Surprisingly, the images at 300mm, wide open are incredibly sharp. Granted, 300mm wide open is f5.8. But the images are tack sharp, corner to corner. Examine the mortar on the edges in the f5.8 image taken at 300mm. Check out those individual sand grains! WOW!

Overall, If you are using shorter focal lengths, it is advisable to stop down 1 or 2 stops if at all possible to maximize sharpness. At 300mm, clearly there is no need to stop down. Rather, shoot away and enjoy those razor sharp pictures.

We did not conduct specific tests to examine aberrations as we did with sharpness. Rather, we examined a variety of everyday shots and looked for items such as chromatic aberrations and pincushion distortions. In regard to chromatic aberrations, we did specifically look for purple fringing. A common occurrence in digital photograhy that can best be seen at the borders between high contrast subjects and an out of focus background (for example, a blue sky).

We found occasional instances of purple fringing. Nothing excessive, but in shots where one would expect to find this type of aberration, it was indeed occasionally present. That said, although this type of aberration was occasionally present, it was exceedingly minor. Another example of the fine workmanship and quality that can be found with this lens. Examine some of the images in the Image Gallery and decide for yourself.

We also examined these same shots for general color rendition. That is, how well did the lens capture and record colors as compared to the actual scene. The color rendition from this lens is also excellent. The clowns face shown below is an excellent example of how vibrant reds are captured as a bright red. All the colors in this image, as well as the accompanying images of the western themed carousel are displayed exactly as they appeared.

Bokeh can be defined as how a lens renders the out of focus areas in an image. Some lenses will render these out of focus areas in a manner that is pleasing to the eye, while other lenses render these same areas as harsh. Bokeh is also subjective. Some photographers will find the bokeh of a particular lens acceptable, while another photographer will find the same lens unacceptable, or harsh.

We found the bokeh pleasing and never harsh. The image below shows some lovely purple flowers with those flowers in the center in focus, and those in the foreground and background out of focus. Overall, the background is rather pleasing.

Vignetting occurs when the edges or corners of an image receive less light than the center. The cause of these darkened corners may be attributed to the presence of filters, the lens hood, or the lens itself. Vignetting (if present) can generally be seen at the widest focal length and largest aperture.

Ready to get your Pentax-DA 55-300mm F4-5.8? Click below to place an order or check current pricing. 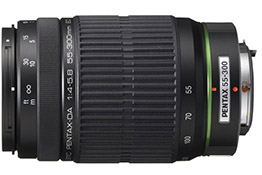