For the 50mm image, a value of +2 in the geometric distortion field was required to compensate for the barrel distortion. At 63, 75, 95, and 135mm, the values of +1, 0, -1.6, and -2.0 were used, respectively. As the numbers would indicate, the only distortion-free focal length is 75mm, anything lesser than that will have barrel distortion that increases rather linearly. A similar behavior is observed with pincushion distortion at focal lengths above 75mm.

The Pentax-DA* 50-135mm F2.8 exhibits noticeable barrel distortion at both ends of its zoom range.  At 75mm the distortion is negligible, and beyond 75mm it switches to the pincushion type.  While we've certainly seen much worse, we didn't expect quite as much distortion from in a high-end lens like this one, especially considering the fact that it's meant for use with crop-format (APS-C) DSLRs.  The bottom line is that while the 50-135mm isn't out-right bad in terms of distortion, we can't say that it's as good as a prime at either extreme.

Distortion of this degree can be easily and effectively be corrected in-camera or during post-processing at the expense of a slight amount of resolution and field of view. 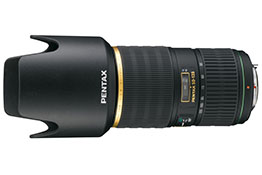