Pentax SMC FA 20mm/2.8 was the widest auto focus prime lens before the introduction of digital. Soon after Pentax introduced SMC DAmm 21/3.2 Limited lens the comparison between the two was made and FA 20 became a scarce commodity whereas its digital sibling DA 21 was being mass produced.

On digital the FA 20 is not as wide as it used to be on film. Yet, it holds its own very well even today.

The construction of FA 20 is typical for its time - solid yet sufficiently light for comfortable hand held shooting. There is no wobble or rattle of any kind. The inner barrel is made of metal whereas the outer shell is high quality plastic. Like all other FA prime lenses, the bayonet is metal. The lens has a distance scale window with clear DOF markings for smaller apertures F8, F16 and F22. Aperture ring with standard A(uto) position is present. The "A" setting of aperture is required for use with modern digital cameras. Naturally, it can be used on all film cameras including (see Fig 1) for example, venerable Pentax MX.

The lens has 67 mm filter thread diameter and it does not rotate during focusing, which makes application of polarizing filter completely trouble free.

The focusing ring is sufficiently wide and it is made of a rubber like material. Specifically my sample has a minor inconsistency in smoothness of manual focus operation. Between 0.4 and 0.7 m focus scale marks it resists the rotation ever so slightly more. All in all, the focusing action is smooth and the focus throw is just right for fast AF operation and for precise manual focusing. It takes approximately 90 deg of rotation from infinity to 0.25 m which is the minimal focusing distance of this lens.

My sample is very sharp at all apertures although of course towards F22 the sharpness decreases due to diffraction. As you can see on Fig 2, wide open sharpness is very good.

The resistance to flare is very good although it is possible to catch a flare which is illustrated by Fig 4 (picture on the Fig 4 was slightly cropped). Please notice however that there is no decrease in contrast.

I would characterize the bokeh quality of this lens as smooth, although I wouldn't recommend taking pictures with lots of branches and leaves on the background as they could be rendered in a nervous manner.

To sum up this section, in my opinion FA 20 produces excellent images and copes very well with all kinds of lighting conditions that may come its way.

On film FA 20 could be used as an ultra wide angle. On digital, taking into account 1.53 crop factor of Pentax DSLRs, FA 20 gives the angle of view similar to that of 30 mm lens, which makes it only moderately wide angle. As it focuses as close of 0.25 m, it can be used in a number of situations.

It can be used for landscape as a general moderate wide angle (Fig 5).

One can even produce a humorous portrait exaggerating certain features of the subject (Fig 7).

Finally, under the good lighting it may be able to produce the so called 3D effect (Fig 8).

A Mini-comparison with SMCP DA 21/3.2 Limited

It is practically inevitable that FA 20 will get compared with DA 21. So, let us have a brief detour and have a brief look on how these two lenses stack up.

Still DA 21 has one distinct advantage over FA 20. It is the quick-shift focusing system that allows manual focus touch up once auto focus has done its work. However given relatively slow speed of DA 21 and significant DOF, this cannot be considered a serious detriment of FA 20. In fact, the focusing ring of DA 21 is narrower and it can prove somewhat uncomfortable if one has large hands or has to work in gloves. Also DA 21 has shorter focus throw than FA 20 which helps auto focus system but does not help precision manual focusing.

DA 21 seems to have a bit less barrel distortion than FA 20. However under everyday use it simply does not show.

DA 21 has somewhat smoother bokeh than FA 20. Although FA 20 produces smooth and unobjectionable bokeh, it is just that DA 21 has more round aperture.

Specifically, as I wrote above, my sample of FA 20 is extremely sharp even wide open so that it does not loose any points to the more modern lens. In fact, my sample of DA 21 is best stopped down to F4 because wide open it is not as sharp as I would like it to be. Therefore the slight advantage of FA 20 in speed and wide open sharpness makes it preferable in a number of situations, especially if the camera is equipped with Katz Eye focusing screen and/or if the photographer is shooting while wearing glasses.

After re-examination of the above paragraph, I am thinking that perhaps my opinion about DA 21 wide open sharpness is not entirely correct. It may be caused by the fact that I was shooting in low light hand held whereby my unstable hands caused the perceived lack of sharpness of the resulting images.

It is no wonder that on the second hand market Pentax FA 20/2.8 fetches a good chunk of money often shadowing the price of DA 21/3.2 Limited. In my opinion it fully deserves all the praise - technically, artistically and financially.

Ready to get your Pentax-FA 20mm F2.8 Prime? Try the Marketplace on PentaxForums or search e-bay.

Also, if you currently own this lens and would like to write your own review, please visit our Pentax user reviews section.

Ready to get your Pentax-FA 20mm F2.8? Click below to place an order or check current pricing. 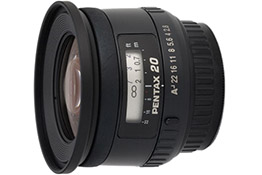