As the "Limited" qualification indicates, it is one of the high quality metal bodies which comes in two choices of colors, either black or silver finish. Moreover, the rather unusual 31 mm focal length tells us that is part of the special series of lenses along with the 43mm and 77mm FA Limited’s. Most probably a marketing decision to allow a clear distinction of these lenses from other models, Pentax wanted these lenses special, but also wanted their users to know it explicitly. The lens includes a glass-molded aspherical lens elements which is made to minimize spherical aberrations (hence the AL denomination). The ED stands for extra low dispersion to reduce color aberrations. And finally it uses the "Ghostless Coating" as well as its sister lenses and some star "*" lenses. This coating is said to have been developed for the Tokyo and British Traffic Police Unit for cameras used to take pictures of license plates at distance, an application especially prone to flaring with traffic and car lights at night. All these aspects put together provides an incredibly high quality of rendering to these limited lenses.

Pentax (from www.pentaximaging.com) describes this lens as having a "thin, lightweight design" which " makes it an ideal carry anywhere lens". However, as can be read throughout the forums, this lens is one piece of a rock, and looks pretty bulky (although at the same time so elegant), that is compared to its sister lenses the 43mm and 77mm.

Undeniably the lens was designed to be as compact as possible and the limited design lives up as well here. But this lens is a full frame, wide angle, and bright lens, for K-mount, which makes it physically impossible to be quite any smaller. Indeed, to fit the K-mount, such a lens needs a retro fitting lens group to allow for enough distance to the sensor or film (for the mirror of course). Only rangefinders can proudly show their tiny 30mm bright lenses. In the following picture, you can see the lens compared to a variety of older primes and recent zoom lenses (covering the 30mm focal length). And indeed, it is not that big, slightly bigger than the 35mm Super-Takumar f2.0 (also a quite fast lens). But the 31mm is autofocus which probably explains the slightly bigger diameter (for the rear part of the body at least), and the front of the lens is limited by the size of the front element.

To have a smaller lens, you have two options: either go for bigger minimum aperture (e.g. the Pentax-m 28mm 3.5 shown in the pictures) or go for a lens designed for APS-C (e.g. for low budget the new SMC DA 35mm f2.4 AL, or the SMC DA 35mm f2.8 Macro Limited). In any case, there is a little something you would probably feel like losing by going for these other lenses as you might discover in the rest of the review (namely quality of rendering and brightness).

But what truly makes this lens feel somewhat more bulky than the other so refined FA limited, is not so much its size. only slightly bigger, but it's weight, there is some heavy metal and glass in there, 12.2oz compared to 7.6oz for the DA 35mm macro ltd and a mere 4.4oz for the DA 35mmf2.4. And most of this weight is due to the huge front element. You can see it in the comparison pictures. There is simply no other way to have such a bright lens at this focal length. And despite not being an optical engineer, I am not so sure Pentax would provide a much smaller DA 31mm 1.8 version (specifically designed for APS-C digital) as there would be more constrains for these new designs due to the retrofitting lens group which aims at minimizing purple fringing or chromatic aberration by having light touch the sensor as much perpendicularly to it as it can.

Compared to the closest equivalent lenses in the non-Pentax lenses, there is the Sigma 30mm 1.4. Slightly brighter, it is also heavier (15.2oz) and bigger (59*76mm), despite being designed specifically for APS-C sensor size (of course the smaller aperture is much the reason of the bigger size).

However bulky this tank build lens can appear, once fitted on your Pentax body you will feel how delightful it is to use. For one, its weight actually provides the lens, a very good feeling of stability, and the size makes it very comfortable to use (most certainly for big hands, but also for small hands like mine). A smaller lens does not necessarily provide this comfortable feeling of ease of use in your hands.

In the end, you can effectively feel that the lens is a pretty good "carry anywhere lens" if you need that extra brightness or out of focus rendering quality. Perhaps the only thing that might pull you back from feeling so, is that it is such a jewel you might be afraid it could get a scratch while walking around in the streets or elsewhere...

Perhaps the only negative aspect of the design of this lens is that the built in hood cannot be removed. Hence you can only put filters of the threaded ring diameter, and there is no place to put a filter adapter for exchangeable filters. However, I have seen somewhere in a forum someone adapting something to do it.

Ready to get your Pentax-FA 31mm F1.8 Limited? Click below to place an order or check current pricing. 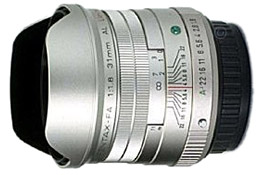