The smc Pentax-FA 43mm F1.9 Limited is a premium lens that stems from the 35mm film era but has enoyed an even greater deal of popularity in the digital age. It is a member of a trio of prime lenses fondly known by fans as "The Three Amigos"; the other two lenses are the smc Pentax-FA 31mm AL Limited and smc Pentax-FA 77mm Limited.  All three of these FA Limited lenses are in production as of mid-2014, and despite rumors, it seems that they aren't going away any time soon.

Unlike what one might expect, Pentax "Limited" lenses are not produced is small or limited quantities.  Pentax instead uses this term to refer to lenses with three key characteristics: premium image quality, a metal barrel, and a compact form factor.  The build quality of these lenses reminds us of the solid feel of manual focus lenses.

The Pentax 43mm lens is available in black and silver

The FA 43mm Limited was introduced in 1997 as a high-end normal lens for film SLRs; on digital APS-C cameras, it serves as a very short telephoto lens.  In this review, we will be focusing exclusively on how the lens performs on APS-C DSLRs, where it is excels at group portraits and landscape photography. With its F1.9 maximum aperture, it can do a good job low-light scenarios. It commands a relatively high price or $749.95 (US MSRP) but is nevertheless a popular lens; read on to see why this might be!  (Note: the silver version is not subject to the US MAP pricing restriction, and it is therefore available for $596.95 at B&H, while supplies last).

The Pentax 43mm employs the traditional Pentax screw drive focusing mechanism, meaning that it will autofocus on all Pentax DSLRs, including the older ones. The lens also has an aperture ring and can thus be used on all Pentax K-mount film cameras.  Below we show the lens mounted on a 1976 Pentax ME camera. 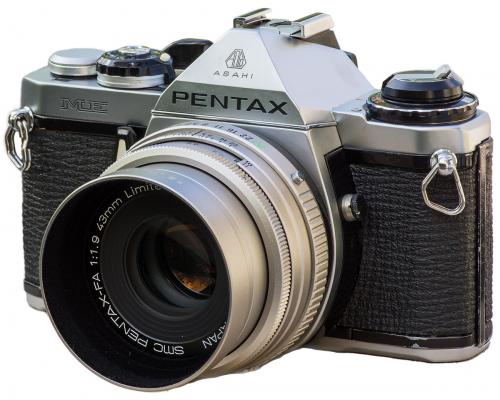 Ready to get your Pentax-FA 43mm F1.9 Limited? Click below to place an order or check current pricing. 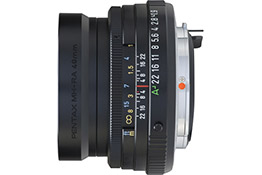