The Pentax K-1 is compatible with every Pentax K-mount lens ever made without the need for an adapter, and with little or no restrictions in terms of functionality: this includes over 204 genuine full-frame lenses in addition to thousands of third-party offerings. Furthermore, you can adapt M42, M37, 645, and 6x7 lenses.  Refer to our lens compatibility guide for further details, or seek advice in the lens forum. 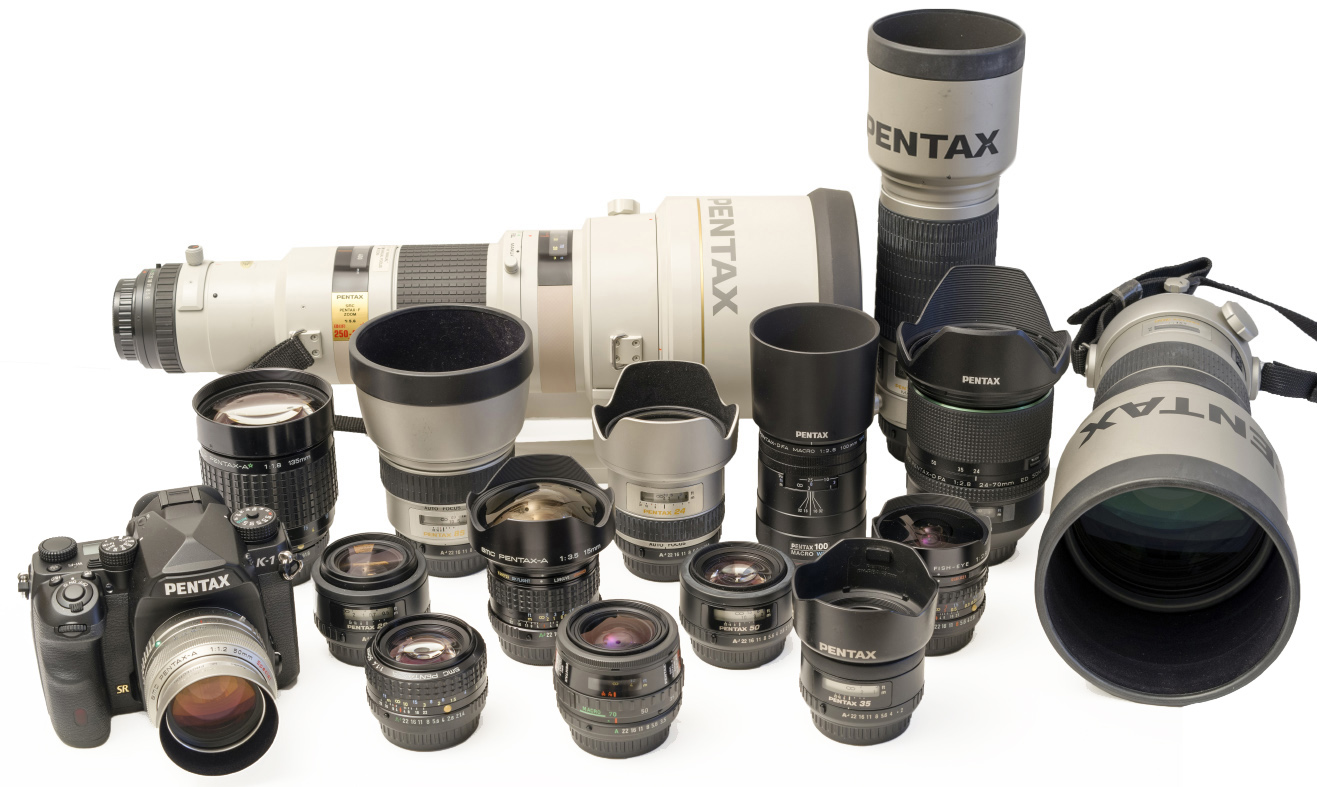 K-1 with a selection of current, legacy autofocus, and legacy manual focus lenses

Of Pentax's 204 genuine full-frame lenses, 15 are current autofocus, 67 are legacy autofocus, and 122 are manual focus.  Follow the links for a complete listing.

Of the 15 current AF lenses, 5 are all-new for the K-1, 2 are macros developed during the digital era, 5 stem from the fim era but are still in production, and 3 are crop lenses officially deemed to cover the full-frame image circle.  Those crop lenses have full-frame correction profiles in the K-1.  We discuss all these lenses in more detail toward the bottom of this page.

The remaining 41 DA crop lenses can be used in the K-1's APS-C crop mode, and at least a handful of them, such as the DA* 55mm, DA 50mm, DA 40mm Limited, and DA* 60-250mm can reliably be used in full-frame mode.  We will conduct a detailed investigation of crop lens performance on the K-1 in an upcoming review.

All of these lenses include the modern HD coating, silent autofocus, and weather sealing. 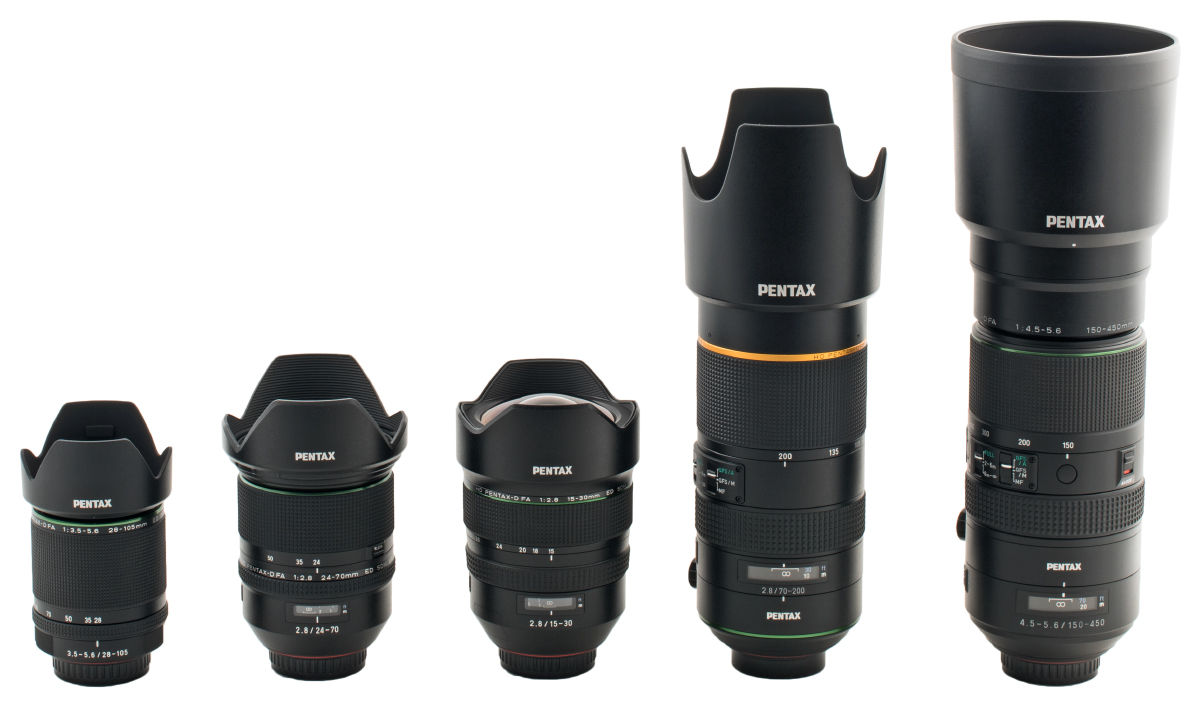 We had the opportunity to thoroughly test these five lenses on the K-1.  Optically, they all performed at modern standards— especially the 70-200mm, with corner-to-corner sharpness throughout the aperture range, and the 28-105mm, with impressive performance for its size.  In-depth reviews of each lens will of course follow.

Some users might be discouraged by the large size of the four rightmost lenses.  They are no doubt big and heavy, but we find this to be a worthy trade-off for the image quality they deliver.

Fortunately, Pentax also has a compelling answer for users who seek compact lenses.  The FA and FA Limited primes are particularly popular choices covering 31mm, 35mm, 43mm, 50mm, and 77mm.  The K-1 includes in-camera correction profiles for all these lenses, even though they stem from the film era.  They are still in production.

The two current D FA macro primes were designed during the digital era and optimized for full-frame use.  The 100mm macro features weather sealing while the 50mm has a focus clamp. 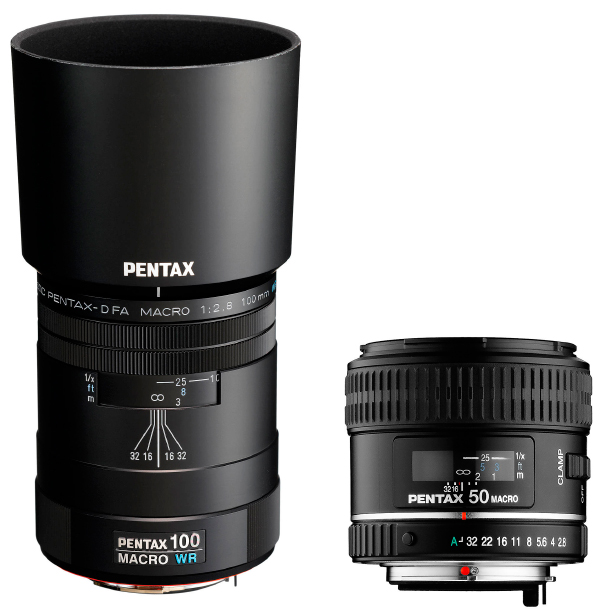 Ricoh Imaging has confirmed that the Pentax DA★ 200mm F2.8, DA★ 300mm F4, and DA 560mm F5.6 lenses support the full-frame image circle.  To this end, the K-1 includes correction profiles for these lenses in both full-frame and crop modes.  These lenses were originally marketed as APS-C only. 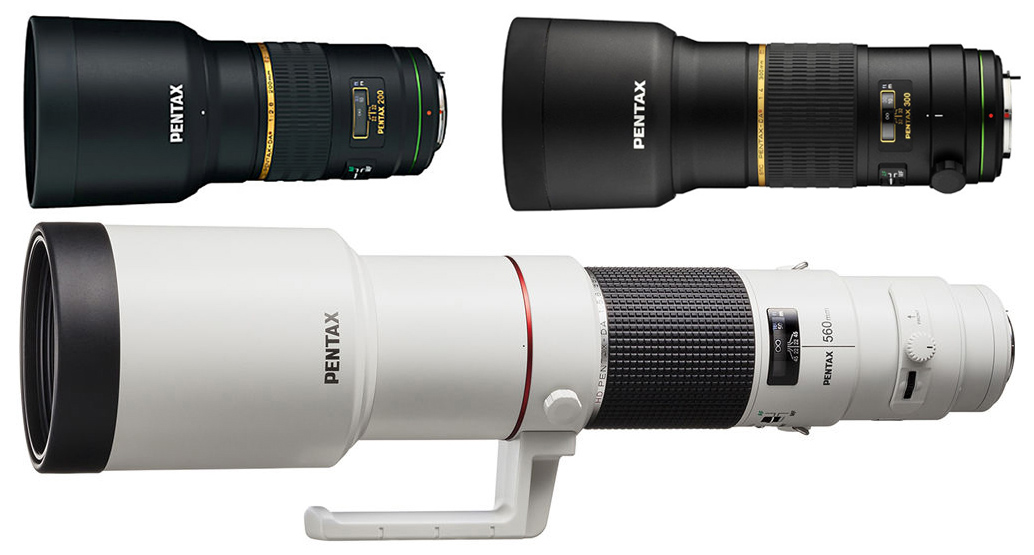 An investigation of other DA lenses will follow in a separate review. 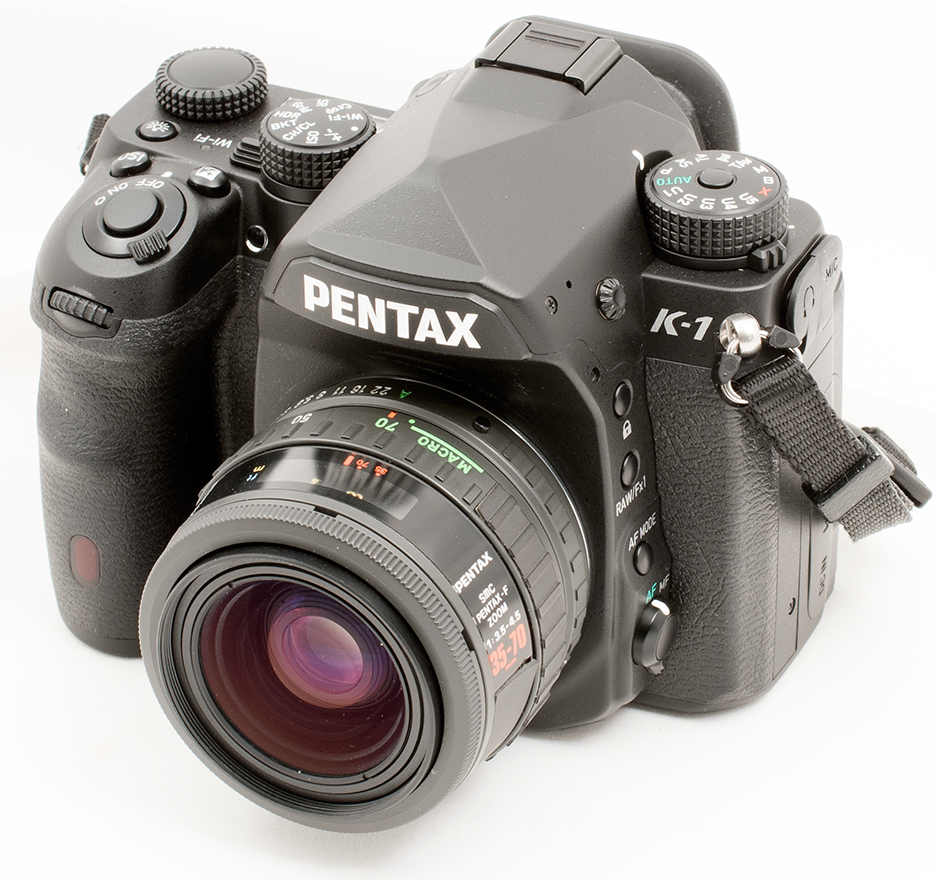 In fact, with over 80 genuine autofocus choices, a shortage of lenses is the last thing that K-1 owners will face.  Thanks to the vast array of Pentax film-era lenses available second-hand, K-1 owners can tailor their kit to their liking, whether it be to optimize image quality, minimize weight, or keep costs low.  For example, the 8-ounce (235g) F 35-70mm lens pictured above can turn the K-1 into a highly portable walkaround camera for around $50.

Also, the K-1 makes the use of fully manual lenses easy, just like other Pentax DSLRs.  Beyond using the green button to meter in M mode, the only additional step needed is to tell the camera what the focal length is, either at startup, or via the menu.  This allows the in-camera stabilization system to work optimally even with 50-year-old lenses.  While a manual lens tutorial is beyond this scope of this review, we invite you to read our K-1 lens compatibility guide for more details.

The main issue currently surrounding the Pentax K-mount is limited third-party support.  Tamron offers a handful of aging autofocus lenses, while Sigma only offers one full-frame Global Vision lens in the K-mount (the 35mm F1.4), and that lens causes scratches to the K-1 body due to a poorly-designed lens mount (as of May 27, 2016, Sigma is offering a repair service to resolve this issue).  It's possible that third-party support will be expanded if user demand increases.

Next: Kits and Accessories