While it hasn't been designed with retro styling in mind, the pointy prism housing of the K-1 reminds us of classic Pentax DSLRs from the film era.  Overall, the camera gives off an elegant appearance without being deliberately flashy or sacrificing function. 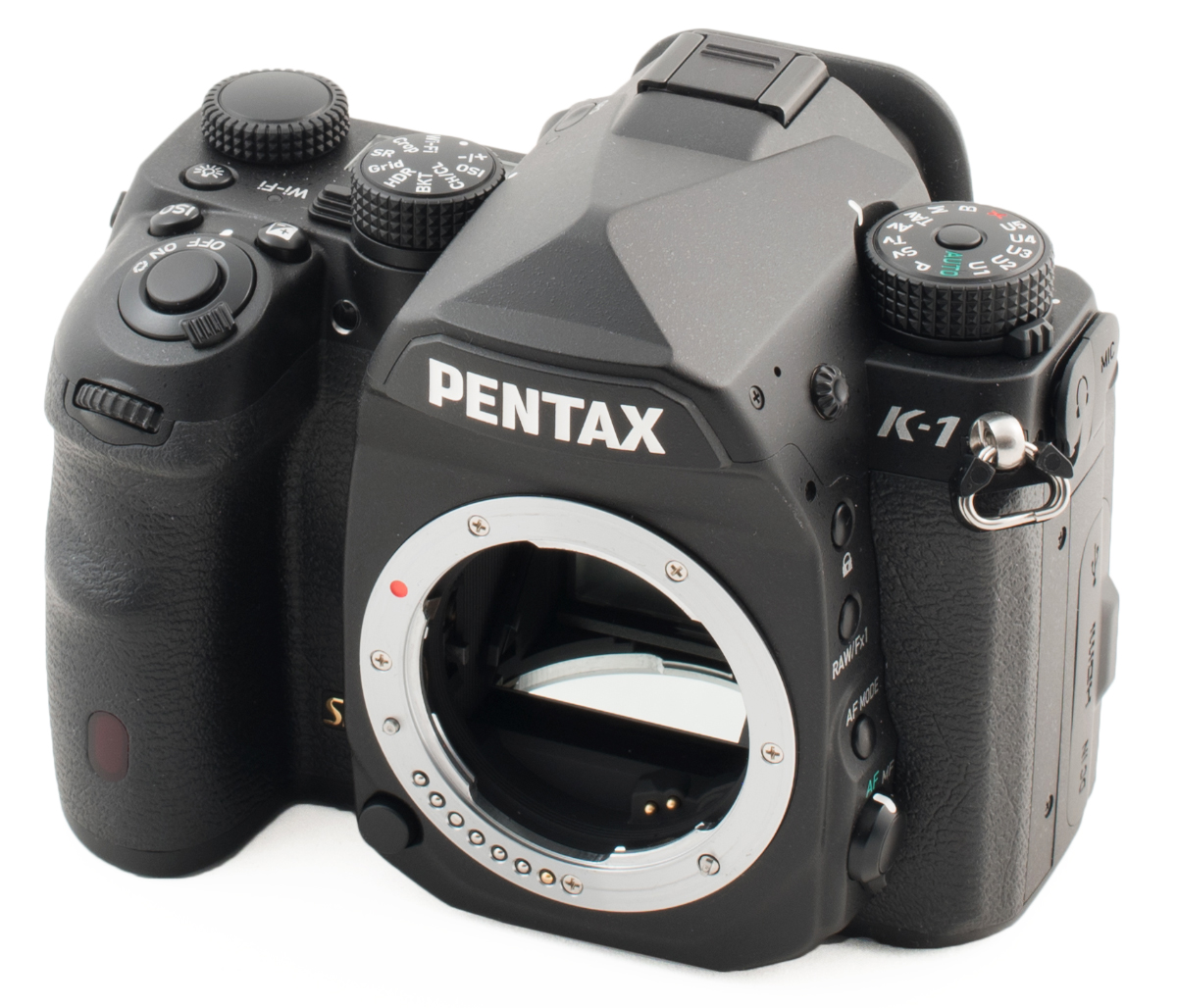 Like the previous top models from Pentax, the K-1 feels like a premium product and is built around a magnesium alloy body with an inner chassis of steel. 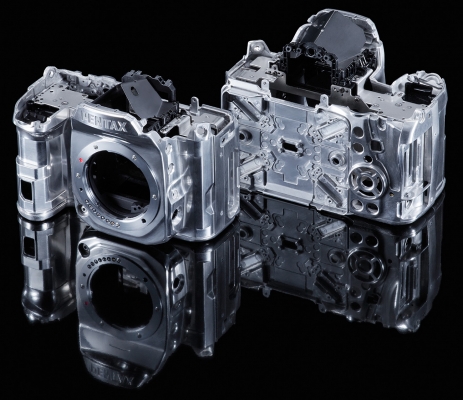 The camera feels solidly built. Some parts are made of plastic, most notably the SD card door, the buttons and dials, and the housing for the rear monitor. The surface has a nice, leather-like non-slip covering. Compared to the Pentax K-3, the K-1's shutter button half-press does not have a clearly defined click stop feel. 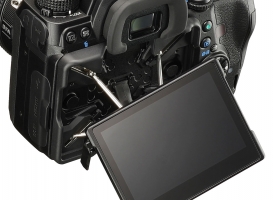 The mechanism that permits the screen to tilt in all directions is made of steel, and the plate to which the monitor is attached with a hinge is of made metal. One might be concerned that the tilting screen assembly could be a weak spot, but it feels sturdy and we have seen Ricoh representatives suspend the camera by the monitor back plate (not by the plastic encased monitor itself) to show off its durability. If there is a weak spot it would be the fastening of the hinge and bracket to the plastic encased monitor or perhaps the hinge itself. Time will tell, but it feels solid and snaps decisively into place when stowed.

When the camera is turned off and you move it around, you may hear an occasional "clunk" sound from within. This is caused by the sensor stabilization assembly which floats more or less freely when powered off. When power is on the sensor assembly is held in place by electromagnets. While the clunk sound can be disconcerting for users new to Pentax, rest assured that it's perfectly normal.  In our years of testing and using Pentax cameras, we have never encountered any reliability issues arising as a result of this design and we expect the K-1 to be equally reliable. To reiterate: Do not return the K-1 as a result of this internal clunk sound, as it is not a defect.

If you're right next to the camera, you will also hear a faint sound when half-pressing the shutter button, as the SR mechanism "arms" itself while the meter is operating.  The SR operating sound is louder with telephoto lenses, especially in live view.

Speaking of sounds, you may also hear a buzzing noise when the in-camera actuator stops the lens down in live view, at the time of image capture, or during DoF preview.

Like other high-end Pentax DSLRs, the K-1 has the ultrasonic Dust Removal II system which aims to keep your sensor clean by shaking off any lingering dust.  By default, dust removal runs both at startup and shutdown on the K-1.  The system is practically inaudible. 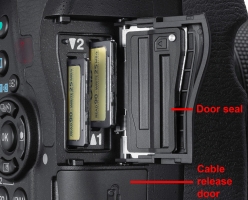 The body is sealed against dust and rain. This includes seals around the SD card door and battery door. The camera cannot be submerged, but paired with a sealed all-weather lens it should be able to be used in light rain and snow.

Note that frequent zooming (on lenses that do not zoom internally) can effectively pump water into the camera if the lens is wet, so we do not recommend this.  Always be cautious when shooting in the rain and use due diligence.

The SD card door is spring loaded and sturdy. There is room for two SD cards.  The door could be a bit larger for easier opening, perhaps.

Below the SD card door we have an input socket for an electrical cable release like the Pentax CS-205. This socket is protected from rain and dust by a rubber door.  Be sure to keep this door (as well as other flaps) clean to ensure proper weather sealing. 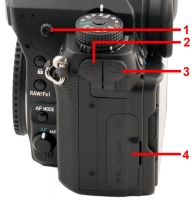 On the left hand side are a number of electrical connections:

The K-AC132 is the OEM power adapter.

These ports are weather sealed by the rubber flaps that serve as doors, and for the PC contact, by a screw-in cover.

The last port is found on the bottom. That is the connection to the grip. It is sealed with a rubber flap.

When a weather-sealed zoom lens is mounted on the camera, it's normal for air to flow through the camera and be felt on your face.  You will most likely also hear a soft hissing sound.

The tripod mount is placed in the optical center line and is made of metal. It is far enough from the battery door that one can exchange the battery with the camera mounted on a tripod, even when using a fairly large mounting plate.  There is no lining to provide additional friction underneath the camera, however. 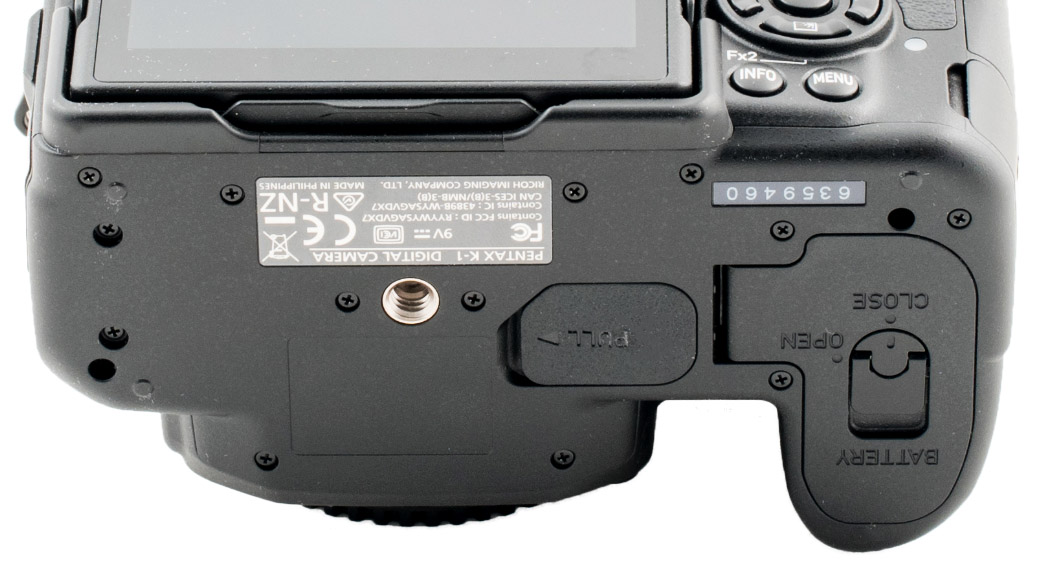 We appreciate the thoughful placement of the mount, as a blocked battery door is the last thing anyone would want to get in the way of a photo opportunity.

Shutter life is also an aspect to take into account when judging the build quality. The K-1's shutter is rated to 300,000 actuations, which is a new high for any Pentax camera and 100,000 actuations above the Nikon D810's shutter rating.

We are pleased that Pentax has managed to keep the camera fairly compact even with the extra space requirement of the shake reduction mechanism and the much larger pentaprism necessitated by the larger sensor format. The K-1 is not that much larger than the K-3 and we have confused the two more than once when fishing a camera out of our bag.

Table: comparing K-1 vs. other Pentax and full-frame DSLRs

The main price to pay for going full frame is heft. The camera weighs just over 1 kg loaded with battery and SD cards: more than any other Pentax K-mount body and about 20% more than the Pentax K-3.

The K-1 is of comparable weight alongside other full-frame cameras in its class, though both the Nikon D810 and Canon 5DS are slightly lighter.

The build quality of the Pentax K-1 is top-notch and we have not identified any weak points that might not last over time.  This camera is built to at least the same professional-grade standards as the 645Z. The shutter is rated for 300,000 actuations which is on par with the best on the market. The body and all ports are weather sealed so one doesn't have to worry if rain or snow should kick in during an outing with the K-1 (provided that the lens is weather sealed as well, of course).