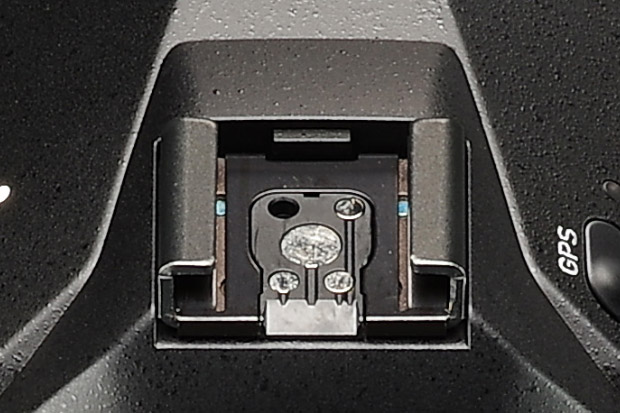 The K-1 has no built-in flash, but is furnished with a hot shoe with the contacts required to operate a Pentax flash in its various ways of operation. There is one exception: the original TTL flash protocol is not supported as we have become used to. The *ist D series are the only DSLRs with TTL support. TTL has been succeeded by P-TTL (programmed TTL).

It is nice to see that the K-1 has retained an old-school PC X-sync contact to which non-dedicated flashes can be connected. No camera controlled flash automation is available when using this contact.

The top flash sync speed is 1/200s. The speed can be adjusted with custom function 7. The following values are available:

There have been reports that certain third party flashes do not work with the K-1 with P-TTL automation whereas they work just fine with the previous models like the K-3 etc. We wonder if the problem could be resolved by lowering the flash sync speed to that of the K-3, 1/180s, though we did not test this hypothesis.

The flash modes that can be set on the camera are as follows:

These modes must be combined with the modes on the flash gun itself to enable advanced features like rear curtain sync, high speed sync and multi-flash.

Notes pertaining to the table above:

The difference between "always on" and "slow speed sync" is illustrated by this example (click either thumbnail to enlarge):

The presentation above relates to P-TTL capable flash guns from Pentax or fully compatible third party flash guns (i.e. Metz or Sigma units). If one uses the PC X-sync contact or an incompatible flash in the hot shoe the only relevant mode is the always on mode and the flash will fire unless the shutter speed exceeds the sync speed. There will be no pre-flashes emitted.

What is P-TTL anyway? This is a method whereby the exposure meter in the camera sets the flash exposure and one or more of shutter speed, aperture, and sensitivity. Which exposure parameters it set depends on the exposure mode selected (Auto, P, Tv, etc). The exposure meter bases its calculations on a pre-flash that is emitted just prior to the main flash. P-TTL flash automation is not available with M and K series lenses, since the camera can neither control the aperture nor determine which aperture value is set on the lens. Users of screw mount lenses must also forego P-TTL automation.

We noticed no unduly delay between pre-flash and main flash. The main flash basically fires instantly. Autofocusing takes place prior to the pre-flash.

By design there is a delay between the red-eye reduction flash and the P-TTL pre-flash. That is to allow the subject's eyes to adjust to the bright flash light before the main flash fires.

One of the flash guns must be mounted on the camera and it acts as a controller for the other flash gun(s). The flash guns communicate optically by signals encoded into a pre-flash.

Third party radio controlled triggers are available. A favorite among Pentax users are the Cactus V5 and V6 radio trigger systems. These triggers do not support P-TTL, so the light output of the flash guns must be set manually unless the flash guns have built-in light sensors as was the norm in the good old days. For further information read our review of the Cactus V6 triggers.

A wireless P-TTL capable strobe system is available for Pentax from Priolight. These strobes support high speed sync and are powerful enough to be used outdoors to freeze fast movement, for example. Read all about it in this article.

Going beyond using just a single flash gun or two can be somewhat overwhelming. It doesn't get any easier due to the fact that the lens series also affect the matter. What to chose and how to work it? Creating a flash set-up for a studio can be a daunting task. Forum member Nigel McGregor has developed a comprehensive flash guide which you'll find here.

Since the K-1 has no built-in flash, the flash modes that can be set on the camera for an external flash are limited to the basics (and hence uncomplicated, which is a good thing). To achieve advanced flash operation one must set the desired mode of operation on the flash unit itself (high speed sync, rear curtain sync, etc).  Of course, we're happy to see that the maximum sync speed has also been increased to 1/200s.

In connection with a recent P-TTL capable flash the various features are relatively easy to get to work.

To achieve wireless flash control at least two flash units are required: the one mounted in the hot shoe will act as a wireless controller, so the cost of an extra flash unit may be waiting down the road as a result of the lack of a built-in flash.

We would have preferred a built-in flash for convenience and also to save the cost of that extra flash, but compromises must be made and we instead got built-in GPS and Wi-Fi in a fairly compact body.

Next: Performance and Burst Mode