The K-1 is the first Pentax camera to offer three distinct ways to tether.  On a PC/Mac, a free plugin for Adobe Lightroom (6 or CC) offers basic file transfer functionality over USB (you'll need a micro E cable), while the commercial Pentax Image Transmitter 2 software provides a larger set of features, including live view and exposure control.  A firmware v1.10 or newer is needed for either of these to work with the K-1.

Wireless live view, settings changes, and files transfers are also possible via the K-1's built-in Wi-Fi and Ricoh's free Image Sync smartphone/tablet app, which is available for Android and iOS (this is the same app used for other Pentax/Ricoh cameras with Wi-Fi).

Beyond these sophisticated methods, you can use an infrared remote or cable release to trigger the K-1's shutter.  The K-1 has IR ports on the front and back of the camera.

If your primary goal is to quickly be able to view captured photo on a computer, the Lightroom plugin gets the job done.  With the latest version of the plugin, photos are also saved to the camera's memory card(s) while tethered.

Read our review of the plugin for more information about its features and performance. 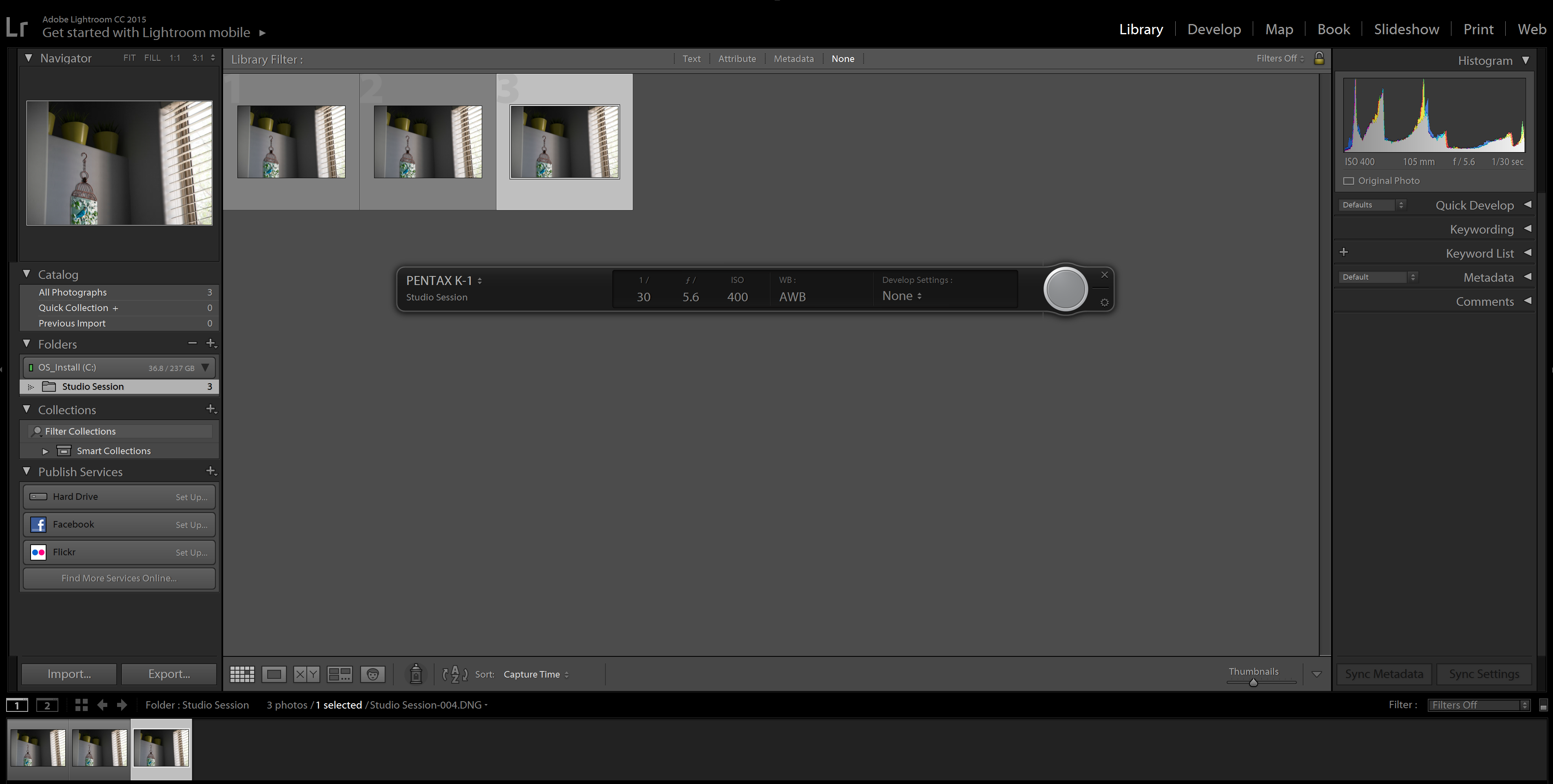 The Image Transmitter 2 software is sold separately.  It enables USB tethering with the Pentax K-1 as well as the medium format 645Z and 645D.

Image Transmitter 2 offers many more features than the Lightroom plugin, including live view, control over the exposure, and options to control which file formats are transferred and whether or not to save files to the camera's card.  This software also allows you to operate the camera's autofocus on demand and zoom in on the live view.

Still, the user interface is rather basic, especially considering the relatively high price tag of the software.

More information can be found in our review of Image Transmitter 2. 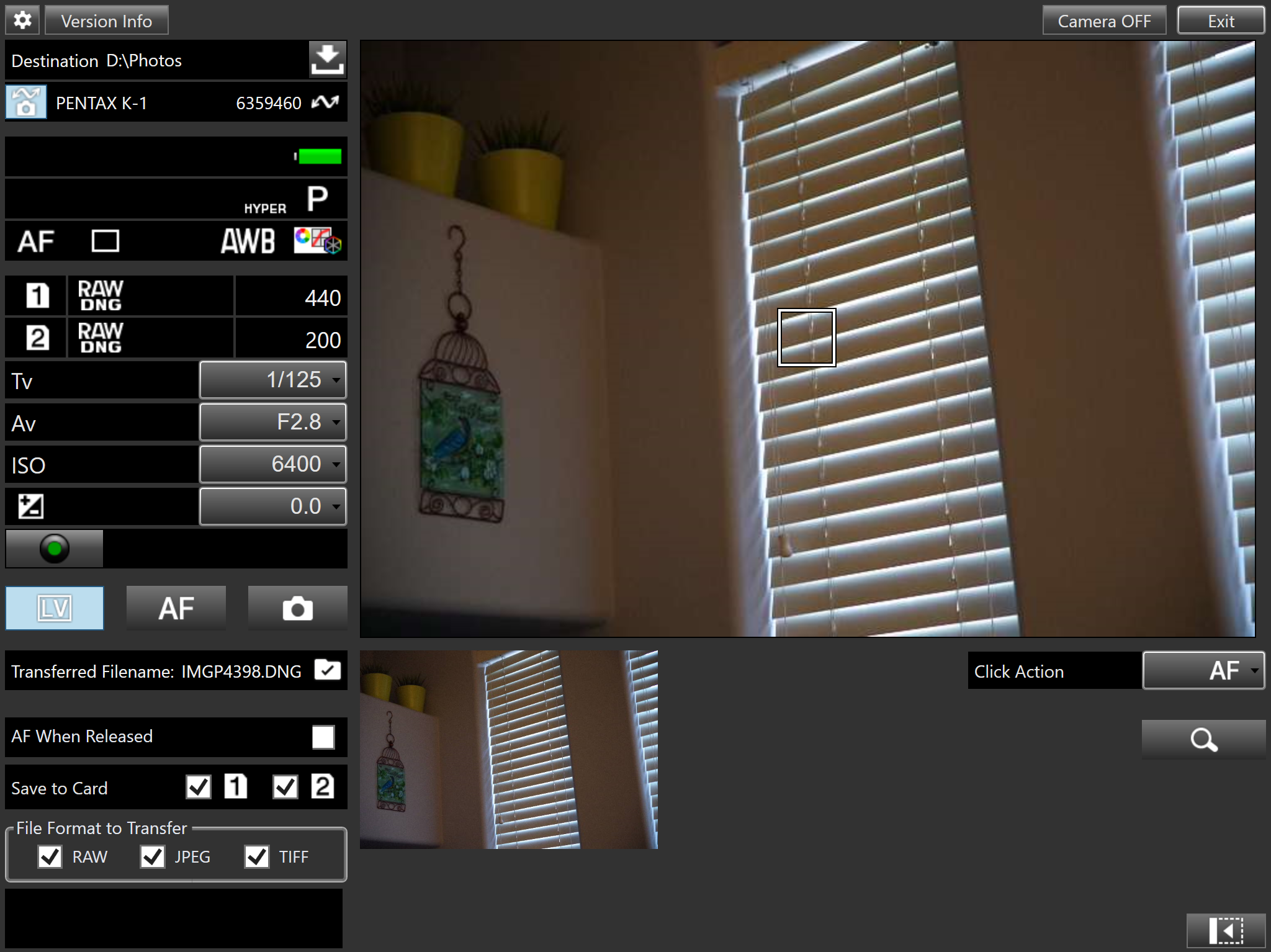 Image Transmitter 2 with live view on

Apart from Lightroom, we do not know of any other third-party programs that can tether with the K-1.  In this respect, support for Pentax is much more limited than other brands.

The wireless Image Sync app supports live view, focusing, exposure changes, and adjustments to the white balance.  In addition, a photo browser function allows you to transfer files from the camera to your device.  The v1.10 update (released on March 10, 2016) is needed for the app to work with the K-1.

Since the Pentax K-1 does not have NFC, you must manually connect to it by selecting its network name and entering the password on your iOS/Android phone or tablet.  This information can be found in the camera's setup menu. 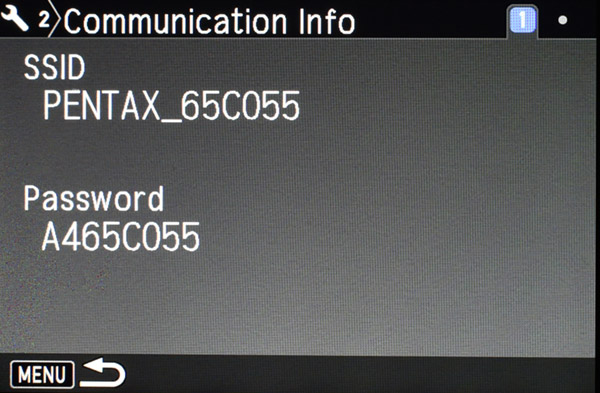 There is a known issue with the current version of the app.  Once your device is connected to the K-1's network, open the app and tap on the K-1 button.  If this results in an error message, select the option to start the app without a connection.  Despite the wording of this button, the app will communicate with the camera and and allow you to use live view and transfer files.  Just ensure that your phone is actually connected to the K-1's network.

Overall, the K-1's wireless range and stability is good; far better that what was afforded by the O-FC1 FluCard on the K-3/645Z.  Image Sync has a very modest ~0.3s of latency in live view mode.  The photo browser page shows thumbnails quickly, but file transfers are generally slow (1-2 Mb/s) and thus this feature is mainly useful for small JPEGs.  Although there is no progress bar, an indicator displays the number of remaining files.

A missing feature is live view zoom or enlargement.  You are limited to an image that fits the width of your device's screen.

You can learn more in our guide to using Image Sync.

We appreciate the flexibility resulting from the fact that the K-1 supports wireless tethering as well as two different forms of USB tethering.  While we're identified a number of small issues with the features in Image Transmitter 2 and Image Sync, both are easy to set up and work reliably.

The main area in need of improvement is file transfer speed, especially for Image Sync.  Since the K-1 only has a USB2 port, USB transfers are also somewhat slow, but still around ten times faster than wireless transfers.  Typically, RAW files take 3-8 seconds to show up on the PC.

Feature-wise, the main limitation, in our eyes, is that the wireless features cannot be utilized from a PC (the only workaround is to emulate an iOS or Android system).  Better third-party support would also be welcome.