Let us first evaluate the physical aspects of the Pentax K-3 before we move on to the user interface, image quality, and performance. 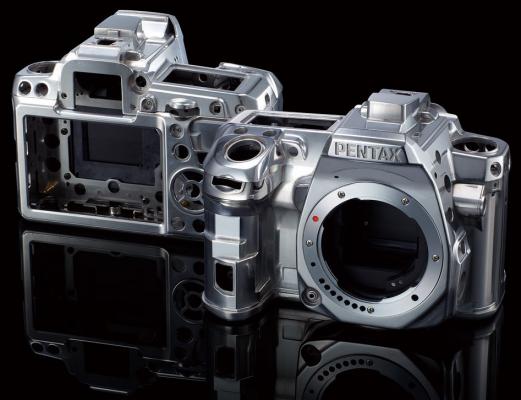 The K-3 sports a magnesium-alloy body and a steel inner chassis and it's clear that no compromises have been made in terms of workmanship.  Nothing on the camera feels flimsy, and its buttons and switches provide great feedback, being neither too loose nor too tight. 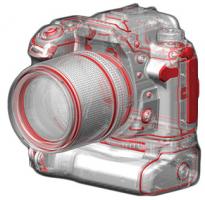 The body is fully weather sealed, cold and dust proof as is the optional grip, and all K-3 camera/lens kits marketed by Pentax come with weather sealed lenses to complement the body as it should be.

No noticeable improvements have been made in terms of build quality when comparing the K-3 to the K-5 II, for the latter already had an outstanding build for its class.  As a variety of external changes have been made to the K-3, it's good to see that no corners were cut in doing so.

The weight of the Pentax K-3 body has gone up by about 60 grams (it now weighs 800g vs. the K-5's 740g), and you might notice this when using smaller lenses.  However, the camera is still rather compact, and its grip has been improved, which makes it feel great in your hands. Compared to competitors such as the Nikon D7100 or D600, there's no question that the K-3 has a better grip (click to enlarge): 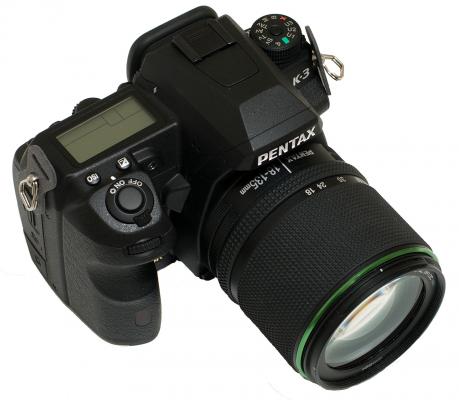 The K-3 has two e-dials, one on the front and one on the back. New on the K-3 is a switch on the back switching between movie and still shooting mode. Add to this a good number of push buttons sprinkled over the back, top and left hand side: 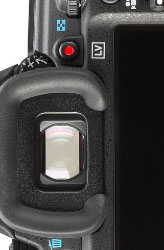 The live view button has been placed next to the viewfinder window. This is most unfortunate and perhaps the only design flaw on the K-3. The button is elevated and protrudes such that it is almost in-line with the eyecup when in use. The result is that when shooting vertically with the viewfinder, the button hits your forehead and live view turns on. This is more than annoying - it can really slow you down.

From an ergonomical point of view all other buttons and dials are well laid out. They are all within easy reach of your fingers and most are easily distinguished from each other by feel, so that the K-3 can be operated also at night. We particularly like the placement of the AF button as compared to the K-5, whereas the AF point selection button at the lower right occasionally can be confused with the menu button.

The four way controller has actually become an eight way controller when you're in the "Select Focus Point" mode. The edges of the four buttons are raised a bit and if you press two neighboring buttons at the same time you can move the focus point diagonally.  The buttons themselves are bigger than on the K-5 and therefore easier to press. 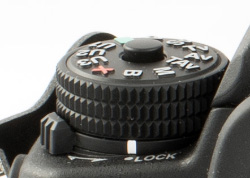 The mode dial on the K-5 has a lock that prevents the mode dial from being knocked out of its setting by accident. The button in the middle must be pushed down before the knob can be turned. The downside is that you can't turn the knob with just your thumb. Users have been divided in two camps about this - some like it, some do not.

With the K-3, Pentax has solved this dilemma by adding a switch that disables the lock. The K-3 thus caters to both camps! Even when the lock is disabled, the click stops offer sufficient resistance that the knob won't easily be moved away from its setting. 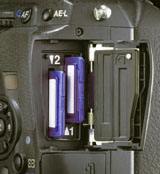 On the right hand side we find a sturdy door covering the dual card slots. The door is opened by dragging it backwards and it opens wide enough that the cards are easy to insert and remove. The cards can be used in three ways as explained on the previous page.

There is a total of four doors covering electrical ports. They are all of the rubber flap type, and in particular the larger one on the left side can be a bit finicky to close properly. If it isn't closed properly the weather sealing of the K-3 is of course compromised. 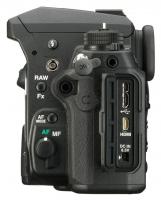 On the left hand side we find three doors covering the following contacts (click thumbnail to enlarge):

One the left hand side just below the flash button we find the X-sync flash contact protected by a screw-in cap. 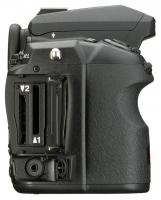 On the right hand side below the card door we find the final flap door hiding the contact for a wired remote like the Pentax CS-205.

None of the cables or accessories to attach to these ports are included with the camera. We would have liked to see at least the USB cable included since USB 3 cables are not yet all that common.

The K-3 has infrared ports on the front and on the back for use with infrared remote controls like the Pentax Remote Control F.  In self-timer or remote mode, both the front and rear ports light up to indicate that the camera is ready or that it is counting down. 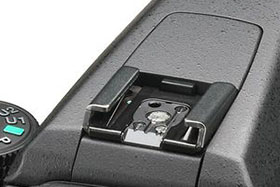 The hotshoe is compatible with all Pentax flashes ever produced as well as with the Pentax O-GPS GPS module. The GPS module adds geotagging support to the EXIF data, but more interestingly, it allows the K-3 to use the sensor shake mechanism to track stars at night as they move across the sky.

Talking about flash guns - while all Pentax flashes will fit and fire, the K-3 does not support the old TTL flash mode, and flashes with no support for the current P-TTL technology can only be used in their manual or auto modes. 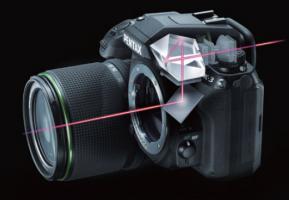 On paper, the Pentax K-3 has the largest viewfinder of any Pentax DSLR.  With a 0.95 magnification ratio, it's even larger than the K-5 viewfinder, which had a magnification ratio of 0.92.  In practice, even while looking through both viewfinders at the same time (with opposite eyes), the difference in size was almost indiscernible.  Furthermore, the Pentax K-3's viewfinder does not appear to be any brighter, despite Pentax's claims that the optical elements had been treated with a superior coating (the coating may have mitigated the loss in light caused by the increase in magnification). The K-3 has a pentaprism finder rather than the darker Pentamirror used in some low end cameras.  The K-3's viewfinder is still dwarfed by 35mm finders such as those found in Pentax film cameras or current full-frame DSLRs.  In the APS-C camp, however, it's best-in-class!

The K-3 takes the same D-LI90 rechargeable Lithium Ion battery as the K-5 series, the K-7 and 645D. The specifications rate the capacity to 720 images without flash usage (the K-5 was rated at 980). This is on the low side and we recommend that you carry a spare or get the battery grip. We suspect that the lower rating is the price we have to pay a faster processor and for having to process larger files.

The battery door is placed underneath the built-in grip and can be opened even with a large tripod mounting plate in place. The battery door handle/lock must be flipped up and turned 90 degrees to open the door - there is no way the door would open accidentally. The battery is further protected from accidentally dropping out by a small spring loaded tab.

The tripod mount itself is aligned with the optical axis.

All in all, this layout of the bottom of the camera is as close to perfect as it gets (click to enlarge). 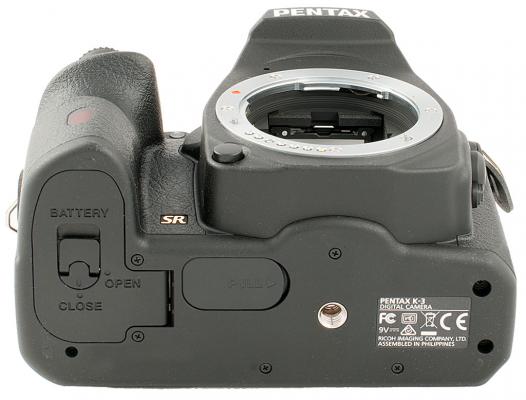 Pentax has developed a new battery grip for the K-3 called the BG-5, which is priced at $199.  This grip is almost identical to the BG-4 used for the K-5 and K-7 cameras, and yet the two cannot be used interchangably due to a modified connector design (it could be that the K-3 uses more power than the K-5 and thus needs different electronics in the grip).  Users on our forum have reported that after making a small change to the connector of the BG-4, it can in fact be used with the K-3, but we do not recommend doing this.  If you are looking for a cheaper alternative to the OEM grip, wait for a third-party knock-off grip without weather sealing.

The BG-5 grip comes with two trays: one that holds a D-LI90 Li-Ion rechargeable battery and one that holds 6 AA batteries. The former tray also has storage space for an extra SD card.

The D-BG5 grip, like the K-3, is fully weather-sealed.  Knock-off grips may feel similar, but they won't have the weather-sealing.  The battery grip's handle isn't quite as large as the main grip on the camera itself, though it certainly still makes the camera easier to hold steadily for vertical shooting.  The overall build quality is good, though the grip itself is made of plastic, and the difference between it and the camera's magnesium alloy body is evident (especially when looking at the silver version).  All the buttons have a very similar feel to those on the body.  The only ergonomic quirk with the D-BG5, like with the D-BG4, is that the rear e-dial is recessed and somewhat harder to turn than the other three. To us as Pentax users, it's a bit disheartening to see that the K-3's new grip hasn't seen any ergonomic improvements compared to the D-BG4.

There's an on/off switch on the grip that's identical to the one on the camera.  This switch only controls whether or not the grip's buttons are enabled; it will not power the camera on if the switch on the body is set to the "off" position.  This design is convenient because it prevents accidental button presses while shooting horizontally, but it also might slow you down if you start off by shooting vertically.

The grip adds a considerable amount of weight to the camera body, which makes it easier to balance the camera when paired with heavy lenses.  It also doubles your battery life and allows you to use AA's in the field, which can oftentimes come in very handy.  If you find yourself shooting lots of verticals, or if you travel a lot, we recommend that you consider adding the grip to your kit.

The Pentax K-3 is solidly built and feels just right in the hand. There is an ample number of push buttons and dials and these are placed so that they are within reach of your fingers, easy to distinguish and operate even in the dark. The physical layout is probably as good as it can possibly be. This is particularly impressive given that the Pentax K-3 is already very compact within its class.  More buttons might solve a few function duplication issues, but apart from that, Pentax has done a great job overall.