Before embarking on the review proper we will present some of the highlights that set the Pentax K-3 apart from its predecessors and in many cases also from the competition. 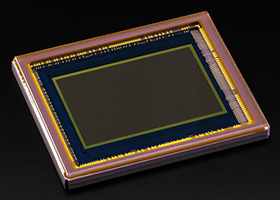 Pentax has finally parted with the 16 megapixel sensor that it used in all previous DSLR models over the past three years. The increase from 16 MP to 24 MP in the K-3 isn't the only big news, however. Neither is the absence of the anti-aliasing (AA) filter, as the K-5 IIs before it was also filterless. The innovation is that the K-3 provides an anti-moire system known as the AA Filter Simulator, a unique feature that no other manufacturer currently offers.

To recap: a camera without an AA filter may produce a false color pattern (moire) when there is a fine, repetitive pattern in the subject being photographed.

Pentax has decided to make clever use of the Shake Reduction (SR) system to suppress moire artifacts on demand.  When enabled, the AA Filter Simulator vibrates the sensor in such a way that it emulates the effect of an anti-aliasing filter, spilling a bit of light from each pixel over to its neighbors while capturing an image.  This helps reduce or eliminate aliasing when the camera goes to produce a full color image from the sensor's Bayer pattern.  The feature works at shutter speeds up to 1/1000s.

Back to the sensor: The 24 MP sensor in the K-3 is manufactured by Sony.

The size of the rear monitor is 3.2 inches diagonally with a resolution of 1,037,000 dots. On paper this is but a minor upgrade over the earlier models, but reality is different. The aspect ratio of the monitor is 3:2, thus matching the image format. This means that the image during live view and playback is significantly larger than on the older 4:3 monitors: 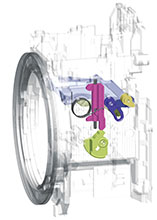 It's important to note that no other APS-C DSLR offers such a shutter durability, with the Canon 7D and the Nikon D7100, the K-3's current in-class competition, as well as the full frame Nikon D610 and Canon 5D Mark III, all lag by 50,000 actuations each. Only the Nikon D800 matches it and only the Nikon D4 and Canon 1DX surpass it, at 400,000 cycles each and all in very significantly different price points.

While we can't test the shutter life, we have evaluated the frame rate and shutter noise later in the review. 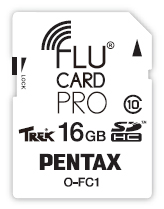 The K-3 can be controlled remotely from a PC, tablet, or smartphone with the optional "FluCard" wireless SD card from Pentax (model number O-FC1). The remote device can view the live image, release the shutter, change the focus point, and adjust basic shooting settings.  Wireless file transfers are also supported.

The FluCard concept was revealed alongside the K-3 in October, 2013, but it wasn't officially announced until late February, 2014. It started shipping worldwide in early March.  In the US, it can be purchased for $99.

Click here for our In-Depth Review of the Flu-card 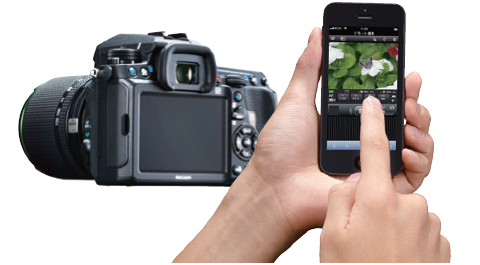 The K-3 sports a new autofocus module with 27 focus points of which 25 are of the cross type. Three focus points in the center are optimized for lenses with large maximum apertures.

This module has the same extreme sensitivity of -3 EV like the K-5 II/IIs. The image area covered by focus points is unchanged - the points are smaller and tighter packed. We'd expect this to mean better tracking capabilities and, obviously with the smaller points, better accuracy when focusing on, say, an eye. We're revealing our findings later in this review.

The light meter has been upgraded from the 77 segment meter which Pentax has been using for the past 10+ years to a 86,000 pixel RGB sensor, which on paper definitely is pro-class, bettering the APS-C competition by a large margin. But does it matter in practical shooting? We'll get to that.

Like previous Pentax bodies, the K-3 is compatible with every Pentax lens ever made, as well as with thousands of third-party lenses.  This includes old manual lenses, and if you have the appropriate adapter, M42 lenses.  This tutorial shows you how to meter with manual-aperture lenses on the K-3. 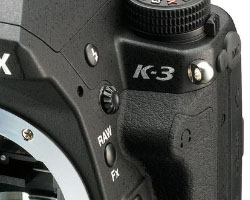 The K-3's movie mode capabilities have been significantly upgraded over those of the K-5. The K-3 has an audio output jack for head phones so that sound can be monitored during recording. Providing space for this additional jack led to the K-3's characteristic bulge on the front.

Manual adjustment of the sound from the microphone is also available with feedback on the rear monitor in the form of a left and right channel VU meter.

Finally, all exposure parameters can be set manually and autofocus is available during recording. All this and more is covered on the movie page further ahead in this review.

The K-3 has a new, much faster processing engine, dubbed PRIME III. This engine is the reason why Pentax was able to increase the frame rate to 8.3 fps even with the image files now being 50% larger than on the K-5 series. 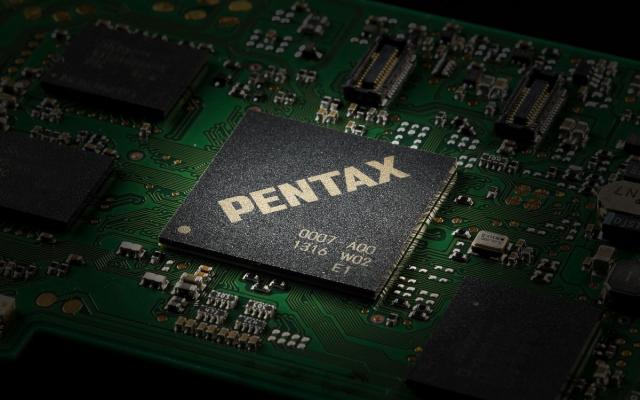 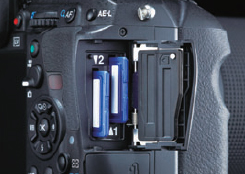 The K-3 has two SD card slots, something Pentax users (other than 645D owners of course) have been requesting for a while. This is particularly handy given that wireless tethering requires a Flu-card to be inserted. One can thus have the Flu card in one slot and a high-capacity/high-speed card in the other.

With two memory cards inserted, the options for image storage are:

In movie mode, you can select which of the two cards is used for file storage.  You cannot do so in sequential mode for stills, however: a strange omission.