Flash guns and flash accessories have not been Pentax's forte in recent years, as the selection is somewhat small compared to other brands.  One of the few specifications that was not improved in the K-3 when compared to earlier models is its flash synchronization speed, which remains at 1/180s.  Based on our initial testing, however, we can confirm that the bounce flash overexposure problem that plagued the Pentax K-5 has been resolved in the K-3, so Pentax has certainly not been ignoring this aspect of the camera. 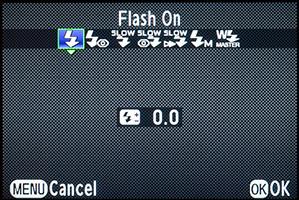 One treat that the K-3 does bring for strobists is the addition of a new dedicated manual flash discharge mode, which lets you control the intensity of the flash from full to 1/128 power.  After selecting the manual flash mode (the second icon from the right above, menu accessed by pressing the down button while in shooting mode), press the down button again and then use the directional buttons or rear e-dial to adjust the flash power.  One slight flaw with this interface design is that to exit the sub-menu and get to other flash modes, you must press the up button first (this annoyance applies to the drive mode menu as well).  It would be nice if the green button brought you up to the top of the menu, or if the front e-dial could cycle through the main options while in a sub-menu (as it already does outside of the sub-menu).

In wireless mode, you can now set up the internal flash to either be the master or the controller for the external flash(es) directly on this screen. On earlier cameras it was a custom function which controlled this. The new design is definitely more user friendly. On top of the manual flash mode, flash compensation from -2 EV to +1 EV is supported for the built-in flash.

The K-3's built-in flash supports a variety of other modes, including slow-speed sync, rear curtain sync, red-eye reduction, and wireless external flash control, which makes it easy to set up an off-camera flash on the fly.  The built-in flash cannot pop up automatically, so it will only fire when you flip it up manually by pressing the flash release button.  Other aspects of flash photography with the K-3 will not be a focus of this review.

Pentax has recently announced two new weather-resistant flashes (the AF360FGZ II and the AF540FGZ II), which should work well with the K-3 in moist or cold outdoor environments.  These flashes can also double as video lights.

With these external flashes (and the earlier models as well) you get some additional flash modes: