Since 2012, various camera manufacturers (including Pentax, with the K-5 IIs DSLR and GR compact) popularized the removal of the anti-aliasing (AA) filter previously found on virtually all DSLR sensors (i.e. those with the Bayer pattern).  The role of this filter was to suppress artifacts in the final image by spilling a small amount of light from each pixel onto its neighbors.   The reason this is necessary is that in the traditional Bayer pattern, 50% of a sensor's pixels are sensitive only to green light, 25% are sensitive only to red light, and 25% are sensitive only to blue light.  In order to get a full color image from this pixel pattern, image processing algorithms must try to guess the missing two color channels at each pixel by looking at its neighbors.  However, if a neighboring pixel is completely unaffected by one of the missing color channels in the original pixel, the image processing algorithm will make a mistake and assign an incorrect color value to the pixel.  This can lead to a variety of artifacts, the most common of which is known as moire.  It is therefore important to have an AA filter if one wishes to avoid these artifacts.

On the other hand, AA filters effectively introduce a slight blur into the resulting image, as each pixel will have some sort of correlation with its neighbors.  Removing the AA filter increases the effective sharpness of a sensor at the expense of introducing an increased risk for moire.

If this explanation was too technical, all you need to know is that moire is a nasty false color or aliasing pattern that can occur whenever you photograph fine, repetitive details (such as textiles or distant fences/roofs) below a certain size threshold.  Things that trigger moire are generally man-made.  The K-3's sensor does not have an AA filter, which means that it is more prone to moire than traditional sensors.  In their ingenuity, though, Pentax engineers have discovered a way to leverage the Shake Reduction (SR) mechanism in the K-3 in order to simulate the effect of an AA filter on demand.  The AA filter simulator microscopically vibrates the sensor in order to get nearby pixels to "see" some of each other's light.  This means that if you want maximum sharpness, you can have it: simply keep the AA filter simulator turned off.  If you want to avoid moire, on the other hand, just turn on the AA filter simulator in the camera and it will often fully vanish, at the expense of a small drop in sharpness (the same effect that a hardware AA filter would have).

Here is an example of what moire looks like: 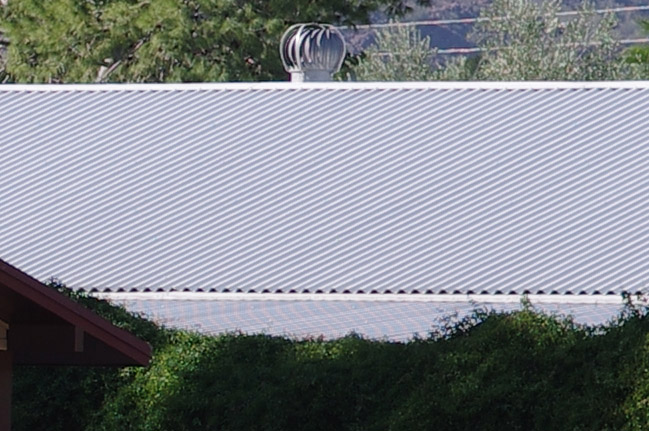 With an anti-aliasing filter, the false color pattern in the lower portion of the roof disappears: 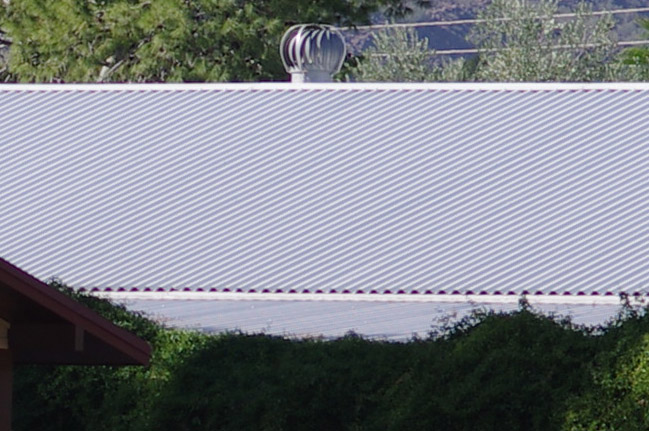 The photos above are just examples taken with the Pentax K-5 IIs (filterless) and K-5 (not filterless).  Note that moire typically only occurs under the following conditions:

Now that you know the ins and outs of moire, let's take a look at how the Pentax K-3 handles it!  Our moire test scene is a seemingly-innocent landscape photo shot at F5.6 with the Pentax 35mm Limited Macro lens: 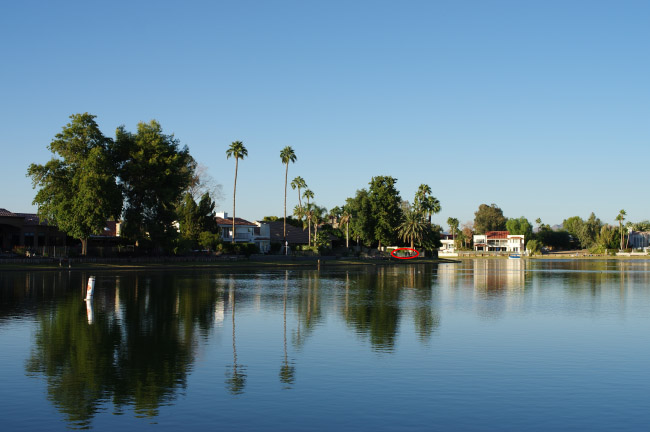 The area circled in red, a fence, exhibits prominent moire when we zoom in to 100%. Notice how there is a repeating purple-and-green rainbow pattern in the fence: 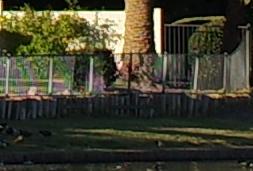 The K-3 offers two different ways to combat moire in-camera.  You can either use the AA-filter simulator (which has a Type 1/weak and a Type 2/strong setting) or reduce moire via the retouch menu in playback mode (which has a weak/medium/strong setting).  The latter is new to the Pentax K-3, though we did see it earlier this year in the Ricoh GR.

The table below shows an example of the results obtained using both methods.

Here we see that the AA filter simulator works exactly as one would expect, which is actually quite impressive considering that Pentax is a pioneer with this feature.  The Type 1 mode introduces less of a blur but removes less moire, while the Type 2 mode almost full removes the false color while introducing a more noticeable blur.  In both cases, however, the moire is still discernible, but with Type 2 mode you probably wouldn't ever notice it without being told.  What's more interesting, however, is the performance of the software removal moire tool.  The strong setting proves to be about as effective as the AA filter simulator without introducing any additional blur.  It does seem to de-saturate the image slightly, but this isn't the case with the medium setting.  Regardless, this shows that software moire removal is very effective.  With desktop software such as Adobe Camera Raw, moire can be removed selectively without affecting other areas of the image.  The AA filter simulator has one key advantage over this approach: it doesn't add any post-processing overhead, as the moire will already be reduced in the original photo!

To evaluate the real-world impact that the AA filter simulator has on sharpness, we photographed the same scene with the K-3 (using all 3 AA filter simulator settings), the K-5 IIs (filterless), and the K-50 (AA filter).  Below we also include a K-3 Type 2 photo with an unsharp mask applied in Photoshop. Click on any thumbnail below to view a 100% crop of the original image.

The K-3 gives the user an unprecedented level of control over moire.  You can leave the AA filter simulator off for maximum sharpness or enable the AA filter simulator to minimize moire.  If moire ends up unexpectedly making its way into one of your photos, you can also always remove it in-camera via the playback menu.  In other words, we believe that the K-3 "solves" the moire problem for good, as the level of flexibility offered by the K-3 really couldn't be any better.

If you're the kind of photographer that doesn't want to deal with moire whenever possible, you can safely keep the AA filter simulator set to Type 2 at all times.  Just remember that it only works at shutter speeds up to 1/1000s! As we show above, the K-3 holds a noticeable advantage over the K-5 IIs in terms of resolution, and after we applied an unsharp mask to the Type 2 photo, it ended up being just as detailed as what the K-5 IIs produced out of the box.  The Type 2 filter simulator- or just about any AA hardware filter- can't guarantee that moire won't affect your photos, but it certainly does reduce the risk significantly.

So, to conclude, the key advantage of the Pentax K-3 over other cameras is that it allows users to reduce moire without forcing them to use post-processing tools to do so.  However, since software removal of moire seems to be getting more and more effective, it is likely only a matter of time until other companies make moire removal a part of their JPEG processing suite, much like aberration and vignetting correction already is.  For now, though, Pentax still holds an advantage thanks to the fact that its DSLRs are the only ones to currently feature sensor-based stabilization, which is what powers the AA filter simulator.

We'd like to make note of one important point before moving on to the next page.  Even though the Pentax K-3's filterless sensor design promises an increase in image quality over sensors with an AA filter, it has been our experience that unless you are shooting with a high-end prime lens or zoom, the benefit in resolution isn't discernible.  Try comparing a photo from the Pentax DA 55-300mm F4-5.8 with a photo from the DA* 60-250mm F4 with and without the AA filter simulator: the difference will be hard to spot when looking at files from the consumer zoom.

Next: Detail and Noise