The Pentax K-3 features a robust movie mode with all of the enhancements that Pentax has been rolling out in its entry-level cameras over the past year and a half, and then some.  Its predecessor was rather dated in this respect, so Pentax users upgrading from the K-7 or K-5 to the K-3 will undoubtedly notice a big improvement to the movie mode.  Between the K-30 or K-50 and the K-3, the difference is not quite as significant, but the K-3 does have an external microphone input, unlike Pentax's current entry-level DSLRs.

Previous Pentax bodies have generally been lagging behind the competition in terms of video.  On this page, we'll see if that changes with the K-3.

The Pentax K-3 saves .MOV video files using the H.264 codec.  There are no other supported formats, nor is there a video quality setting in the camera.

Exposure can be fully automated (P mode), semi-automatic (aperture priority/Av or aperture+shutter priority/TAv), or fully manual (M).  Exposure settings, including the ISO, can be adjusted during recording.  While the P, Av, and M modes have already been available in the K-30, K-50, and K-500 cameras, it looks like video TAv is brand new to the K-3.

Audio can be recorded through the built-in monaural microphone at a sampling rate of 48 kHz (improved over the K-5's 33 kHz), or through an external stereo microphone.  New to the K-3 is a headphone jack, which allows you to hear what the microphone hears, or listen to your videos in playback mode.  The built-in microphone's audio quality still isn't stellar, so we would recommend getting a small external mic, even for everyday videos.

With the Pentax K-3, you will no longer find the movie mode on the mode dial.  Instead, Pentax has added a switch to the back of the camera that allows you to go straight from any stills capture mode to movie mode.

Although we are happy to see that the movie mode is no longer a part of the mode dial, there are two fundamental flaws with how Pentax has set up the new button interface for video: there is no way to start recording videos while in stills live view mode, nor is there a way to capture stills while in video live view mode, since both the red button and the shutter release button have the same effect in video mode.  Pentax should have kept a separate live view button and used the red button as a quick means of starting video recording (in addition to other customization options for users not interested in video).  It also would be a simple change to make the shutter release button take stills in movie mode.

Now that we have the bad out of the way, let's focus on the good.  Pentax has added a dedicated info screen to the video mode, which makes it easy to change key settings while in that mode, without having to go into the main menu: 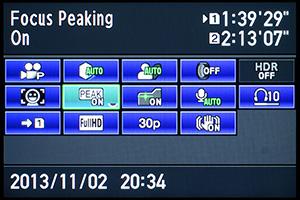 This info screen is accessed by pressing the "info" button at any time while in movie mode.  The mirror does flip down as soon as you enter this menu, which is something Pentax should address in future models (on previous models, the camera would exit live view whenever the mode dial was turned; fortunately, this was one of the things that the K-3 did fix).  Another quirk is that after you exit the info screen, a pop-up menu will be shown allowing to enable or disable the standard information display.  This is necessary due to button duplication.

Regardless, through the info screen menu, you can control the following settings:

The white balance and custom image menus are also available in video mode.

Even though the K-3 has a dedicated setting for focus peaking in its video info screen, the focus peaking is unfortunately unavailable during actual video recording.  It simply disappears as soon as you start recording.

Furthermore, even though there is a plethora of contrast detect AF options to choose from before recording, during filming the AF implementation is very basic (the same that we've seen in the K-01, K-30, K-50, and K-500).

The K-3 will autofocus during recording whenever you press and hold the AF button.  The focusing is very slow (likely to keep audible noise levels down) and tends to hunt with longer lenses.  All the fancy CDAF options are ignored, and the camera simply analyzes the whole scene and focuses on where it thinks it should, which isn't always where you want it to.  In other words: the K-3's video AF won't help you focus on a moving subject or focus on anything when time is of the essence.  Its only real use is to ensure that the scene is still in focus after moving or zooming, as there are no manual focusing aids during recording.

The video below gives you a quick overview of the K-3's video settings as well as its autofocusing capabilities:

The Pentax K-3 implements video Shake Reduction electronically, likely to keep audible noise to a minimum while recording. Although the SR mechanism does make some noise to keep the sensor locked in position while recording videos, it is quieter than when it operates to stabilize the live view image in image capture mode.  Electronic stabilization has a tendency to introduce artifacts due to the way that it operates, and it requires that the frame be cropped substantially.  It seems that the K-3 is subjected to a 1.2x crop, approximately.

Even though sensor-shift shake reduction (such as that used in the K-5's video mode) would solve the artifact issue, it is still not as desirable as in-lens stabilization (which is only available for Pentax through a handful of Sigma lenses).  When combined with the K-3's slow video autofocus, this makes the K-3 a sub-optimal tool for everyday video recording, as even an older Canon Rebel can best its speed.

The K-3's video files are saved using in .MOV format using the H.264 codec with lossy compression, the same one already in use by the Pentax K-30, K-50, K-500, Q series, and K-01.  Interestingly, the K-3 doesn't offer a video quality setting, which means that the user is in no way in control over the degree of compression used.  Because of the format it uses, the Pentax K-3's video files will be more universally-compatible than the .AVI files from the Pentax K-5.  The K-5's files would often be difficult to open with consumer video editing software.

Due to the compression that's employed, you can expect a drop in video image quality compared to what we've seen from the K-5.  To give you an idea of how much compression is being done, compare this frame extracted from a K-3 video to a still photo taken at the XS (1920x1080) JPEG fine setting.  The still image has been upsampled to match the 1.2x crop of the extracted frame.  Exposure settings were kept constant at ISO 100.

Even though the compression takes a toll on detail, noise levels are in fact surprisingly-low, even up to the maximum video ISO of 3200.  You still get much less dynamic range than you would in an uncompressed video file, though.  The K-3 is also subject to the rolling shutter jello effect that we've observed on the K-30 and K-50 cameras.

While recording videos, we've observed that the recorded file and live view image briefly freezes (for about a split second) while zooming with our 18-135mm lens or changing the aperture setting manually during recording.  This can prove to be very distracting especially when trying to keep a subject in the frame.

We've found that this occurs whenever you manually dial in an aperture setting on a variable-aperture lens (because the aperture has to be adjusted by the camera's actuator in order to remain constant as the focal length changes), or when you change the aperture manually during recording with any lens. The two sample videos below demonstrate this issue.

Video 1: Av mode with manual changes to the aperture setting

Zooming with a fixed-aperture lens does not provoke this issue, nor does it occur in P mode.

The K-3 has the most capable video mode of any Pentax to date, but the best is unfortunately not good enough to beat the competition.  While the K-3's video mode has been enhanced with higher frame rates, a headphone jack, better audio sampling, and full manual controls, there are a few things that will still prevent the Pentax K-3 from being an ideal candidate for shooting videos.

One issue is the K-3 stabilizes its videos electronically, which may introduce unwanted artifacts.  Sensor-based stabilization is noisy and might be audible while recording, so it seems that Pentax has decided to refrain from going down that route altogether (the K-5 did have mechanical SR in video mode, but future cameras did not).  In-lens stabilization would be the best choice for video for when you're not on a tripod.

Second, the K-3's video autofocus is still very poor.  There is no continuous AF, and the on-demand AF that has been added is too slow to be dependable.  Furthermore, the lack of focus peaking during recording also makes manual focusing tough.  This was a feature that had otherwise hoped for.

Last, the image quality isn't stellar due to compression.  It's about the same as on the Pentax K-30 and K-50 with perhaps a little less noise, but it's certainly not pro-grade.  The fact that the frame freezes while zooming with variable-aperture lenses or changing the aperture manually doesn't help, either.

To conclude, while the K-3 offers a great deal of flexibility with its new video exposure modes and external microphone/headphone jacks, it did not impress us overall in terms of its video capabilities, which might be the camera's weakest link.