In this comparative review, we take a look at three attractive intro- to mid-range APS-C DSLR cameras available as of October, 2012: the Canon Rebel T4i (EOS 650D), Nikon D5100, and Pentax K-30.  This isn't an in-depth review of each camera, but rather a comparison of many of the key features that users interested in these cameras may want to learn more about before deciding which one to buy.  The areas that we will be focusing on include handling, build quality, user interface, video performance, autofocus, shooting stills, and value.  For an in-depth look at the K-30 on its own, see our K-30 review.

We picked these three cameras because their specifications are all very similar, as are their prices.  Is there a top performer from among the three?

Originally announced in April, 2011, the Nikon D5100 is the oldest camera of the bunch.  Even though the other two cameras are much more recent, the Nikon never showed its age during our tests.  Canon annonced the T4i in June 2012, while the Pentax K-30 was announced in late May 2012.

We tried to make this comparison as fair as possible, which is why we ordered each camera together with the 18-55mm kit lens as well as a comparable normal prime lens:

Getting one of these lenses together with your camera is an easy way to ensure that you'll be getting top-not photos with your camera, as they are sharper and faster (in terms of aperture) than the kit zooms.

Below is a photo of all the equipment as well as the original packaging: 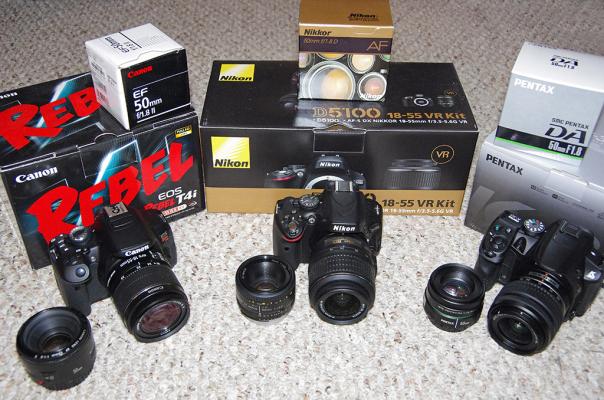 The contents of each camera kit were very similar, so we will be skipping the traditional "what's in the box" section.  You can expect to find the following accessories when you unbox your camera:

The Nikon also comes with an A/V cable, while the two other cameras do not.

Ready to get your Canon T4i or Nikon D5100 or Pentax K-30? Click below to place an order or check current pricing.