While the overall performance of the Pentax K-5 II is very good, the technology it inherits from the K-5 is without a doubt starting to show its age.  With the launch of the Pentax K-01, Pentax released a new, faster processor called PRIME M, but this processor has not been deployed in the K-5 II.  The new processor did, however, make its way into the new mid-range Pentax K-30 DSLR.  This means that Pentax's new flagship is slower than the K-30/K-01 in areas such as general playback speed, instant review, and file deletion.  While many won't notice the K-5 II's slowness, let alone be bothered by it, enthusiast users, as well as those coming from other DSLR brands, may well find it a bit annoying.  It should be noted, however, that the limitations of the PRIME II processor found in the K-5 II don't generally get in the way when it comes to shooting stills, and the camera can shoot at a high 7FPS frame rate, which is only beaten by the Canon 7D among APS-C DSLRs.

Here are a few examples of areas in which the K-5 is behind the competition:

The main weak point of the K-5 II is live view and video.  Live view has noticeable latency, and the contrast detect autofocus system has not been improved since the K-5.  On average, the K-30 thus focuses faster in live view than the K-5 II (see the numbers here).

The K-5 II's video mode offers no manual controls beyond exposure compensation, no focus peaking, and limited framerate options, including only 25FPS in full HD and 30/25 HD in 720p.  In addition, the camera can only write .avi video files rather than the now-preferred H.264 .mov format.  One problem with the .avi format is that without re-encoding, an annoying periodic clicking sound can be heard in many video players (including Youtube).  This is caused due to a slight incompatibility between the various codecs being used to play back the files.  Here is an example of a video with this problem:

On a positive note, the K-5 II does have a built-in stereo microphone as well as an external microphone jack.  There is no autofocus during video; only prior to starting recording.

Ready to get your Pentax K-5 II / IIs? Click below to place an order or check current pricing. 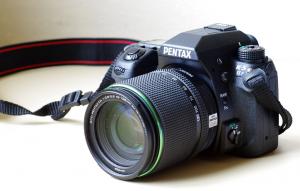